Cutting it down to size

Without micromachining, we’d still be watching the Red Green Show on tube-style TV sets and calling Aunt Emma on a rotary dialer to discuss the family reunion. Contact lenses wouldn’t exist, smart devices would be dumb, computers would be the size of a house. But what is micromachining, and how does it differ from hogging out a block of 6061-T6 aluminum, or ploughing a hole big enough for a golf ball in a chunk of tool steel?

Smaller than small
John Bradford, micromachining R&D team leader at Makino Inc., Auburn Hills, MI, defines it in several ways. “The first element is size. Any part or part feature 1 mm (0.0393 in.) or smaller is considered a micromachining application. Secondly, there’s surface roughness. A part may measure 300 mm square (12 in.), but require 0.1 micron Ra or better surface finish; that’s also micromachining. Lastly comes accuracy—location of a part feature relative to a datum or other feature to a tolerance of +/- 3 microns (0.00012 in.) is the third element of micromachining.”

Micromachining requires far more than tiny endmills and good eyesight. It takes ultra-accurate cutting tools and holders capable of near zero runout. Nor will any old milling machine work when interpolating pockets smaller than a bee’s knee. Bradford says there are a number of machine tool features necessary for milling microparts. 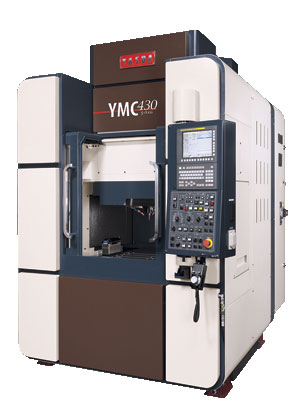 Plenty of spindle rpm is clearly high on the shopping list for micromachining, as is an HSK or comparably precise spindle interface. And with the accuracy requirements Bradford describes, a motion control system with sufficient resolution for micro-scale interpolation is critical. Yet those attributes mean little without stability. “Starting from the standpoint of machine design and construction, micromilling processes require a very high level of thermal stability,” Bradford explains. “Without this, you’ll be unable to attain high repeatability when you have to make a second part, a third part, or a hundredth part.”

Don’t try this at home
As proof, Makino runs its micromilling solution—the IQ300 vertical machining centre—through a rigorous testing procedure. Starting with a workpiece blank, the top surface is machined to create a known datum, and a small dimple is cut in the surface of the part. Over the next 90 minutes, the machine is cycled continuously through its entire range of motion at maximum feedrate and with the spindle maxed out at 45,000 rpm. A second dimple is then cut, and the process repeated until a total of 12 dimples have been machined.

A white light interferometer is used to measure the Z axis depth of each dimple, and a CMM is used to check each X and Y axis location; to pass the test, a deviation of no greater than 1 micron (0.00004 in.) is allowed in any direction. “The results are generally better than that, usually we see 0.3 to 0.4 microns total deviation over 18 hours,” Bradford points out. “We feel this is an accurate representation of the accuracy required for micromachining.”

With accuracy like this, the choice of CAM system becomes very important. “The IQ300 can make a 10 nanometre movement in any axis direction. Because of that and a number of other reasons, these machines follow the programmed toolpath very faithfully. When you get into machining very small surfaces—say a three dimensional contour—and need to maintain average surface roughness of 100 nanometers, then as a rule the tool path accuracy should be one-fourth of this value, or within a 25 nanometer output tolerance. Not every CAM system can do this.” 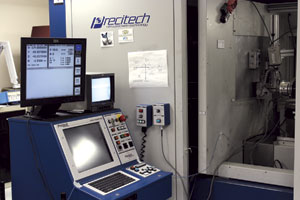 Die mould project manager Jeff Johnson from Methods agrees that the choice of CAM software is critical with microparts and other types of super-accurate machining. “A good surface-based programming system is very important to successful micromachining. Operating a high tech machining centre with questionable G-code or toolpaths with high chordal deviation is a little like filling a top fuel dragster with regular pump gas. You get poor results, including unexpected surface deviations, broken tools and unacceptable surface quality.”

Not so fast
There’s a misconception in the machining industry, one that Johnson would like to clear up: while spindle speeds of 40,000 rpm or more are an important component of micromachining, equally important is spindle and machine rigidity. “Some people think that because you’re not taking heavy cuts, rigidity is less important with micromachining,” Johnson says. “But without rigidity, cutting tools will not last.”

Consider a Tom Thumb-sized cutter plugging along with a chip load of 5 microns (0.0002 in.) per tooth—spindle float or axial deviation of even half a micron means an abrupt 10 per cent change in the depth of cut. Adios, Tom Thumb.

Avoiding catastrophes like this requires a machine equipped with linear drive motors and thermal management, Johnson says. “The YASDA YMC 430 uses a closed loop cooling system to maintain constant temperature within 0.2° C (0.36 F), allowing the machine to cut continually for days while maintaining consistent machine accuracy. And with linear motors there are no ballscrews, which not only makes the machine faster but also eliminates reversal error. Together this provides for extremely accurate motion control, assuring the accuracy and stability needed for micromachining.”

Once tool life is assured, it still has to be measured and monitored, something that can be problematic at this scale. For this reason, Yasda incorporates the Dyna Vision Pro camera from BIG Daishowa, Osaka, JP, which uses a 600X magnification lens and high pixel CCD camera to measure tool length, diameter, and profile to within to 0.1 microns (0.000004 in.), even while the spindle is running at full rpm, Johnson explains.

As components grow ever smaller, machines such as this are becoming increasingly necessary. Johnson and his colleague, Yasda product manager Steve Previti, agree that micromachining is used widely in mould and die manufacturing, especially in the optics industry. “Much of this is in the LED market such as those used in television sets, backlights for cell phone cameras, and so on,” Previti says. “But we’re also seeing a lot of work in optics fixtures, waveguide manufacturing, telemetry devices, and other discrete components.”

The ultra-small, ultra-precision nature of these components is only possible with the equally precise machine tools, toolholders and cutting tools: expect an investment of $400,000 or more for the right micro machining centre for the application.

Despite the cost, the companies supplying these wares continue to push the limits on what’s possible, giving manufacturers the potential to cut ever smaller features, hold tighter tolerances and surface finishes undreamed of only a few years ago. The next time you’re watching a rerun of the Red Green show on your big screen LED TV, take a moment to consider the micromachining that made it possible. Happy viewing. SMT

Kip Hanson is a contributing editor.