Laser welding with CO2, fiber and various types of solid state lasers is a well established process currently utilized in a wide range of industries and applications.

However, recent technological developments in high power diode laser technology have expanded the capabilities of laser welding, as well as changed its cost characteristics. As a result, diode lasers are poised to replace traditional laser sources for some applications and to expand laser welding implementation into entirely new areas.

Most laser welding techniques can be classified into two basic categories, “keyhole” and “conduction mode” welding. Both of these welding modes are capable of being performed autogenously, that is, no filler metal is added to the joint. Keyhole, or deep penetration welding is commonly encountered when welding thicker materials. In keyhole welding, the laser is focused so as to achieve a very high power density (typically at least 1 MW/cm2) at the work piece. At the center of the focused beam (where the laser power density is usually highest) the metal actually vaporizes, opening up a blind hole (the keyhole) within the molten metal pool. Vapor pressure holds back the surrounding molten metal and keeps this hole open during the process. This metal vapor also re-radiates laser energy into the molten metal along the side of the keyhole, thus transferring energy through the entire depth of the keyhole resulting in a weld with a deep aspect ratio. 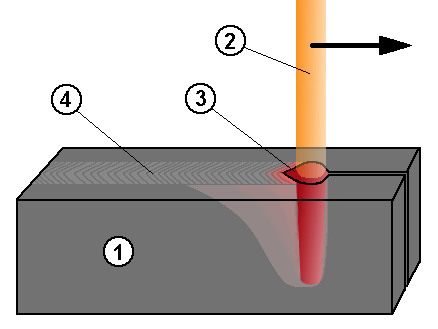 The small size of the keyhole region results in a relatively small fusion zone and heat affected zone. Furthermore, the highly localized application of heat means that the work piece both heats up and cools down rapidly which can minimize grain growth in high strength, low alloy steels. Even though no filler material is typically used for keyhole welding, the high temperatures of keyhole welding can vaporize volatile materials, producing a different composition in the fusion zone than in the base metal. Also, with hardenable steels, the rapid cooling generates fully martensitic fusion zones and hardened heat affected zones.

In contrast, if the threshold laser power required to initiate a keyhole is not reached, then only surface melting occurs. Because laser energy is absorbed almost entirely at the surface and heat transfer into the bulk material occurs by conduction, this is called conduction mode welding. Conduction mode welds are typically shallow and most often have a bowl-shaped profile. The heat affected zone is larger than for a keyhole weld and the transition from the fusion zone to the base metal is smoother and more gradual.

In terms of material changes, the less aggressive heating cycle produced with conduction mode welding avoids the formation of martensite and generally doesn’t evaporate lighter alloying metals. Thus, changes in alloy properties between the base metal and fusion zone are minimized.

Several different laser technologies are currently employed for welding. The specific characteristics of each laser type (e.g. physical, output beam and cost factors) determine the way in which a particular laser type can be used for welding.

The most commonly encountered welding laser types are CO2, solid state YAG (lamp-pumped or diode-pumped) and fiber lasers. While high-power diode lasers have also been available for a few years, they are now beginning to be utilized for appropriate welding applications. The table below summarizes the primary output characteristics and practical features of the various laser types used for welding.

CO2 lasers output at a wavelength of 10.6 μm, which is well into the infrared. Typically, they produce a high power, well collimated beam of a few millimeters in diameter. While the infrared light of the CO2 laser is not well absorbed by most metals, the combination of very high power and small beam diameter yields the power density necessary to initiate keyhole welding. However, their infrared light cannot be delivered by optical fiber and can present limitations in terms of how the laser is deployed in actual production settings.

In solid state lasers, the light from either a lamp or a series of diode lasers is focused (or pumped) into a laser rod which then emits a small, well collimated beam of laser light in the near infrared (typically at 1.064 μm) which can be fiber delivered. A variant on this is the disk laser in which the solid state laser medium is disk shaped instead of a rod; disk lasers are all diode pumped and never lamp-pumped. Solid- state lasers are mostly used for conduction welding.

The basic configuration of lamp-pumped solid state (LPSS) lasers makes them electrically inefficient; furthermore, lamps must be replaced every few months which raises operating costs and results in maintenance downtime. However, this legacy technology is well established and understood, therefore some industries have been slow to move away from it. Diode-pumped solid-state (DPSS) lasers offer significantly better reliability, longer maintenance intervals and lower consumables cost than LPSS lasers. However, their initial purchase price is higher putting their long term cost of ownership on a par with LPSS lasers.

Fiber lasers are conceptually like DPSS lasers, however, the laser rod is replaced with an optical fiber as the laser medium. Single mode fiber lasers (which produce very “pure” light that can be focused to the smallest spot size) deliver output in the same power and wavelength range as DPSS lasers. Moreover, they can be focused to the small spot size needed to achieve the power density necessary for keyhole welding. Multimode fiber lasers can deliver tens of kilowatts, but in a larger spot size, and hence lower power density. They are suitable for both conduction mode and keyhole welding applications.

The output characteristics and physical properties of the various traditional welding lasers lead to a number of practical and cost limitations. In response to the need for a more optimal source for this application Coherent has developed the HighLight series of products. These products are based on high power diode laser technology.

The diode laser is a semiconductor device that directly converts electrical energy into laser light. Typically, higher power diode lasers output in the near infrared, most commonly in the 800 nm to 1000 nm wavelength range. A typical, individual diode laser emitter might produce at most a few Watts of output power. However, numerous emitters can be fabricated on a single monolithic semiconductor substrate or bar with a total output as high as 150 W. These linear bars can, in turn, be combined in horizontal and vertical stacks to produce high-power direct diode laser systems with total output power in the multi-kilowatt range.

The maximum conversion efficiency of transforming input electrical energy into light in diode laser bars is about 59%, which translates into a total electrical efficiency of about 40% for a high-power diode laser system. This is many times higher than for any other laser type as can be seen in the previous table. The primary benefit of this high efficiency is that it lowers the operating cost of the system since less electricity is required to produce a given amount of output power. Of course this reduced power consumption also decreases the carbon footprint of the laser’s operation.

The small size of diode lasers makes them easier to integrate into workstations. It also means that they produce their waste heat in a relatively small physical area. As a result, they can be effectively cooled with a small volume of circulating water and a chiller.

The Coherent HighLight series of diode laser systems are designed for industrial processing applications such as welding, heat treating and cladding. The diode laser product line consists of multiple models, including the 4000L which offers 4 kW of output power at 808 nm. The nominal beam size from this laser is 1 mm x 12 mm at a 100 mm working distance. A variety of optical accessories are available so that the output can be well matched to the needs of specific applications. Another model is the1000F which is a high brightness, fiber-coupled system that delivers 1 kW at 975 nm from a 600 μm core optical fiber. The combination of small size and fiber delivery make the 1000F particularly easy to deploy in industrial environments space and access to electrical and water service are an issue. Furthermore, its small spot size makes it particularly well matched to the requirements of many thin metal and plastic welding applications. 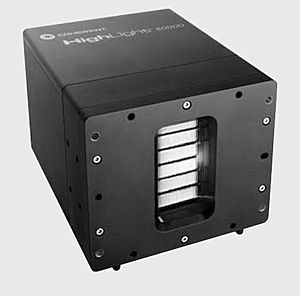 These laser systems deliver an ideal combination of reliability and ease-of-use due to the implementation of advanced technology in diode construction, stringent process control and state-of-the-art packaging, as well as practical systems convenience factors. We’ve engineered our MCCP technology to make it robust and reliable as confirmed by field data and ongoing life testing.

As mentioned previously, a primary advantage of HighLight lasers for welding is the substantial cost of ownership savings derived from their electrical efficiency. Additionally, the laser has instant “on” capability so there is no standby power consumption.

Even larger savings result from reduced maintenance costs, which are orders of magnitude smaller for the HighLight as compared to other welding lasers. Maintenance downtime is also minimized because the physically compact laser can be more rapidly replaced than bulkier lasers and if required, replacements can even be shipped via overnight courier services.

Welding with lasers: when and where

HighLight direct diode lasers are best employed for conduction mode welding of thin metals for applications in which cost is a prominent factor (both purchase price and operating costs) and in which practical considerations such as floor space and part access are important. Additionally, the ability to deliver the output through long lengths of optical fiber provides a high level of flexibility in terms of where the laser system is located. It also enables beam delivery into tight or hard to access spaces. Typical uses would therefore be under-hood welding of components in automobile manufacturing and welding of heat-sensitive devices.

More importantly, the lasers can often be utilized with limited process changes, meaning that there is not a significant learning curve in a transition. Specifically, they can typically be employed with the same materials and alloys which are currently processed with other laser and/or non-laser technology. Typical examples are medium and high-carbon steels which tend to form an undesirable martensitic fusion zone when subjected to the high temperatures and fast temperature cycling experienced with keyhole welding. Galvanized (zinc coated) steels commonly used in automotive applications can also be welded with these lasers. Again, these are problematic with keyhole welding because the zinc melts rapidly whereas the lower temperatures of conduction welding result in a fusion zone, which has a uniform dilution of zinc and steel with no porosity.

Stainless steel is also well suited to conduction mode welding with diode lasers, particularly in applications where the corrosion resistance of the weld is critical. Typical examples are in medical devices, nuclear reactors and aerospace components. Again, this is because the lower process temperature doesn’t cause removal of more volatile alloying elements from the fusion zone. Additionally, stainless steels are generally increasingly reflective at longer wavelengths so the shorter wavelength of the diode laser results in incrementally better light absorption and thus higher efficiency than with older laser types.

The higher absorption of shorter wavelength light is even more pronounced in aluminum which has a very significant dip in its reflectivity in the near infrared. Aluminum alloys containing volatile alloying materials such as magnesium, which is difficult to keyhole weld, can often be successfully welded with diode lasers.

The Coherent Highlight Laser is an innovative tool for solving many conduction mode welding problems. Additionally, it delivers a number of distinct advantages over other laser sources. These include: