For job shops and manufacturers that rely on laser welding to provide the finish and precision welds other welding methods can’t, one problem has always been inspection.

While a welder can visually monitor a GTAW or GMAW weld while laying down the bead, the automatic nature of laser welding precludes that. Traditionally that’s meant that a laser weld can only be tested by pulling it out of its native state [ex-situ], tearing it apart and looking at it.

However, with the latest weld monitoring systems from the likes of Laser Depth Dynamics and Precitec, users can reap a wealth of information about their welds as they’re happening.

Laser Depth Dynamics’ inline coherent imaging (ICI) system connects to a laser weld head assembly through a camera port. It then couples a measurement beam with a unique wavelength with the laser beam. The measurement beam is reflected from the surface of the workpiece back to the measuring instrument, which then determines the depth of weld penetration. ICI, with its new 3D module, now can track joints, follow height and do post-weld inspection to measure underfilled areas and surface pores in one glance. This in turn can generate 3D surface images of parts that can be used for future part setup and robot teaching.

Measuring actual weld depth while the weld is being made supplants the need for after-the-fact destructive testing because ICI can look into the keyhole created by the laser beam and measure its penetration hundreds of thousands of times per second. Then, when something goes wrong, a user knows how to address the problem at the source.

“Previously the only option for direct weld depth measurement was ex-situ destructive testing,” says Chris Galbraith, applications specialist with Laser Depth Dynamics, Kingston, ON. “Our customers have a complete record of each weld they produce as soon as its finished. Instead of asking what percentage of their parts likely contain defects, our customers can ask exactly how many are defective, exactly when they were produced and even what went wrong.”

Just as important as the data that comes out during the weld is the setup that allows those welds to be done in the first place. Laser welding, because it’s done by machine, is much less tolerant of gaps and waves in the workpiece. A human welder with a GMAW torch can see those gaps and compensate on the fly.

That’s why Precitec, for one, concentrates a lot of its energy on customers’ fitup. Using simple triangulated measurements, the company helps customers set up their welding pieces precisely so that their laser welds don’t invite the porosity that leads to weld breakage.

The joining or fusion of metal components by lasers requires establishing good process parameters. When those process parameters are finalized, the goal is to ensure they remain constant, and that’s the idea behind the use of the Laser Weld Monitoring (LWM) system,” says Brad Trees, sales manager for Precitec, Wixom, MI.”

Data collected during welding provides companies with historical confirmation that their parts are being welded with a consistently good process, says Trees. 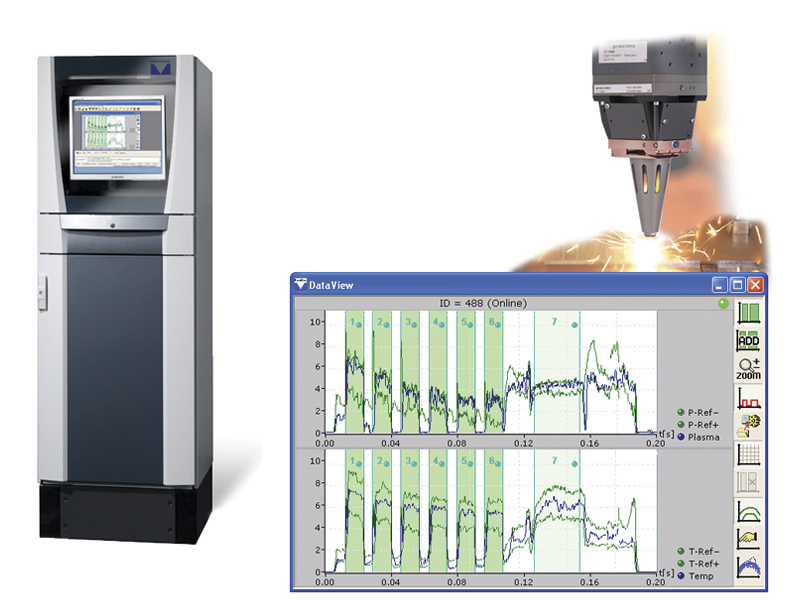 Precitec’s LWM system employs a set of sensors (diodes) set at different wavelengths that look at the weld spot/metal pool on the workpiece while it is being welded. LWM measures a variety of wavelengths of light, including infrared (heat) of the weld point and the intensity of the plasma created from the welding process in the weld puddle. Further sensors include the amount of back reflection of the laser wavelength itself from the laser weld spot and the monitoring of the incoming laser power into the welding head. The intensity of the signals is captured and displayed on a graph, which looks like a statistical process control (SPC) chart with upper and lower control limits.

Trees says there’s a “learning” process for the LWM system to build a baseline profile of what an acceptable weld is and this is what all future welds are compared to to determine if weld process is consistent. You take several measurements of a good part or process and determine the average signal and then calculate upper and lower control limits using percentages that allow process variation but still identifies unacceptable parts or weld process deviations.

As more and more manufacturers connect their operations via initiatives such as Industry 4.0, the need for quantitative data from excellent monitoring systems increases. The problem is that some people don’t see the connection between all that data and their everyday welding, says Paul Webster, chief technical officer at Laser Depth Dynamics. “The escalating customer requirements for quality and efficiency demand more data from more sensors,” Webster says. “Every measurement taken on a line is an opportunity for future improvement, However, the volume of data and the complexity of proper synthesis make the creation of actionable data a real challenge. Technology can provide many interfaces for interconnectivity, but the real barriers for interconnection and use of process data are human.”

The precision and repeatability of laser welding makes it an attractive choice for production welding operations, but its complexity creates all new demands, Galbraith says. Buying into a system that can monitor all those variables makes the process’s advantages worth the additional investment.

“Laser welding is physically more complex than a lot of more traditional processes,” Galbraith says. “The energy concentration is higher, it’s turbulent, it can be unstable. We make it possible for our customers to see exactly what’s going on with their process. They can catch it going wrong and even control it to prevent certain problems.” SMT