Stick welding is the oldest and most common welding procedure, and it will be with us for a long time

Shielded metal arc welding (SMAW), or stick welding, is the first method of electric welding developed. Coated stick electrodes were introduced at the turn of the last century and welders from before WWI would recognize the procedure and most likely would be able to create good welds with today’s equipment. In light of relatively more modern methods, like MIG (GMAW–gas metal arc welding) and TIG (GTAW –gas tungsten arc welding) how is it that stick welding is still the most prevalent welding method in the world after more than over 100 years since it was introduced?

Although stick welding has a worldwide presence, “if you look at just domestic business, it’s not as prevalent,” says Bruce Morrett, marketing manager, solid wire and stick electrodes for Hobart Filler Metals. “It is one of the better processes for different market segments such as steel erection or construction applications. But in shop fabrication it’s not a dominant process.” 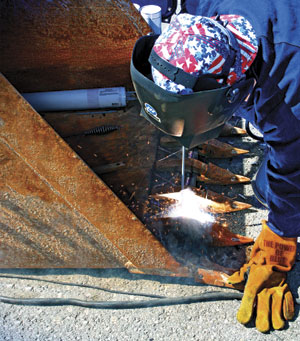 Because of its versatility, simplicity and ease of use, it remains a standard welding procedure.

“It is particularly dominant in the maintenance and repair industry, and is heavily used in the construction of steel structures and in industrial fabrication,” says Terry Boucher, CWB Group central region supervisor. “In recent years, its use has declined as FCAW (flux-cored arc welding) has expanded in the construction industry and GMAW has become more popular in industrial environments. However, because of the low equipment cost and wide applicability, the process will likely remain popular.”

Outwardly, the process has not changed much– there is a power source, a ground connector attached to the work piece, the stick holder with the welding electrode carrying the electricity to the arc that is formed between the stick, and the workpiece.

“Coated electrodes were basically developed in 1904 by Oscar Kjellberg of ESAB,” says Dwight Myers, a product business manager for ESAB. “We found out during WWII when we built all the Victory ships that the cracking was caused because of hydrogen, so in the Fifties we went from cellulosic and root shield-based sticks to low hydrogen shields to eliminate cracking. Further into the 1990s, we wanted to have the electrode to be exposed to the environment for a longer period of time without re-baking them and we’ve introduced moisture resistant products. Now we’re not only looking at lower moisture resistance, but we’re looking at a gentler arc time that the operator can manage better. We are seeing low arcs and low hydrogen basic electrodes with a lot better control, and not as harsh as some of the older arcs were.”

The stick electrodes have changed greatly but so have the machines.

“From the machine side there has been a lot of development such as for MIG when your electrode shorts. Stuck stick errors will turn the power off if the machine recognizes the stick shorted,” says Erik Brown, a welding engineer at Miller Electric. “There’s a lot that we do in the background with the software as technologies come along. But the basic principles of stick welding are still the same. It’s just things we add to it.”

Inverter technology has helped integrate many new features into the stick welding power sources. “We can do those special features with an inverter because we can turn the inverter off a lot faster than you could shut a transformer down,” he says. “The technology that started from when I was welding with the motor generator to today’s inverted power sources is like night and day in terms of the ability to weld with a stick electrode. It’s a lot easier today for someone to learn how to weld with stick than it might have been in the 1930s or 1940s,” says Morrett.

What hasn’t changed much is the chemical composition of electrodes, or the specifications that AWS created back in the 1920s. 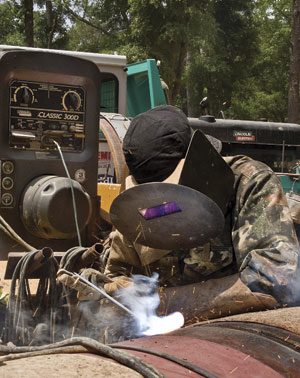 One of the greatest benefits of stick welding is the simplicity.

“Regardless of efforts to make FCAW more portable, it still does not match the portability and simplicity of SMAW,” says Boucher. The only drawback is that “a welder cannot achieve the high travel speed and deposit rates as you will typically achieve with the FCAW/MCAW/GMAW processes.”

With stick welding you don’t need gases or regulators to create great welds. “It’s a lot less expensive to get started in. It’s very good for outdoor welding because the shielding gas is on the electrode,” says Myers.

The only moving part on a stick welder is the cooling fan. “There are some exotics that you could probably weld with the TIG process that you can’t do with stick, but it’s just another way of joining material together,” says Morrett.

“Stick welding gives you a great deal of flexibility as well, adds Brown. “Say you work in a job shop and a job comes in and you need to run a nickel rod on it,” says Brown. “You can buy a smaller batch of nickel rod for stick electrodes that will be cheaper than going to buy the smallest spool of MIG wire that you could buy.” SMT