The process of choosing a stainless filler metal involves matching it to the base materials, selecting a shielding gas and often calculating ferrite content and total heat input. The best choice might not be apparent, especially for those not familiar with the metallurgical nuances. For example, joining 304L to 316L (a common application) presents several filler metal options:

You also have to understand service conditions (corrosive environment, temperature and required mechanical properties). For example, in nitric acid, a 310L filler (which has no Molybdenum) will perform better than a 316L or 310LMo due to selective attack of Mo.

A modified 307 filler, with 8% Ni and 7% Mn, might be a lower cost alternative because manganese costs less and acts as an austenitizing agent to create a suitable crack resistant microstructure in the weld metal.

Shielding Gas
Fabricators often try to use the same shielding gas as they do for MIG or flux-cored welding carbon steel. It won’t work with stainless because shielding gases with a carbon dioxide content of 5% or more add too much carbon to the weld metal, degrading its corrosion resistance. 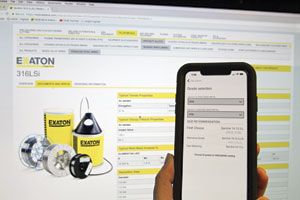 Ferrite Calculation
Welding standard austenitic stainless steels requires keeping the ferrite level high enough so it resists cracking but is low enough to prevent transforming to a brittle phase or possible selective attack. To determine balance between the austenite and ferrite forming elements in iron, engineers use one of three constitution diagrams: Schaeffler (the original), DeLong or WRC-1992 (now preferred).

Heat Input
To preserve metallurgical properties, some applications require calculating heat input, which may be a maximum, minimum, or both. For example, with a 2205 duplex alloy, welding below the minimum heat input can result in the wrong phase balance after welding, while excess heat can also affect the corrosion resistance or embrittle the metal.

New stainless filler metal options are being developed to meet changing metallurgies, more extreme service conditions and cost constraints. As a result, even experienced fabricators can benefit by consulting a filler metal expert and leveraging resources such as filler metal data books and online applications. SMT

Frank Babish is an application specialist for Exaton, an ESAB brand.