In June, the CWB Welding Foundation, CWB Group and the International Brotherhood of Boilermakers (IBB) announced that they had received a significant grant of $6.6 million for a training program focused on apprenticeships and Red Seal certification for pressure welders in Canada.

The grant is a five-year contract that was awarded by the Union Training and Innovation Program (UTIP) through Employment and Social Development Canada (ESDC) to help support CWB and IBB’s Filling the Gap: Pressure Welder Skill Advancement Program.

“IBB and CWB are the lead partners, but we also have a number of other organizations that we’re working with such as the B.C. Center for Women in the Trades, the Aboriginal Community Career Employment Services Society and Helmets to Hardhats Canada, an organization that helps veterans find employment,” says Doug Luciani, president and CEO of CWB. “Indigenous people and women are areas that our foundation focuses a lot on and trying to get more underrepresented individuals into the welding industry.”

It is well known that there is a substantial lack of skilled trades workers across the country in general. It was a concern pre-pandemic, and although business activity level certainly dipped over the past 18 months, finding skilled workers has remained as a major challenge for all industries.

“What we do know is that right now in the skilled trades in general, we believe that there are about 700,000 people set to retire by 2028. But because of COVID we’re seeing people retiring early. And I think that number is now understated going forward,” says Luciani. “I think that it has also been difficult for people to see the welding industry as a viable means, but that number shows that there’s definitely a need. And some companies are having to turn work away because they don’t have the skilled people they need.”

While education has always been governed provincially and required qualifications also vary in different jurisdictions, the Filling the Gap program streamlines the process while meeting provincial requirements.

CWB is managing the online theory training, which will be accessible to those even in the most remote areas, and the Boilermakers will be running the practical hands-on training at the 15 state-of-the-art facilities it has across Canada.

“Theory training or the material that you would use varies quite dramatically in programs across the country. And depending on where you are it might be paper based material,” says Luciani. “Our program is federal and allows people to be trained remotely, which breaks down those barriers of accessibility. And our theory training includes a lot of 3D modeling, augmented reality and simulation. Not only are we going to be able to make sure we’re training people properly, but the material is really cutting edge.”

“We have voice over video and 3D simulation where you’re actually able to rotate the part in a 3D environment as you would in a real environment to support our educational content. This enhances the students’ overall learning experience before they even set foot in a classroom or welding shop,”
adds Luciani.

j’Amey Bevan, director of the Boilermakers National Training Trust Fund, has been working with CWB from the start of the application development to engage those with the boots on the ground. 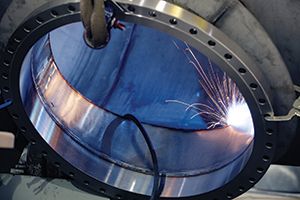 “I collaborated with our local training centres across the country to address their needs and help guide what competencies we felt this training could deliver,” says Bevan. “For individuals in the program, because this is very much a hand skill, we’re going to ensure that our expert Boilermaker instructors are spending time with the individuals to learn these skills and get the support and time they need welding to achieve these competencies. And we will be working with CWB on supportive content that will help guide the instructors so they know what’s expected and needed when doing these challenging welding tests.”

While this program is focused on pressure welders, people in Canada and abroad are already using the content developed by the CWB, which is constantly being added to. The CWB Foundation was started 10 years ago to address the skills gap and labour shortages. It runs camps for young people to introduce them to welding. It takes welding simulation systems to high schools and even offers its program to high schools for free and trains the instructors on how to use it. Luciani says that 85 per cent of high schools in Canada are using CWB’s content.

As the funding for Filling the Gap was just announced in June, CWB is in the process of ramping up the program and has hired a program manager to oversee it.

IBB is developing its training program for Filling The Gap. “One of the additional benefits is not only to have Canadians get skills they need, but to facilitate mentorship and support new welders in the future. And for Boilermaker members looking to upskill, this is an opportunity for those that have a solid foundation in welding to get their pressure welding credentials.”

Once the program is ready to launch, Luciani and Bevan said information and links would be available on their websites and through the associations they are working with. SMT