Put A Laser On That Robot

Since it was developed, arc welding has become the preeminent application for manufacturing in metal and has evolved at a breathtaking rate. If you are content with your existing welding systems and have not thought about putting laser welders on your shop floor, then you have not been paying attention to this welding process.

“What’s happened is that fiber lasers have come in and in the last ten years this has brought the price of lasers down by about a factor of six,” says Chris Pilcher, regional sales manager–Canada for IPG Photonics Corp. “You’re finding lasers in applications you wouldn’t have seen ten years ago.”

The upshot is that a robotic laser welder is not much more complicated than a robotic MIG system–the power supply is different, but the programming is virtually the same. The power supply can be solid state, disk, fiber or direct diode.

“You’re using a flexible cable to deliver the fiber laser beam. You put the optic end to the end of a robot and now you have greater feed on the movement, so you can get all around the part,” says Brett Thompson, sales engineer with the TruLaser Product Group at TRUMPF. “You can get underneath the part. You can get inside that part. So, it’s more flexible.” 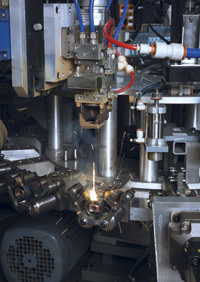 There are many reasons why a manufacturer would consider upgrading to laser welding from traditional welding procedures, says Kyle Smith, laser application engineer for Lincoln Electric.

“Higher travel speeds, lower heat input, higher accuracy, fine control of heat, the ability to weld very thick or very thin materials, the ability to weld on magnetic steel, as well as making it easer to weld exotic materials and dissimilar materials. The process allows welders to get into tighter areas and the ability to make hundreds of welds per minute. The path shape is not defined by electrode shape. The capabilities are endless.”

The automotive manufacturing sector is a big user of  the technology. “Spot welding is a small percentage of laser capabilities,” he adds. “An average car built in the last 10 years will have upwards of 30 meters of laser weld in them.” 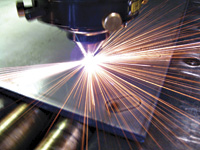 Quality welds
Although laser welders can perform most types of welds, that is not their strength. “Spot welding is not what a fiber laser is made to do,” says Dan Belz, FLW product manager for Amada America. “What you want it to do is to weld your high dollar cost parts. You get such a clean weld that you are not grinding off and you are not post processing. You’re wiping it down. You’re cleaning it up.

You’re processing it and sending it on to the next process. It is used in medical and food processing, applications that require good hermetical seals and where they want to minimize the post processing.”

Clean welds reduce the amount of work required to make the part look and perform to spec. This is critical when dealing with thin materials in critical industries like, medical and food service.

“We also find a lot of interest in companies that are welding materials in industries we wouldn’t have guessed a couple of years ago,” says Thompson, adding that laser welding is growing in other industries such as agriculture, food service and office furniture.

The automotive industry is the greatest adopter of laser welding because of the speed and quality of the welds, but any industry with appreciable volume–medical, dental and drilling is a good candidate for laser welding. 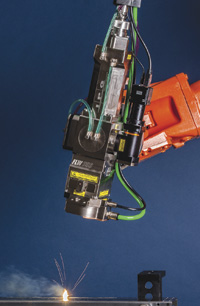 Pilcher attributes part of the growth of laser welding applications to improvements in designs. “Laser welders over the last ten years have gone from two per cent efficiency to 40 per cent. So you’re not carrying huge systems into the field anymore; the units are quite small and efficient.”

While increasing the travel speed of most welders might result in defective welds, lasers are quick right out of the box.

“It really comes down to speed,” says Tom Graham, key accounts group manager at Abicor Binzel. “A laser will provide much higher travel speed than MIG welding typically. But when you talk about laser welding, you are talking about autogenous welding, meaning no filler wire or do you require filler wire.”

Stability of the welded joint is better when fused by laser welding as the heat input is more focused in the joint weld, resulting in a much smaller heat affected zone leading to less compromise of the base metals structure. “You have distinct speed advantages and you’ve got no thermal distortion. Your parts can additionally be very close together and when you’re welding them together, they won’t move,” says Pilcher. “Whereas with MIG welding, things bend and warp.”

Laser welding’s ability to perform autogenous welding, welding without using filler material (though in some cases filler material is necessary), is what appeals to many. “There are several wire-fed laser processes–cold wire, hotwire and hybrid laser welding,” says Smith, that use filler material, and hybrid laser shielding gas due to the fact you are running an arc along with the laser. Whereas with autogenous welding, shielding gas isn’t required, but if used, it can improve weld stability and surface appearance. 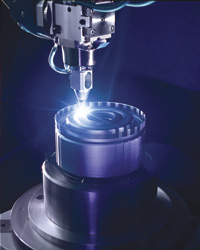 The downside of using filler material in laser welding is that it cuts the speed of the welding thereby negating one of the advantages.

“Another downside of using wire of course is that it’s a consumable item,” says Thompson, “and you also have to melt the wire so the energy’s not only being used to fuse the materials, but to melt the filler, so you have slower bubbling speeds, you have higher energy input to the parts.”

Cost
While the cost of a laser welding cell is expensive, prices hve been falling.

“A standard MIG welding cell will run you from $200,000 to $300,000, or even $400,000, depending on tooling, which is an important part of the cost,” says Graham. “A typical laser cell will start at half a million dollars. To get into a welding cell for a laser, you need to have a fully life size enclosure, a laser generator, a chiller, optics cooling, you might be at half a million dollars for something that’s similar. So probably two to two and a half times more for this is a rule of thumb, but it really depends on what you are trying to do and how complex the tooling is.”

Like any process, manufacturers need to assess costs versus benefits before deciding to invest in laser welding technology. If the process is right for your shop, advances in the technology could potentially be a competitive strategy and help you grow your business. SMT