Welding automation opens the door to the next generation of workers

What if you were given a hammer that could do exactly what you want without ever needing to physically wield it? That is how many manufacturers of automated robotic welding solutions describe this technology. It’s merely another tool in the welder’s toolbox.

Robotic welding for tube and pipe has yet to be widely adopted, but it’s about to gain a fairly sturdy foothold.

Many shops today are faced with an aging team of skilled welders and a lack of a new generation entering the workforce. And then add the need for repeatability and quality welds with faster cycle times. For these reasons, robotic welding solution providers have focused on producing automated and semi-automated systems that are easily integrated with intuitive, user-friendly interfaces.

Xavier Jauregui, vice president of engineering for ARC machines, an ESAB company, explains that automated welding technology started out as more of a research and development project for space programs. “When it started and the way the systems worked, they had that engineering feel. It was more than a welder’s product. That was one of the biggest problems the technology had in terms of adoption because you had a welder who hadn’t had a lot of high level programming education. Then you would put him in front of a machine that’s highly complex and try to get him to program and interface with it. That was the challenge.”

Along with ARC starting a strategy to reach out to the common welder, many of the application engineers that designed what’s now offered in its product portfolio are welders.

While the complexity of robotics has kept many shops on the fence, the fear of automation replacing skilled workers is also a concern. “There was some resistance from the workforce because they thought it was replacing their job, but it’s the opposite. We need a welder to control the process and the experience of the welder to make sure the machine is performing the process and it’s being done right,” says Jauregui.

Welders Wanted
Indeed, semi-automated robotic welding solutions on the market today are designed to merely take the torch out of the welder’s hand.

“We still have plenty of skilled welders, but those skills are diminishing,” says Bill Hall, key account manager for Abicor Binzel responsible for Novarc SWR, Spinarc, Oil and Gas market. “As you get older, the ability to handle the physical part of it and the vision required begins to diminish.”

Lincoln Electric’s application engineer, Kevin Beardsley agrees. “In general, automation takes human variables out of the equation. Taking the gun out of a welder’s hand can help make the same weld every time with consistent quality.”

Lincoln Electric’s Mini Pantheon mechanized pipe welding systems are semi-automated, easily implemented and designed for a welder to control it.

“You can never take away the fact that you need a welder reading the puddle and understanding what to do as you’re welding. You can’t replace that. All you’re doing is giving them the controls they’re used to as a welder to make a good weld.”

“There is equipment on the market that’s pretty expensive, but once the operator starts the program, they have no control over it as it goes through its preset modes. If there’s an imperfection in the fit up, high/low or track welds, the automated robotic system doesn’t allow for changes on the fly. As a result, fully robotic welding of pipe has not been as widespread,” says Hall.

“That’s where the collaborative technology comes in. The operator gets to stand beside the robot while it works. He can bring the arm to the pipe joint and start the process, while monitoring it with a pendant control in his hand or on the weld monitor in real time. The operator can make adjustments to the parameters within the WPS of weld, the distance or speed as needed.” 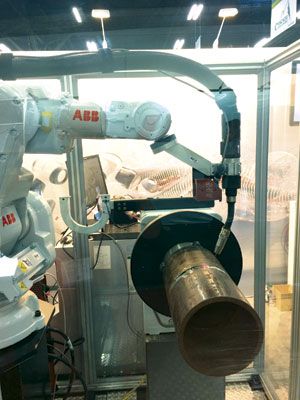 The automation is, in fact, only as smart or skilled as the operator. “I like to say that you can teach a welder how to program a robot easier than trying to teach a programmer how to weld,” says Eric McKellar, robotic welding application specialist for ABB. “If that welder or operator already knows how he or she would do it, it’s better for figuring out what technologies need to be applied.”

Human and the machine
Like all automation solutions, programming and setting specific parameters can all be done virtually and offline. Those recipes or schedules can be added to the welder’s library on the welding cell. And as most companies tend to evolve around the sizes of pipe or tube they usually work with, there will already be a range of parameters that are well known.

“With the SWR we have a simple and safe robotic solution that gives high quality repeatable welds from root to cap on multiple sizes and schedules of pipe.  Changing pipe sizes and parameters is as easy as choosing your pipe diameter, schedule and number of passes, positioning your torch,” says Hall. “Productivity increases of 30 per cent and more are easily attained within days of installation. All the welding is visible in real time on a monitor and all data is recorded for every weld for quality control and accountability.”

Programming parts in a virtual world gives the operator a good starting point and avoids the need for real-time changes on the shop floor.

“Once you’re in the real world you are going to have some deviation from part to part, especially with pipe and tube,” says McKellar. “Generally, it’s going to be the same size, but the position might be different depending on the fixturing. If you have a preprogrammed path, you can offset that path by simply touch sensing a few features on that part and locally shifting the arc weld path.”

Semi-automated systems can also address any limitations robotic welding might have. While this technology is able to perform all welds from the root pass to the fill passes, consistency in those welds may vary.

“In pipe welding, or any welding really, the most important pass is the root,” says Beardsley. “You bring two pipes together, leave a small gap and now you have to weld from the outside, penetrate in and get a good root pass. We sell the Mini Pantheon with a two headed welding system. The welder can hold one gun and do the root pass, then hang it up and bring the second gun (on the Mini Pantheon boom) down to the joint for the fill passes.”

“If you ask a welder to hold that gun in their hands for 18 minutes, they’re looking at that arc for a long time and getting tired. By letting the Mini Pantheon hold the gun for the fill passes, the welder stays refreshed and ready to do another high quality root pass,” adds Beardsley. 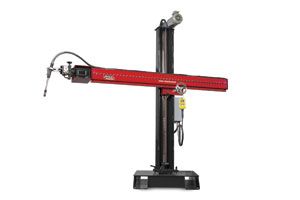 Sensory features and data monitoring can also help shops improve quality and processes, according to Jauregui. When you select a weld schedule and start the process, the system will provide you with all of the tools to monitor the weld. “One of the tools we will be releasing with ESAB is a weld cloud that will allow users to keep their records on the cloud or on a local network. It’s a tool that will perform analytic processes… not just checking how many welds they’ve performed, but checking performance.”

Such data can also aid users in flagging parameter issues or product defects. McKellar says that if you have some sort of spike because of burn through, or if there’s a gas shortage or the purge inside the pipe was lost, the process can be stopped and fixed right away.

Today’s systems, as mentioned, have been specifically designed for the user with intuitive graphical interfaces, that not only a seasoned welder can easily navigate, but also the next generation of workers. And from a health and safety standpoint, semi-automated welding can be far more ergonomic—reducing a welder’s time in the welding position and providing close proximity to the arc.

All in a day’s work for pipe welding operations, productivity is about the numbers and those numbers are pretty simple—pipe inches, per day, per welder—according to Beardsley.

Of course, solutions for shops are all on an application-to-application basis. And these welding solution providers are fully aware of that and ready to assess what is needed to streamline production flow and achieve that return on investment.

“If I walk into a shop and they’re doing 40 pipe inches per day per welder and have welders standing over the pipes that are rotating with a welding gun in their hands, I’m going to say ‘let’s do some automation and get that gun out of their hand.’ And the first question a fab shop guy is going to ask is ‘what does that give me?’” says Beardsley.

“Well, if I can go from 20 minutes to make a weld, three welds per hour and reduce that cycle time to 12 minutes, I can get five welds per hour. Buying solutions that give them the ability to decrease those cycle times with consistent quality will improve their competitive advantage. And the range is this: you can often reduce your cycle time of making a weld anywhere from 20 to 40 per cent just by taking that gun out of the welder’s hand.”

Making the transition from a manual process to robotics or semi-automated systems is a brave leap and requires a dedication to learning a new way to perform the same quality welds. But once the initial shock of how to program and utilize the equipment passes, it’s an easy transition for skilled welders.

And with such a reduction in cycle times, the ROI is as clear as a shop’s pipe inches, per day, per welder calculation. SMT