Almost every industry is focused on smarter and more innovative technology solutions. The common goal has always been striving for quality, repeatability and increased efficiency, all elements that today’s welding solution providers are hyper focused on. Whether it’s improved power supplies and ergonomics or collaborative automation, full automation or mixing processes, the welding technology developers are constantly experimenting and evolving their solution offerings to aid their customers in achieving that common goal.

Force of Energy
For resistance welding, the capacitor discharge (CD) solution by T.J. Snow is designed for high precision projection, press-fit and ring projections. But the first thing that a customer should realize when considering using capacitor discharge is the energy savings, according to Jeff Morgan, an applications engineer for T.J. Snow, who says that he has been “fiddling” with resistance welding for 50 years.

“The capacitor takes less than a second to charge and the weld itself takes about eight milliseconds to discharge,” says Morgan. “The energy provided to most [resistance] machines have a shorted condition, a load on the line.  With CD all we’re doing is discharging. We have machines in the field that are using between 300,000 and 400,000 amps to produce a weld. Those machines run at less than 100 primary amps. An equivalent welding process might be pulling 800 primary amps. So it’s using eight times the amount of energy.” 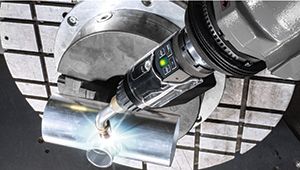 Morgan says that CD is a much more expensive capital expenditure compared to traditional AC or DC power supplies, but that the advantages are significant from an energy standpoint. “If you’re building a new facility, you could cut your capital expenditure for the power distribution by two thirds. Let’s say you’re going to marshal your projection welding process in one area of the plant. You won’t have to run a 4,000-amp bus for those machines; you can limit it to 400 amps.”

This technology shows the most benefits with exotic materials such as hot stamped materials and high strength, ultra high strength and advanced high strength steels. “We find that we get more reliable and consistent results for projection welding of fasteners in the automotive industry, for example, or just projection welding in general,” says Morgan. “And we get virtually no heat-affected zones. We can weld giant projections with 300,000 amps and it won’t be hot to the touch. It cools very rapidly. Sometimes we like to hit it with a second annealing pulse to strengthen the part, but that kind of post processing can be done right in the machine.”

Another advantage that Morgan points out is with ring projections. “There is no expulsion or very little, so there’s no cleanup after the weld, especially on threaded parts,” he says. “If you’re welding an M8 nut, you’ll have to tap the fastener out or you’ll have issues with expulsion in the threads. With this process the expelled metal, if any, is very cool so it doesn’t stick to the threads inside the fastener and comes out very easily.”

The CD system also allows the operator to input a charge value, which charges the capacitors to the appropriate amount of force required for the weld. With a conventional resistance weld process, the operator would have to set the squeeze time to ensure the electrodes are closed, the correct welding force is developed, and they’re not welding under rising force.

Not only is this capacitor technology fast and dialed in—the energy efficiency is unparalleled compared to traditional methods. “And since the energy is stored in the capacitor, it’s not drawing from a distribution system,” Morgan says. “When the weld takes place there is no chance of a voltage drop which can cause defective welds.” 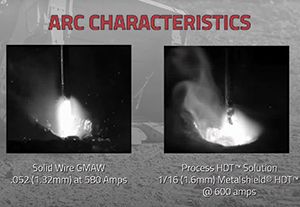 Using Lincoln Electric’s Power Wave S700 power source and a Process HDT Waveform, this technology was created as a complete solution for multi-pass GMAW-C welding applications, as it can eliminate the complexity of Tandem MIG while delivering single-wire deposition rates of up to 18 kilograms per hour.

In a press release, Troy Gurkin, Lincoln’s global industry segment director for heavy fabrication, said, “Fabricators continue to be challenged with producing more and improving quality without introducing added complexity into their welding operations. Process HDT provides a solution for that challenge, delivering the ultimate combination of automated high-deposition welding and ease of application all while driving productivity levels that exceed Tandem MIG at a fraction of the cost and complexity.”

In the Mix
Fronius is continuously researching and responding to welding challenges by developing new processes to improve efficiency. To cater to specific welding scenarios, the company is mixing processes with its Cold Metal Transfer (CMT) and Pulse Multi Control (PMC) solutions. Whether it’s the CMT modified by a Pulse or PMC with a modified short circuit or modified short circuit, it’s all about controlling the heat input.

“Our mixed processes are typically a combination of two different types of transfer modes,” says Andrew Newman, senior welding application technologist, Fronius. “The most common ones are a pulse process with a short circuit or modified short circuit involved with it. And we have a few different variations of that. We have PMC Mix, PMC Mix Drive, PMC Ripple Drive, CMT Mix and CMT Cycle Step. These different variations are developed for different applications.”

The PMC Mix process switches between a pulse and a short circuit transfer arc process called Low Spatter Control (LSC), which is known for a steady arc. The PMC provides optimal droplet detachment during the pulse phase and the LSC stabilizes and supports the weld pool when welding out of position.

The base process of PMC Mix is intended for manual welding and semi-automated processes for doing vertical up welds on heavy steel fabrications. “With structural steel or something like that you would need a skilled welder to weld a weave and control the heat while doing a vertical up. Now that weld can be done with a straight up and down pass without having to do any weaving,” says Newman. “And with those parameter settings saved in a job, they can be called up any time you want to do that style of weld.” 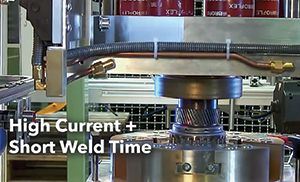 PMC Mix Drive offers more heat input control compared to Fronius’ SynchroPulse or PMC Mix. Its low power phase is generated with help from a push-pull welding torch, which reverses the wire electrode backwards after the short circuit and helps with droplet detachment.

“With the PMC Ripple Drive process it’s almost as though we’re turning off the arc. We’re pulsing and then basically cutting the arc for a split second to allow the puddle to cool down. We use this for applications such as bicycle manufacturing or any time we have to work with thin aluminum. We are trying to control the heat input and this process would typically replace manual TIG welding, but deliver the same quality and appearance,” says Newman. “Aluminum has a very low melting temperature, but it has a pretty high thermal conductivity, so you actually need to cool down that weld really fast. By turning off the arc, you’re basically freezing up the weld and then hitting it again with another hot set of pulses to raise the ripple weld.”

This process gives the operator greater control over heat input and droplet size. And Newman says, “If welding manually, a rough travel speed might be five inches per minute. The PMC Ripple Drive is five times faster and can more than double the output speed. If you’re able to automate it, you can replicate your process more and you don’t necessarily need a skilled TIG welder taking on that process.” 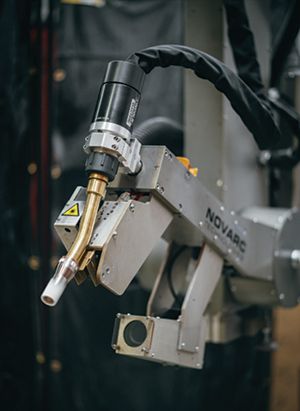 Essentially, the SWR+HyperFill option expands the capabilities of the company’s collaborative spool welding robot, designed to collaborate with operators to automate the pipe welding process.

“We saw a unique opportunity. HyperFill had very promising deposition rates and weld quality metrics that could lend themselves well to the pipe fabrication world,” says Novarc CEO Soroush Karimzadeh.

The system uses Lincoln’s STT GMAW process on the root, and twin wire (HyperFill) on fill and cap passes, and it can be used on carbon steel pressure pipes or vessels with 0.5” – 2” thickness and as low as 6” in diameter. The system also has the flexibility of using root to cap GMAW or seamlessly switching to FCAW or MCAW for the fill and cap passes.

Customer input has been very positive. “We wouldn’t have been able to make the lead time on the current project we are doing without the SWR—we would have probably had to outsource some of the pipe fabrication,” says Paul Hebson, vice president and general manager at Vancouver Drydock.

There’s a safety payoff too, as cobots are designed to use a light touch and are programmed to back off instantly when any potential conflict with the human operator is detected. “We were shocked to see that there was a three times increase in productivity using the SWR. But we’re also very pleased at the high level of safety it provides to our workers,” says Peter Tuck, regional vice president, Black & McDonald.

Of course smarter solutions are easing the challenge of finding skilled workers, but for today’s already highly skilled welders such technology advancements are reducing the physical extremes that some difficult welds require. And whether it’s vertical up welds, high-deposition welding, energy efficient discharging technology, or any kind of difficult manual process, it’s clear that welding solution providers are fiercely fixated on providing solutions to aid in achieving the goal of quality, repeatability and efficiency in the welding world. SMT