Tyler Magri, Trevor Fandrick and Tommy St-Martin have one thing in common: they’ll all be representing Canada in CNC machining and welding at the WorldSkills Competition in August in Sao Paolo, Brazil. Magri, recently attended a media event at Sandvik Coromant, a sponsor of Skills Canada. He’s enrolled in a two-year co-op program at Georgian College in Barrie, ON, and is preparing for the competition with practice work in class and at the machine shop where he works as part of is co-op program, Palcam Technologies in Newmarket, ON. 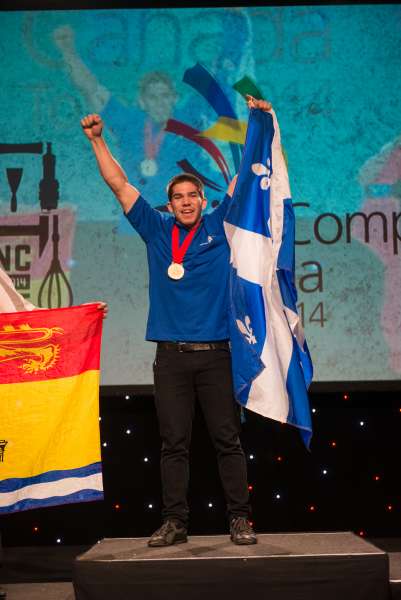 “I’m a little nervous, but excited. I see it as a learning experience. I graduate in April and Palcam said it will take me on full time. When I was competing at the National competition in June, the owner of Palcam hadn’t heard about the Skills Canada Competition and was really impressed with the number of young people. After being at that competition, I don’t know why more businesses don’t come out to it and hire people.”

Fandrick is in his third year of a four-year apprenticeship program at the Northern Alberta Institute of Technology (NAIT) and works at MARL Technologies, a machine shop in Edmonton, AB.

“I’ve gone to the provincials [Skills Canada Alberta] five times and to the nationals four times, but this is the first time for me in the World Skills competition and I’m very excited,” says Fandrick. I’ve been getting more time on the machine to practice and my employer is very supportive too and willing to do what it takes to help out by giving me time off to practice and by providing funding.”

Tommy St-Martin is a student enrolled in Centre Multiservice des Samares, a vocational training school in Joliette, QC. In a September, 2014 online article on www.laction.com, he says he took a welding course on a whim after completing high school and discovered he enjoyed it. He said he was ready to face the challenge of competing at the World Skills competition and was committed to training intensively for the months leading up to the event.