From science fiction to the floor of your shop

As automated welding enters the realm of the job shop, taking it to the next level of performance and reliability means one thing–laser welding.

Pretty much anything can be welded by lasers these days according to Dan Belz, fiber laser welding (FLW) product manager for Amada America. “I’m talking strictly fiber laser welding. Our system does have a short wave length and that enables us to weld a lot more material parts than your conventional CO2 lasers.”

Older CO2 systems had some challenges with reflective material, but suppliers have overcome the challenges. “With CO2 lasers, copper and aluminum are difficult because they are highly reflective and the CO2 wavelength does not couple well with those materials, says Ted Jorin, senior process engineer with Lincoln Electric. “Other lasers, solid state lasers, are often referred to as the one micron wavelength lasers because there are several in that range. These lasers do attack aluminum and copper much better. Aluminum welding is commonly done today with the short wave length lasers. Copper welding is still difficult.” 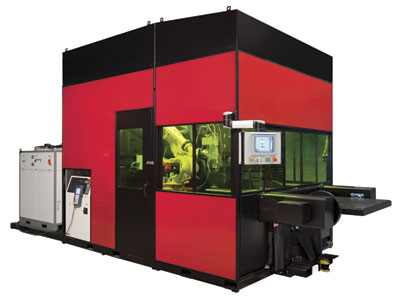 more prominent. “You’re creating a mechanical bond and we’ve developed procedures now where we can weld plastic to metal by texturizing the metal to create these little hooks, much like Velcro, then heat either the metal or plastic, causing it to melt around these hooks creating a mechanical bond,” says Tracey Ryba, product manager –Lasers at TRUMPF Inc. “You actually will break the plastic before you break the bond between the two. We’re doing that also with some dissimilar materials using some of our high peak power lasers where we can fuse aluminum into copper and it creates a mechanical bond between the two pieces of material.”

Just a few years ago, laser welding was limited to thin material, but that has changed significantly. “The thickness limitation comes down to how much power you have. So, a rule of thumb is about one millimeter per kilowatt. This is a rough scale,” says Erik Miller, business development manager-laser group for Miller Electric Mfg. Co. 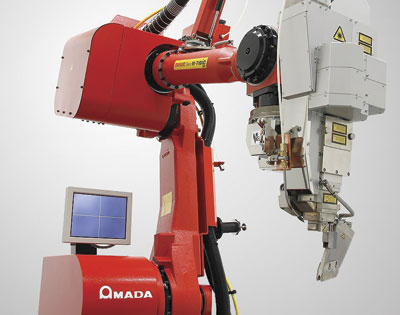 “You can go up to 10 to 12 mm thick plate but you’re going to need a 10 kW laser to weld that, plus, at that sort of thickness, you would need to introduce the filler material.” He says he has seen laser welding of two and three inch thick material using a 50 kW laser.

Filler or no
In general, there are two ways to laser weld: autogenously, not adding filler material, or a hybrid system that adds filler material like a GTAW welding process. With autogenous systems, the setup is critical. “If you are welding a joint that has a gap in your parts approaching a quarter of a millimeter, much of your energy is going to pass right through the joint without overheating the material. So, one of the limitations with autogenous welding is you should have as close to intimate part contact as possible,” explains Jorin.

When welding with wire or using a hybrid process, you could fill that gap by targeting the wire or material and fill the gaps and produce good welds, adds Jorin.

Another advantage of hybrid systems is welding together materials that don’t naturally weld well together. “Like a lot of aluminum and some of the steels that don’t have good carbon content, there is potential for cracking in the welds, which means it may not be laser weldable or even weldable in general,” says Ryba. “Depending on what mineral there is lacking, you can introduce additional wire into the material to balance out, to achieve a good quality weld. You see this typically in some of the aluminum.”

Key hole welding is typically done autogenously. “Where the energy density is high enough and the light hits the surface, the material vapourizes and the weld is made when two materials are stacked on top of each other and physically touching with no gaps to cover,” explains Miller “Then you key hole through one into the other one and that is typically done autogenously. As the material becomes thicker, it gets very difficult to make a key hole weld without excessive spatter or large amounts of laser power.” 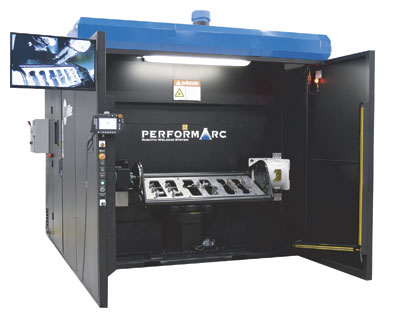 Hybrid welding has the advantage of being well suited to welding thicker materials, although a drawback is that it adds complexity to the system.

Some systems combine laser cutting and welding into one. “Wayne Trail, which is a Lincoln Electric company, for years has produced a product called the Flex Lase. And that machine would come complete with a laser light tight enclosure, a robot, work fixtures of some sort and we would put two different laser beam delivery heads, which we could switch between with the laser,” says Jorin. “One head would be for cutting and one head would be for welding.”

Investment
The price of lasers have fallen to the point where many welding shops can start to consider them in their business strategies. “I would argue nowadays that a laser is not a large investment,” states Ryba. “It’s a moderate investment. Laser prices have come down dramatically in the last five to ten years. If you look at a 4 kW laser say eight or ten years ago, which is a very common laser for laser welding, that laser would cost around $600,000 to $650,000. A 4 kW laser nowadays is around $150,000 to $180,000. So, that’s come down dramatically.”

Part of the price drop is the fact that these solid state lasers are simpler systems and no longer have the same moving parts or mirrors that focused the laser light. The new systems are simpler to install and maintain. “You can save on all the consumables,” says Ryba. “You basically change the water once a year. That’s your maintenance. You don’t have to worry about the electrodes and the tips and all those different things like you do in spot welders. With 1µm wavelength welding, you eliminate helium gases or shield gases so in all, you have a lot less consumable cost.

“So, the operating costs of the lasers are dramatically less now than they were eight or ten years ago,” explains Ryba.

A laser weld will always be a cleaner weld because the heat effected zone is so small. “With our fiber laser system, we can build and minimize or pretty much eliminate any post processing which is huge,” says Belz. “Our fiber laser welding system allows us to get that almost perfect cosmetic weld. So, it’s minimal on your post processing. In some cases, our customers are just polishing the welds. They’re not grinding anything.”

The main return on investment is the amount of production gain a company will realize.

“For example, we had an installation where we were welding fuel lines for a company and they came to us with the part drawings and an annual production volume that they had to match,” explains Miller. “We were looking at the project and this particular case the alternative was robotic keg welding. To hit the production numbers, they would have needed to buy three robotic cells. When you look at the cost of that, it’s not just the cost of the capital; to run those three cells they would need three operators. They would also need tooling for those three sets of cells. If you look at the cost comparison of one laser cell with one operator, one set of tooling could make as many parts as three cells, which would require three guys to run and three complete sets of tooling for the part. So, if the volume is high enough, laser can start making sense economically very quickly.” SMT