Laser welding offers many advantages, but is it the right technology for you?

If you haven’t considered it, you may want to take a second look. Increasingly, it is becoming the technology of choice among many manufacturers who weld because of developments in laser resonator technology and the growing use of laser welding for additive manufacturing.

The most important benefit laser welding offers over other traditional welding techniques is that it generates very little heat at the weld point, allowing users to weld as close as 0.005 mm (.002 in.) away from even complex intricate parts without any damage to heat sensitive components.

It also generates a “much smoother welding seam than MIG and TIG welding and saves steps in finishing of a product,” says Stefan Fickenshcer, product manager, TruLaser Product Group for TRUMPF Inc., Farmington, CT, a company that has been in the laser welding business more than 19 years.

“Laser welding is a fusion process so it doesn’t require filler material; it’s a much cleaner weld than other welding processes.” Indeed, the technology doesn’t require any consumables, has no electrodes, no gas cup or orifices, it’s a “fixed process-friendly” welding system, says Bob Tollett, director of marketing, Liburdi Group, Dundas, ON.

Lasers use the transfer of photons to ionize the atmosphere and create the heat essential to generate a molten pool, explains Tollett. “While this may sound the same as other arc welding techniques, the physics have interesting differences. Arc welding techniques rely on the electrons migrating from a cathode to an anode. The cathode and anode need to be connected to form a circuit. Electrons will always seek the path of least resistance. This may cause “arcing” to undesirable locations on the workpiece. The arc may “wander” to several spots around the target weld pool area if contamination is present on the surface. Arc welding couples to the surface where the path is clean and electrically sound.” 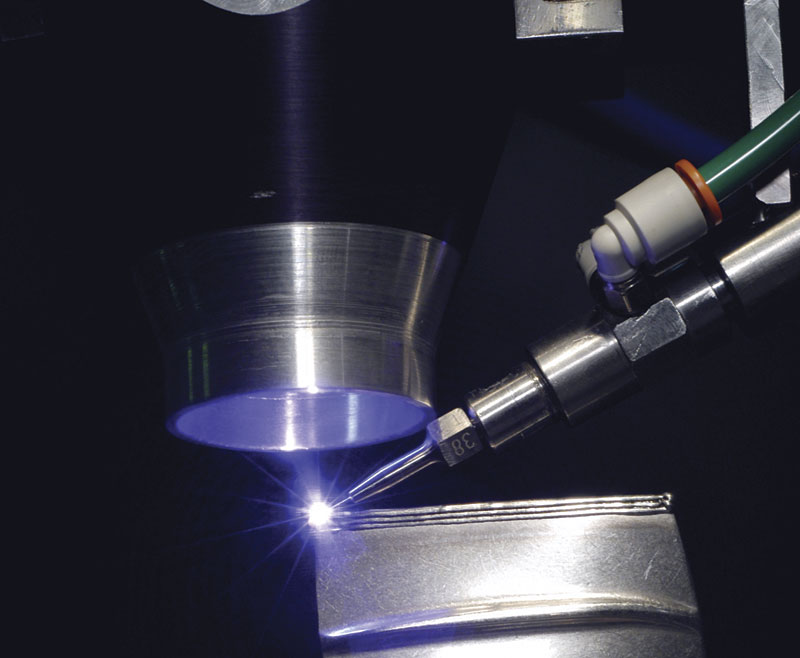 The laser doesn’t have these issues, says Tollett; it’s “a point and shoot ionization by photons. If you are welding a large plate “arc wander” or “arc blow” may not be an issue due to the large size of the weld area. If you are welding a medical implant or turbine engine bearing, arcing to a smooth working surface may scrap the parts, rendering the assembly useless.”

Lasers do have challenges in welding, he adds.

“The need for a precise joint geometry with no gaps or spacing is a challenge for many industrial applications. The high energy density of a beam can cut rather than weld on very thin edges. This is sometimes where a “softer” arc process becomes advantageous.”

The clean, smooth welds the technology offers makes it the welding process of choice for manufacturers whose products depend on aesthetic appeal, such as food and medical markets, adds Fickenscher.

A changing landscape
Laser technology has been used in industrial applications for decades, but in recent years, with the adoption of the technology growing in metal cutting fabrication processes and in additive manufacturing applications, it has evolved.

“Laser sources are becoming much more efficient. Optics today have much greater capabilities. With some laser systems, advanced optics allow you to use laser welding systems for cutting too,” says TRUMPF’s Fickenscher.

“Automotive is a big market for laser welding and many manufacturers in Europe and Asia are using it. It’s just starting in North America. But these laser welding systems are becoming more interesting for job shops too and at FABTECH we demonstrated a TruLaser 2030 fiber 2D laser cutting machine sharing its beam source as part of a laser network with a TruLaser Robot 5020 laser welding cell with an integrated robot. The laser network structure provides a new possibility for customers to enter laser welding with a much smaller initial investment because one laser resonator is used for both systems. The customer can optimize the use of the beam based on application demands.”

One of the most significant uses of laser welding in recent years has been in additive manufacturing.

“It will permeate into all of our lives within the next decade, from large, expensive manufacturing systems today to in-house free-form systems,” says Liburdi’s Tollett, who adds that Liburdi is heavily involved in research initiatives studying “free form geometries” using laser welding technology in additive manufacturing.

“We’re working with CRIAQ (Consortium for Research and Innovation in Aerospace in Quebec), which includes a network of companies involved in aerospace manufacturing that bring problems to the table to resolve technical issues, and laser additive manufacturing is one area we’re looking at. We’ve just hired a post doctorate student from McGill who is developing free form geometries and studying the mechanical properties to see how the technology can compete against mature, traditional manufacturing techniques.”

Up until recently, two types of lasers were used for welding operations: CO2 and solid state Nd:Yag lasers. Fiber lasers, however, which offer higher energy efficiencies of up to 35 per cent (and getting better according to suppliers), are now another option. One company that has employed the technology is Amada, which launched its FLW 4000 M3 fiber laser welder a few years ago.

The fiber engine on the 4 kW unit produces a laser beam with a wavelength approximately one tenth of that emitted by a conventional CO2 laser. The company says it results in Process Range Expansion (PRE) by ensuring precise results even when processing reflective materials such as brass and copper and combinations of dissimilar materials that were previously difficult to weld. SMT