The Problem: Training welders is costly and time consuming

I never wanted to learn welding. Then one day my boss Vern handed me a MIG gun. “Get ’em all fixed, or don’t come back,” he said, slamming the office door behind him. It seemed I hadn’t been paying attention to the stamping press, and several hundred of the corners I’d just notched in some pulley guards were decidedly too large. I spent the next three weeks fitting and welding the bits of scrap steel collected from the bottom of the press back into place, grinding the pulley guards smooth and then notching the corners all over again.

Reading the puddle
Vern taught me several hard lessons that summer, one of which was to respect the welding department. Stick, MIG, TIG—it’s all tough work, a skill that requires a keen eye, steady hand and plenty of practice. Granted, most welders don’t have to learn their trade as I did, but the road to welding mastery is still a long one, littered with endless pounds of welding coupons, filler material and wasted shielding gas.

Vocational schools and manufacturing companies have long borne the brunt of this expensive learning process, patiently guiding students through kilometers of test beads until welding competence is at last achieved. One of these is Miller Comprehensive High School, Regina, SK. Welding instructor Blair Bachelu trains over 300 high -school students each year, kids even younger than I was the day Vern slammed the door on me.

According to Bachelu, traditional welding instruction isn’t very effective. “It’s basically a lot of demonstration and handholding. In a class of 20 students operating out of six6 welding booths, it might take several days to get around to each one. You have to get them setup with initial adjustments, and then circle back to help fine-tune their technique as they go. It simply takes time.”

Aside from the lost time, Bachelu explains, there’s all the money wasted on consumables. With school funding always a top consideration, spending money on weld rod and steel to practice on is a tough sell. Fortunately, Bachelu has found a more cost -effective training tool, one the students take to like ducks to water: virtual reality. “I always ask the new class, ‘Do you guys have a gaming system at home?’ Of course they all do, so right off the bat I’ve captured their interest. That’s when I show them my $50,000 video game.”

Bachelu is talking about the VRTEX 360, a virtual reality (VR) welding system from Lincoln Electric Company, Cleveland, OH. Load up a program, don the VR-equipped welding helmet, grab the gun and students are ready to train in virtual construction sites, welding booths, even a make-believe desert base. “One look and they’re hooked,” Bachelu says. “They love using it.”

Not playing around
While the VRTEX 360 does bear some game-like features, this is no Saturday afternoon diversion. Bachelu explains that the system teaches welding skills in much the same manner as flight simulators teach airline pilots how to fly. “The benefits are obvious. It allows students to develop proper welding techniques in a controlled environment before having to deploy those skills in real life. They can ‘crash the plane’ so to speak, until they get it right.”

Bachelu has been so successful with his welding program he’s even offered it in the lunchroom— a health inspection shortly after the start of the school year uncovered an asbestos problem in his classroom. “I actually did the welding course in the cafeteria for three weeks strictly with the VRTEX. I couldn’t have done it otherwise.”

School lunches aside, the VRTEX 360 teaches proper gun position in the weld joint, contact tip to work distance, work angle, travel angle and travel speed. “These are the five fundamentals of welding,” says welding instructor Joe Johnson of Wallace Community College, Dothan, ALla., whose school has six of the training units and plans to buy more later this year.

“Before the VRTEX 360, we offered what everyone knows as traditional welding classes. We had theory, during which the students learned the five fundamentals from books and instruction. They would then move directly into the lab and begin welding.” This was expensive in both time and consumables, and three and a half years ago, the school began looking for a more cost-effective alternative. 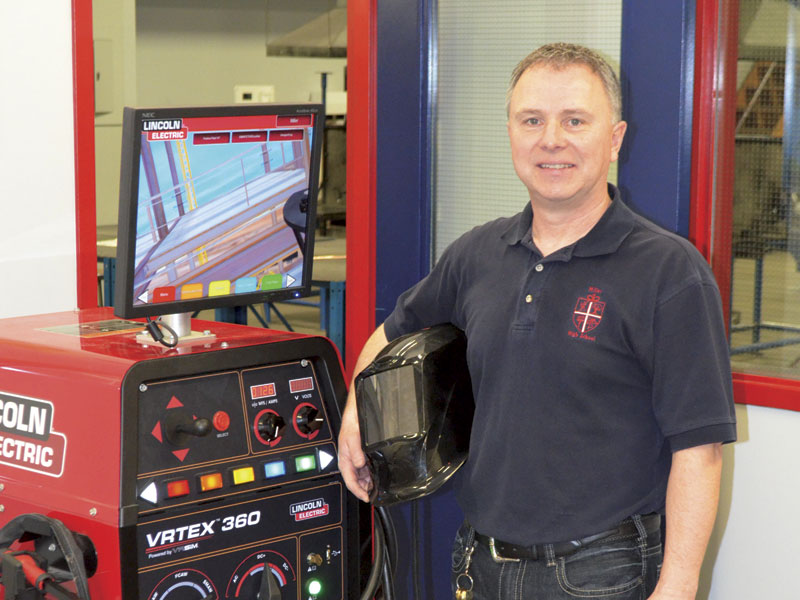 Today, Johnson’s students still attend welding theory. What’s changed is that the initial “hands on” learning afterwards is now done on VR simulators. “There’s definitely a cost benefit with this approach,” Johnson says. “More importantly, the simulators give the students substantially more welding time, allowing them to hone their skills virtually before moving out into the traditional lab.”

The result is a win-win for everyone—students gain better technique in a shorter time period, and the school saves money. It’s also good for the industry. Miller Comprehensive and Wallace Community College both point to strong class attendance figures as an indicator of high-paying welding jobs in oil and gas, nuclear and chemical plants, and fabricators across North America. “Enrollment is definitely up,” says William Sellers, associate dean-Career and Technical Education at Wallace. “Both of our campuses are running at maximum capacity, and we actually have waiting lists of students wanting to get into the welding program.”

Sellers thinks at least some of the popularity of the program is due to this new way of learning. “We’re dealing with a technically savvy generation of students. Many of them are just graduating from high school, and embrace the welding simulator because they grew up with gaming consoles. It allows us to attract students who in the past might have been a little skeptical about welding.”

Some of that skepticism stems from the viewpoint that welding is hot, dirty work. While that may be true in the post-graduation world, Sellers explains that schools can offer a considerable amount of training in a climate-controlled virtual environment. “We now have a machine that allows us to do incredible things, reaching out to a population of students that is excited about electronics and technology. It allows the school system to better introduce them to the reality of the world that they will work in later.”

Right on the money
Someone who knows that reality firsthand is Chris Gandee, Lincoln Electric virtual welding solutions sales and training specialist. Prior to joining Lincoln, Gandee served 22 years in the U.S. Army. His last job there was chief welding instructor at the Army’s welding school at Fort Lee, VAa., which now has 11 VRTEX 360 units onsite and another 6 at the maritime school in Fort Eustis.

Gandee has trained welders in the Marines, Navy, Air Force and Army alike, arguably giving him more experience with VR welding than anyone in the world. Despite his broad experience, however, he’ll tell you the armed services and civilian manufacturers both fight the same battle: cost reduction.

With no welding rod to melt, no gases to vent or steel to prep and then throw away, the VRTEX is clearly the winner in terms of savings. The question remains, though—how much money does VR really save when training new welders? Both of the schools interviewed for this article agreed the savings are “substantial.” If you need a more precise answer than that, ask the VRTEX.

“The simulator keeps track of all the material, consumables, gas and electricity used for each weld. You can plug these values into our online calculator and it gives you the amount you would have spent without the VRTEX.” Gandee points out that this is a conservative figure, since it does not consider all the other things required to operate a welding booth—grinding wheels, protective gear, wire brushes, building maintenance—the list goes on.

Everyone wants to save a buck,
but more important than cost is quality and student success. A 2010 study published by the University of Iowa claims that virtual reality students had overall certification levels 41 per cent% higher than those enrolled in comparable two-week “conventional” welding programs. “The best way to become a good welder is to practice,” Gandee says. “That what the VRTEX allows them to do—go through the motions of welding without actually wasting material.”

Virtual reality is catching on faster than the latest release of Super Mario Kart. Technical and high schools, community colleges, manufacturers, even correctional institutions are using this innovative tool to train the next generation of welders. Wallace’s Johnson sums it up like this. “It’s all about repetition. Obviously, the cost savings offered by VR is huge, but the bottom line is that students no longer have to spend time preparing metal—cutting it out, grinding, tacking pieces together before they can even strike the first arc. Virtual reality let’s them spend more time under the hood. For us, that’s what it takes to be a good welder.” SMT

INSIDE THE NUMBERS: How much do welders make in Canada?

Plasma vs. Oxy-Fuel: Which metal cutting option is right for you?

INSIDE THE NUMBERS: The most popular machinery investments for Canadian job shops