Flux Cored Arc Welding (FCAW) has been widely used for a number of years and is known for its high deposition rates and exceptional mechanical and chemical properties, perfect for structural steel, pipeline welding and other similar applications.

1. Gun Angles
A common problem is using the wrong welding gun angles in pipe welding for manual and automated. The gun angle should be straight (90°) on the pipe going from six to 12 o’clock positions to avoid welding slag build-up, mostly on the top of the pipe. Using a push angle gives you a better-looking weld profile, but welding slag inclusions are more likely, especially if you’re not speeding up the welding carriage on the top of the pipe. 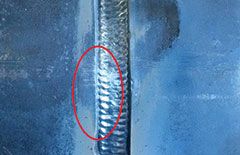 2. Wide Caps
If the fill pass is too wide and the wire is riding up too much on the side wall, the weld drops down on the edges because the support of the welding slag is lost.

3. Synchronizing Parameters
“Parameters for the carriage speed, weaving speed and weaving width should be synchronized to get a good weld. They are set independently and, for example, if the weaving speed is too low, it can result in a rough weld appearance and rework will be required before the next welding pass. This photo is an example of a good and bad weave, both of which are made in the three o’clock position.

4. Cap Passes
Trying to fill too much with the cap pass could result in undercut, bad overlap, and the weld could get sucked in.