Whether a job shop is looking to add welding to its lineup of services or upgrade its current offering, there are some key considerations to keep in mind when navigating the various options on the market today.

to Brian Hammers, product manager for Miller Electric’s industrial equipment division, the first thing shops need to look at is what they have in terms of power availability. If it’s single phase, do you have 208 or 220 amp? Or if you have three-phase, is it 208, 230, 460 or maybe 570 amp? “Shops need to understand that this can be a limiting factor for which machines they can operate in their shop. If they have single phase power only, they are limited in what material thickness they will be able to weld properly. If you’re working with heavy steel or aluminum, you’re going to need three-phase power. So input power is one of the first things that really needs to be understood.”

A close second to input power is the material type and thickness. “Usually there’s a rule of thumb of one amp per thousandth of inch of material that you are working with,” says Ian Johnson, brand ambassador for ESAB welding and cutting. “If you’re going to be working with a lot of 3/8-in. to half-inch plate, you’re going to need power sources in the 250 to 300 amp range. But if you’re working with thin materials, you may be able to get away with the 200 to 235 amp range.” 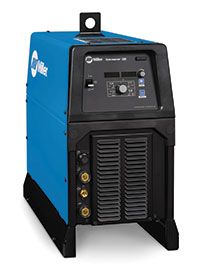 The process type is also important.

“There are power sources that can be dedicated to any of those processes, or useable for multi-process machines as well,” says Hammers. “When you have a dedicated machine for a particular process, we can add many features and controls to get that arc exactly how you want it. And multi-process machines are a great choice for those that want to achieve a great weld, but also have process versatility.”

For dedicated machines and processes, there have been many developments and features to help ease operation and power controls. For example, if you’re MIG welding heavy plate or thick material with high amperage, an accessory such as a cooler is needed. “You’re holding onto that MIG torch and running MIG wire through it non-stop. But the gun can become too hot to physically hold. If you think of TIG or Stick welding, those electrodes are only 12 inches long or shorter, so when you run out, you have to stop welding. But with MIG, it continues to feed thousands of pounds of electrode wire without ever having to let go of that trigger. So there’s accessories such as a water cooler that runs water through the torch to keep it cool,” says Hammers.

Miller is constantly developing arc improvements and one of its recent advancements has been a trigger sensor. “If you’re MIG welding and the weld is long with your wire, when you let off the trigger to stop, many times a molten electrode is left on the end of the wire. If you don’t cut that off before starting up again, you’ll get a big pop of molten splatter, which creates a crater at the beginning. This is something that people have just lived with and cut the end of the tip off before starting again. We’ve developed a way that the machine senses when you’ve let go of the trigger and sends a surge of energy to the end of the electrode to blow that metal ball off. It leaves you with a clean wire and a nice crisp start on the next weld.”

This technology debuted on Miller’s flagship Deltaweld series and is offered on other new machines as well.

When TIG welding, which requires the welder to use both hands, accessory options such as a trigger switch on the torch or a foot pedal allows operators to safely toggle the power on or off. “It’s about activating and extinguishing the arc,” says Hammers. “TIG is such an intricate process that takes a lot of training to be able to do well. You need to be able to vary that power level up and down, and turn it on and off while both hands are independently welding.”

Although it’s not a new advancement, the introduction of inverter technology has been a game changer for arc time and improved power efficiency. Hammers says that older transformer-based welding machines would use up to a quarter of a kilowatt-hour while sitting idle. But inverter power supplies reduce the energy draw to 8/100ths of a kilowatt-hour. Even while the machines are being used, today’s welding systems can be up to 93 per cent more efficient.

Johnson agrees. “The nice thing about inverter technology is that you can have a smaller frame of the welder and reach large power outputs at the same time. If we’re talking about TIG applications, especially with aluminum, you have an unlimited amount of hertz available while you’re working in that process. With one of our Rebel series welding machines you can get up to 400 hertz, which you couldn’t get on a traditional transformer machine. Plus, those transformers weighed 300 or 400 pounds and moving them around was impossible.” 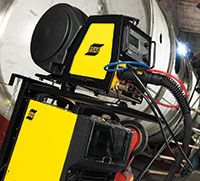 ’s Rebel series is geared toward small to medium sized job shops that require versatility for different processes. “There are many different options from 205 amp AC/DC machine to a 285 amp DC only machine. All of the machines in that family are also multi-process and dual voltage. So you can have MIG, TIG and Stick capabilities all in one,” says Johnson. “Job shops want to get the most out of the tools they buy. So if you’re buying a welder, it’s better to get one that handles many different welding processes. And another great aspect about the Rebel line up is the portability of the machines. The full frame machines such as the Rebel EMP 235 or 285 are a little heavier. But the Rebel EMP 205 and 215 weight in at around 50 pounds and are easily run off a generator on a job site if needed. It’s that kind of versatility that a lot of people want.”

Suppliers are also focused on ease of use for new welders coming into the industry and, of course, the lack of skilled welders in the labour pool. Miller has added easy set up features for those not well-versed in setting wire speeds or voltage. “In the industrial setting, they’re sometimes getting people in the door that don’t know how to weld,” says Hammers. “So we added a set of features that basically only require the operator to know the thickness of the material. They can simply turn a knob to the correct thickness and the machine is set up.”

For a system that has a separate power source and accessory, such as a wire feeder, that would both require proper set up before starting to weld, Miller has added the entire user interface to the feeder. “Point of control is a big trend. Having the power source and all of the controls at your feeder means adjustments can be made on one interface and it’s easy to see,” says Hammers.

Control displays are also getting bigger to accommodate more characters. “Old machines had three or four character options, so there was a lot of abbreviations being used that were hard to understand for new welders,” Hammers explains. “Now we have displays with 60 to 80 characters, we’ve made the symbols more intuitive, decreased the number of buttons and eliminated hidden menus,” he says, adding that those hidden menus caused problems if someone turned on a feature in a hidden menu, the next person on shift would have no way of knowing it was turned on. “With our new machines, you can literally just glance at the interface and see everything that’s turned on,” Hammer says.

With such a variety of options on the market today, shop’s need to not only look at their current power capabilities, material types and processes, but also what welding system will suit future needs. And with all of the advancements in controls and interface technology, the pressure of finding highly skilled welders is reduced. SMT