The Canadian Welding Group (CWB) is expanding its presence in Western Canada with a new 18,000 sq ft facility in Nisku, AB. The CWB held a ground breaking ceremony on November 12 with government dignitaries.

The new facility will enable CWB Group to continue to effectively service industry in Western Canada to further support public safety through its certification programs, educate the next generation of welding professionals while providing a national voice for its members.

“This new facility is a prime example of our continued growth and commitment in Western Canada,” said Doug Luciani, President and CEO of CWB Group. “As a national certification, training and membership body, we’re committed to ensuring we represent the entire country’s welding community and the construction of a new facility in Alberta further solidifies this goal.” 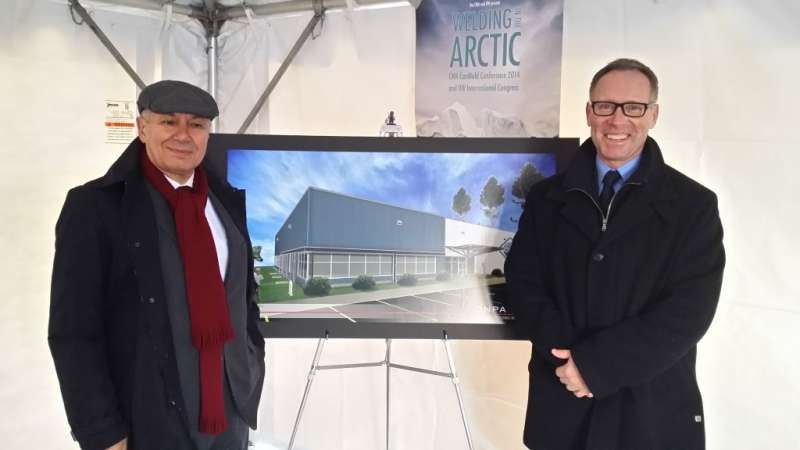 Past CWB Group Chairman Joe Doria (L) and CWB Group President and CEO Doug Luciani pose next to the architect’s rendering of the new CWB Group’s office in Nisku, AB.

Construction on the pre-engineered facility will commence in the fall with an anticipated completion date of summer 2014. CPI is the general contractor while the pre-engineered building will be manufactured in Western Canada by Behlen Industries, a company CWB certified to both CSA A660, CSA W47.1 and registered to ISO 9001 by QUASAR.

“Everything is running smoothly to date and we’re excited to step foot in our new, state-of-the-art building that will be our hub for the Western provinces,” he said.

“Since we began as an organization 1991, the CWB Group continues to grow where we now have over 200 employees,” he said. “And with the economic growth in Western Canada, we feel this is a prime opportunity to expand our existing presence by building a new facility that will eventually accommodate more staff as we continue to grow to meet the ever growing demands of the diverse industries that we serve that is continually changing and expanding.”