In today’s fabrication world, laser technology reigns supreme. Whether it’s cutting, bending or punching, these processes are astoundingly fast and efficient. And while many companies have invested in laser technology to increase throughput and process efficiencies, the sheer speed of laser technology has caused other bottlenecks downstream.

Laser welding technology is gaining traction in sheet metal fabrication and it’s becoming vital for additive manufacturing processes. But industry experts agree that when considering a laser welding process, it’s less about replacing one technology with another and more about changing your processes.

Power play
Systems on the market today can range from two kilowatt (kW) up to 10kW. These power ranges are geared towards process-specific needs and are based on material type, thickness and desired throughput speed. Shuang Liu, a laser welding engineer for Miller, says lasers aren’t about high power, but more about high energy and density. “Lasers don’t use unnecessary heat for penetration. You can have a very narrow weld, but you can weld very deep—half inch or one inch material can be welded with a laser in one pass,” he says.

Arc welding doesn’t have the same energy density. “You have to prepare the edge to make a groove and add filler metal pass by pass,” says Liu. “So with that you will have more filler metal, which is a cost and your time is a cost, and it slows down efficiency. With a laser you can travel faster and have smaller heat affected zones, which tend to degrade the weld quality, causing cracks and fractures.”

Masoud Harooni, TRUMPF’s laser welding product manager, says “when we look at arc welding, whatever heat we are transferring to the part is through the arc. But with laser welding, all of the heat transfer is through a tiny beam, which brings higher energy and density to the spot.” 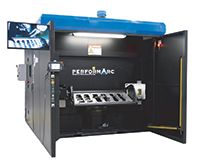 He says that when you apply less heat to the part, you will have less metallurgical issues. Heat is the source of fusion welding, but too much heat is problematic and causes more problems such as distortion, cracking and porosity. “By limiting the heat input with laser welding, we have a better chance of welding parts more efficiently.”

The speed of laser welding technology varies on the material thickness. Harooni says six kW lasers are considered high power in the welding process. “With a six kW, depending on the thickness, you can weld two metres per minute. If you have material that’s four millimetres thick, you can weld six metres per minute with a six kW,” Harooni says, adding that with lower thicknesses, the speed increases. But for a normal speed, the rule of thumb is that for every one kW, you can penetrate 1.5mm of steel.

In the sheet metal industry, Harooni says four kW laser welding cells are the standard. “Most of our customers are making doors, containers, electrical boxes, or food containers, for example. When we go over all of these application profiles, they’re not using half-inch thick materials. Why would they? For parts made out of one millimeter 20 gauge steel, we find that four kW is the sweet spot. Six kW is where things are a bit more on the heavier, structural side.”

Steve Massey, Miller’s arc research and advanced process engineer, agrees that thicker materials require more power. “For carbon steel, 10kW can weld about 10- to 12mm thick material at about 80-inches-per-minute travel speed with full penetration. It’s about energy density too, so you can control the spot size of the laser. If you make the spot smaller, there will be more energy per area and that can help with thicker materials.”

Mind the gap
Certainly, the speed of laser welding technology is impressive, but Liu, Massey and Harooni agree there are advantages and limitations for both traditional arc welding and laser welding. With arc welding, the material needs to be prepared ahead of time. And you don’t want that material to collide with the torch during the process, so welders typically have to move and rotate the part.

Laser welding is a non-contact process that has a long focal point, which works well with complex geometries. “And with laser welding, you don’t have to worry about cable connections. Arc is electrical and you have to form a closed circuit to make the current conduct through the arc,” says Liu. “But lasers have their limitations. You want to keep the energy density high. If your area gets smaller, your density gets higher. But if the spark gets smaller, you
will have less tolerance to the gap. And if the gap is out of an acceptable range you cannot weld it with a laser. Laser technology is pretty strict on the gap tolerance.”

For years, shops have been designing parts with larger gaps for a traditional welding process. Moving to a laser process doesn’t necessarily mean shops would have to change the design, but merely modify them to adhere to the laser’s gap tolerance levels.

For industries producing parts that can’t have visible welds, such as household and food industry appliances or automotive grill manufacturers, laser welding fits perfectly as there’s no post processing needed. Liu says the low heat input of the laser means there is less distortion. For those welding stainless steel for appliances, they want just the pure stainless finish on the outside. But if you weld it and there’s too much heat, the stainless steel will discolour and distort. “So on the production floor, they’ll spend a lot of time grinding and sanding it until it looks shiny and the weld is invisible,” she says.

Harooni adds that laser welding also benefits the automotive industry—which already uses the technology—to pivot into battery electric vehicle production, as they will need to react quickly to changing the body structure of vehicles. “There’s also a trend in transportation. The increase in online shopping due to the pandemic means there’s a need for more shipping and receiving,” he says. “I would say we will see it employed more in heavier industries and agricultural, for example.”

The next big consideration is the cost of investing in laser technology. With these cells, fixturing is required. But Harooni says “the cost of the fixturing should be included in the total investment of the machine. At the end of the day, shops need to consider what they’re spending right now and how much this investment would cost them. If they have the capacity and demand, parts that might take them 25 minutes now could be done in three minutes.

“We have a west coast customer that is making big fuel tanks. They have a demand of about 37,000 per year. They were spending 31 minutes per part with traditional welding, but now [with laser welding] they’re doing those parts in 3.5 minutes,” says Harooni. “If a customer came to me saying they wanted a laser welding system for 150 parts they need to produce in a year, I would say it might not be the right investment. The demand or potential demand should be there so they can fuel that need.”

Liu agrees. “If a company needs to produce 10,000 parts per year and they can only do 2,000 with traditional arc welding, the ROI of the laser welding system will come back much quicker.”

Massey adds, “another term that we also use is joint completion rate. There are a lot of variables that come into play with that. With laser processing, if you want to keep the energy density high, you’re probably going to have to have some good preparation on your parts. You may have to machine the edges that will be joined together, for example. With arc welding you’re also going to need some prep. So when you choose your process, you need to consider the productivity and total joint completion rate. The user will need to understand the trade-offs and how that impacts their cost structure.”

There are many considerations for shops looking to invest or justify such technology. The speed and efficiency of laser welding systems is appealing, not to mention the technique all but eliminates post processing and the need for consumables. While some might not currently have suitable demand, having faster cycle times may open the door for more business growth in the future.  SMT