For the past several years pipelines have been in the news. Industry wants to put pipelines in to move oil and gas from their extraction sites to the consumers and protesters generally want the pipelines to be safe and the environment respected.

While a chain is only as strong as the weakest link, a pipeline’s strength is defined by the quality of the welds. There can be no weld defects in any pipeline.

Pre-weld beveling and cleaning is crucial in pipeline welding as is fit-up. “You have to take time to actually fit the pipe,” says Brian Szenasi, the Alberta district manager for Lincoln Electric. “The pipe is never perfectly round, so quite often if you’re fitting one pipe to another pipe sometimes you have to rotate the pipe a little bit to try to get it so you minimize the highs and lows of the pipe. So, taking the time to try and ensure the best joint prep and setup as possible is the first thing.” 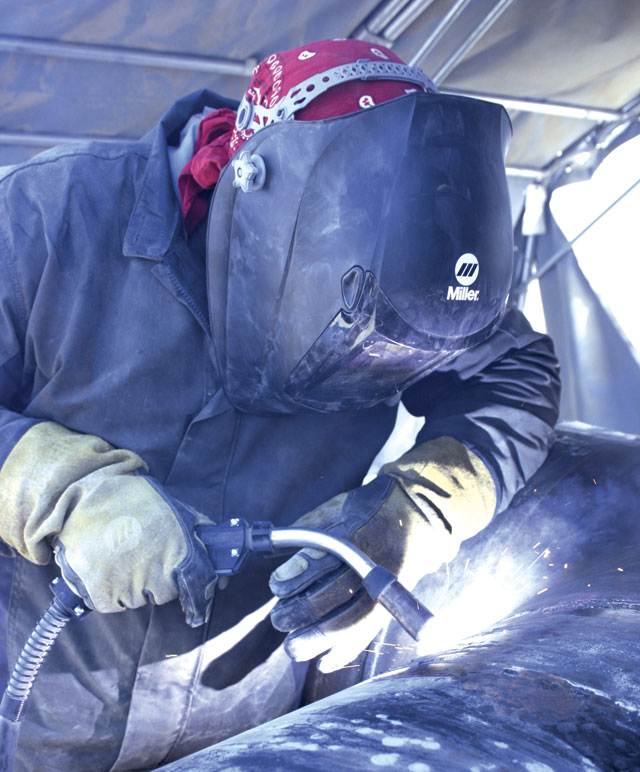 Pipes can still be within tolerance, either in wall thickness, size and roundness but can then not match up well end to end.

“If you get, for example on the diameter, the plus side on one pipe and minus side in the other pipe then they don’t align, but they’re both within tolerance and that’s one factor,” says Alex Palynchuk, founder of Western Instruments and original inventor and patent holder of the Corod System (Coiled Sucker Rod) used in the artificial lift of oil. “When they double the pipe, you get a bevel and then on toward the inside of the pipe there’s a flat area, so there’s a tolerance there that you get; plus in one pipe and minus on the other pipe. Then there’s a misalignment there and it makes it more difficult for the welder to make a good weld. That’s what I refer to as geometric misalignment.”

Besides this geometric misalignment with pipes, the material of the pipe itself must be of the highest quality. “Occasionally there are issues with the material, but generally with the pipe manufacturers, that’s not an issue these days,” says Ken Thorn, a global welding engineer who recently retired from the Canadian Welding Bureau (CWB) Group. “The material of the pipe is what it says it is and what you expect it to be and the welding consumables are in good shape as well. There has been in the past some question about pipe quality, but I think if you’re buying North American pipe or if you’re buying good quality pipe, that’s not an issue. Certainly, anybody doing natural gas and oil pipelining is conscious of that. I mean, leaks and failures are big news these days and everybody’s trying to avoid them.” 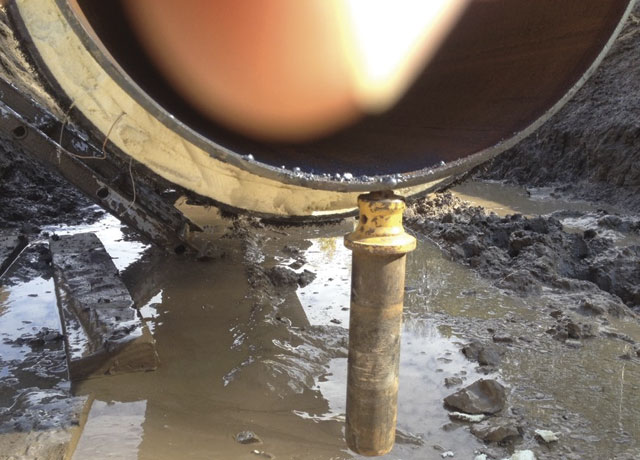 The magnetic property of metal is a concern when welding pipe. “It makes it even more difficult depending in part on the degree or level of residual magnetism,” says Palynchuk, “When that happens it affects the stability of the arc and the arc can wander and be deflected and the welder has a difficult time getting the electrode and the arcing action and you can make a good weld.” The effect when the electric arc strikes magnetized metal is called arc blow. “Instead of going straight down to where you want to deposit the metal, the arc wanders all over the place.”

The level of residual magnetism varies quite widely in different metals and pipes.

Demagnetizing pipe is the only way to prevent arc blow and weld faults. Similar to how ships in World War Two degaussed themselves to be protected from magnetic mines and magnetic torpedo heads, the systems use coils of wire to neutralize the magnetic effect.

“We put the coil just over the end of the pipe, both sides, six inches,” says Palynchuk. “You reduce the level of magnetization and reverse the polarity and then you do that and then you step down and you can get the residual magnetism down close to the earth’s magnetic field which in this area is about one half a gauss.”

The main reason to ensure proper welding of pipelines is to make sure the oil or gas does not leak into the environment. Fixing a bad weld is an expensive and time consuming process. 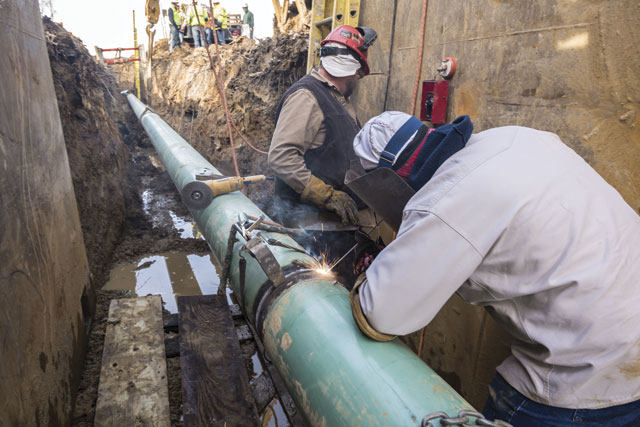 “Welding operators themselves don’t typically test for defects, except perhaps to grind the weld starts and stops and any minor defects,” explains Spindler. “Many fabrication shops have an NDT company test for weld defects, using either ultrasound or x-ray testing. One new technology is phased array advanced ultrasonic testing, which is a very fast, very accurate way to detect any type of defect in the weld material.”

The type of testing one does is dependent on what type of welding process is used.

Depending on the standard of the code involved in the job and depending on the fault, some faults you’re allowed to repair while for others will involve an expensive and time consuming cut out repair.

“It’s generally the standard for pipelines that don’t allow for repairs,” says Thorn. Where one is allowed to repair a faulty weld, “you cut it out typically with a grinder, adds Szenasi. “So, if you’re doing ultrasound or X-ray they’ll tell you that at two o’clock (on the pipe) you have a defect that is X size and they’ll tell you whether it’s a lack of fusion or whether it looks like it is a slag entrapment. So you know where on that pipe the defect is, you take a grinder and grind it out and re-weld it.” SMT