A labour of love

McColl Racing Enterprises builds on founder’s love of the sport

When you do something because you love doing it, things tend to work out pretty well. But when he started building racecar chassis 50 years ago in his garage, Burt McColl probably had no idea where his passion would lead.

It was just a hobby at first. It became a business 35 years ago. And today, McColl Racing Enterprises (MRE) is pretty much the only game around when it comes to building stock car chassis for the NASCAR series in Canada. The company’s 1,161 sq m (12,500 sq ft), seven-bay facility in London, ON, keeps all 13 employees busy. And Burt is still actively involved, as head of the company’s technical department.

President Mike McColl, who took over the business from his father in 1986, says MRE now accounts for 80 per cent of the oval track chassis manufactured for NASCAR in Canada–properly known as the NASCAR Pinty’s Series. Oval-track cars account for the majority of MRE’s business, although the company also builds road-racing cars.

“Here in Canada there really isn’t much competition for us,” McColl says. “We’ve been able to sustain a good proportion of the business that’s out there.” 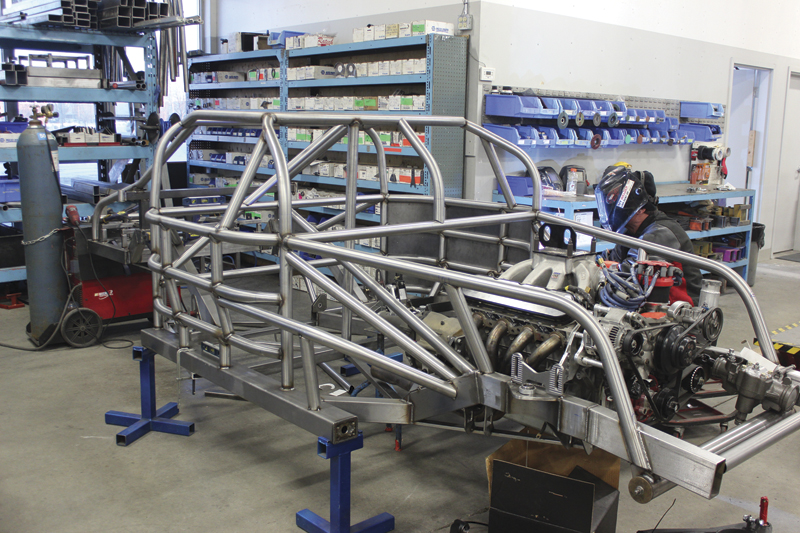 MRE builds 20 to 25 cars a year, all of it highly customized work, tailored to the requirements of the individual driver, to the type of racing and of course to NASCAR regulations. “We use three criteria in manufacturing chassis–safety, performance and affordability,” McColl says, though the latter term means something different to a serious race car driver. A car from MRE can cost from around $40,000 for non-professional racers to $100,000 at the top end. MRE gives customers exactly what they want, whether it’s the chassis alone, a fully assembled, ready-to-drive vehicle, or anything in between.

Welding chassis
“When a welder is welding up a chassis, he’s either tailoring the equipment to the thickness of the tubing, or he’s tailoring how fast he works. With the thinner pipe, you go faster so as not to get too much heat into it, and with thicker pipe you need to slow down.” Most experienced welders have developed their own preferred welding speed over the years, and so they will tend to increase or decrease the equipment output as required. But McColl prefers to do a chassis on one setting, adjusting his pace to cope with varying gauges. 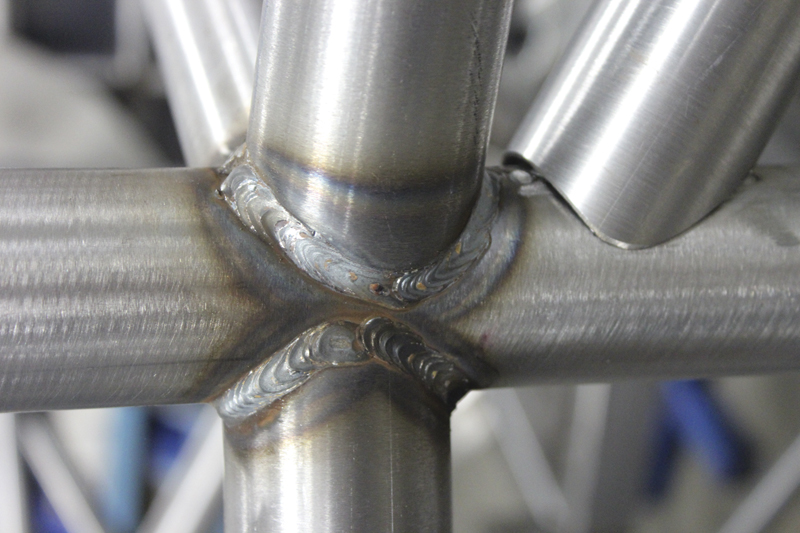 MRE has five Lincoln Electric gas metal arc (metal inert gas or MIG) welders, as almost all of the chassis are MIG welded. The wire-fed process is simply much faster than tungsten inert gas (TIG, or “Heliarc”) welding, though MRE is equipped for this too.

“The cars we build are mostly MIG welded,” McColl says. “But some chassis are made of chromoly tubing, and TIG welding is better for that due to the higher carbon content.” However, TIG welding takes longer and requires more experience. “It takes us probably a day to MIG weld a chassis. TIG welding one would take a couple of weeks.” 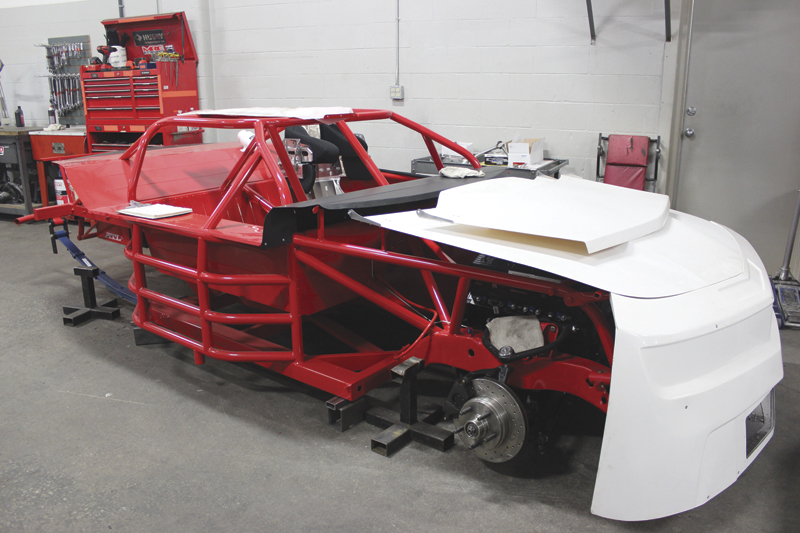 The chassis are built in three separate sections before final assembly: the front section (“front clip”), mid section (“roll cage”), and rear clip. When all three are finished they are welded together. Doing things this way minimizes the overall shrinkage and distortion created during the welding process. MRE has a machine to notch the tubing so the joins are flush before welding. Tubing is cut to length using a plasma cutter, which is also used to cut plate for other custom work, then bent and notched as required before being welded.

If all the customer wants is the chassis, the job is done when the welding and powder coating are done. Otherwise, MRE moves on to body work and interior fittings. Components formed with a press brake, shear and hand tools are welded into the vehicle. MRE can also custom fabricate suspension components.

Welding accounts for about a quarter of the overall work that MRE performs. “Fabricating, cutting, forming and fitting are probably about 75 per cent of what’s involved in building a chassis,” McColl says.

Commenting on MRE’s loyalty to Lincoln Electric for its welding pool, McColl notes that the company has used competing products in the past and he has looked around when making his purchase decisions. What keeps him coming back, he says, is the technology available from Lincoln Electric and the product quality. But there’s something else too. “Lincoln Electric has been a supporter of the racing industry, in particular NASCAR, for many years.”

While the company occupies a unique niche and is capable of making anything it needs on short notice, it also uses outside suppliers for some of the higher volume parts it uses. For example, each chassis needs around ten tabs–flat metal pieces with holes where bodywork is attached. They’re simple components to make, but during the October to April build season, MRE typically needs around 100 a month, so sourcing them elsewhere makes more sense. And the company doesn’t do the forming of body parts, though McColl says with a laugh that at least one employee would like to. 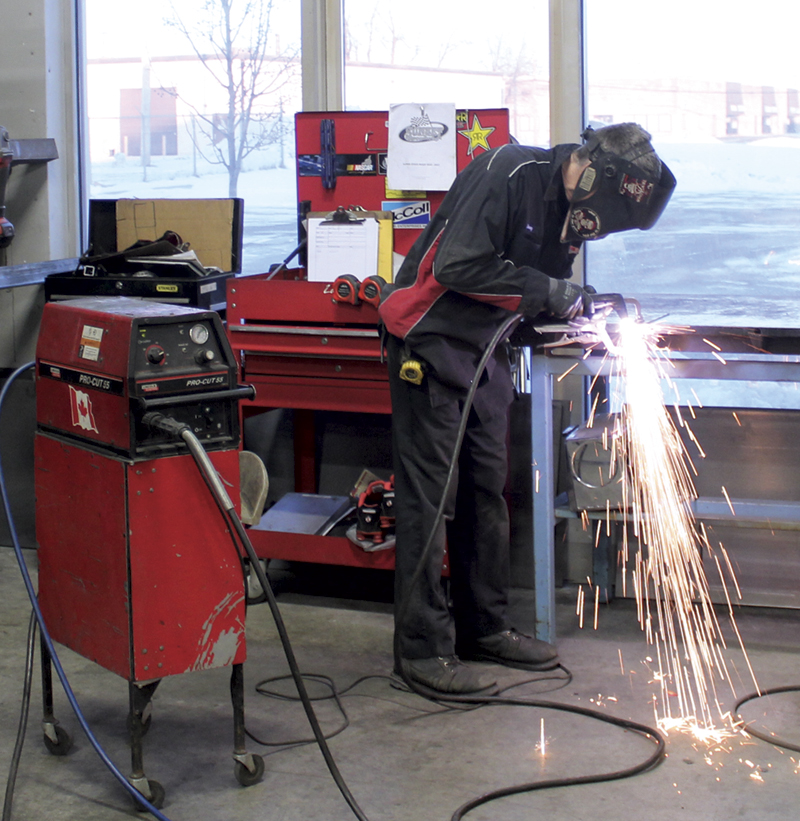 About half of MRE’s total space is dedicated to the main chassis work. The rest is taken up by the warehouse, office space, and a thriving front-end retail operation. “We get a lot of walk-in traffic on the retail side,” McColl says. “But we also do a lot of shipping out to customers.”

So far, McColl Racing Enterprises does almost all of its business within Canada. McColl says they’ve ‘dabbled’ in the US market but don’t have major plans south of the border. One standout, however, is the French customer who knocked on MRE’s door about six years ago and whose orders have helped to drive MRE’s volumes. The 47th and 48th cars for this customer were under construction when Shop Metalworking Technology visited. The customer sells the chassis into the European NASCAR circuit.

Everyone at MRE pitches in as they’re needed. The variety of work, added to the fact that each job is unique, keeps employees interested and accounts for McColl’s ability to retain employees. “The guys who work here know they’re going to be doing something different,” McColl says. “They do have their expertise areas, but they can all go outside of that.”

The employees also have a personal interest in the market they serve. A few work with racing teams in their spare time, and a couple of them race themselves. “They’re invested in the sport,” McColl says. “It’s good to see. They’re interested in the work. They’re enthusiastic about what they do.” SMT

LEADERS: CWB Group president Doug Luciani looks at the pitfalls and opportunities for the welding industry