Purchasing a welding gun? Consider these questions before you do.

Every welder knows the difference between a good weld and a bad one isn’t just about experience; it’s about having the right gun for the job. We’ve all heard the anecdotal evidence about the shop that took a shortcut to cut costs and used whatever existing guns were on hand for a weld, even if the application wasn’t well suited to the gun. We also know the dangerous results that can occur when the wrong tools are used in welding.

The amount of information available on different guns can overwhelm even an experienced welder who is looking to purchase a new welding gun.

We approached Bernard, ESAB, Lincoln Electric, and Miller Electric and asked them to put themselves in their customers’ shoes and consider the three most important questions to ask before purchasing a welding gun.

What is the right amperage rating or duty cycle for the application?
“Choosing the gun with proper amperage and duty cycle of the application is crucial in producing high quality welds and extending the life of the gun,” says Jay Yang, product manager, core products for Bernard. “Higher amperage guns are usually heavier. Thus, good ergonomics such
as handle grip and switch positioning need to be considered along with the rating of the gun.”

The industry norm is to rate guns on amperage, but the problem with this, says Josh Zaller, product manager for MIG semi-automatic handlheld guns with Lincoln Electric, “is that as welding technology advances, amperage has become less relevant when choosing a MIG gun. For example, to increase deposition rates, operators will run an extended stick out to preheat the wire and increase the melt-off rate. While the gun is farther from the actual weld, the power increases to maintain a steady arc. This increases heat in the gun, causing a 300 amp gun to fail in a 300 amp application. Another common application mistake occurs when operators increase voltage above recommended ranges. This increases deposition rates allowing operators to put more metal in a joint, the amperage levels stay the same, but the voltage drives heat back into the gun. Again, a 300 amp gun will fail on a 300 amp application.”

The gun rating doesn’t necessarily have to match the power source rating, adds Indy Datta, brand management with ESAB. “Generally, operators want the lightest gun they can get away with. For example, a gun rated at 350 amps might work perfectly well for welding at higher temperatures but at a lower duty cycle.”

What is the application?
This is an obvious but critical question to consider and includes many variables. Lincoln Electric’s Josh Zaller says there are four key areas to factor into this: what you’re welding (type of alloy and whether it is clean or dirty, thickness, position and procedure, such as multi-pass, v-groove or j-groove); how you’re welding it; what consumables you’re using; and the environment in which the gun will be used.

Another variable is the length of cable for your welding gun, says Bernard’s Jay Yang. “It needs to have enough length to reach everything you need to weld. Excess cable can cause wire feed problems and unsafe workspace clutter, whereas a cable that is too short could become damaged due to overstretching.”

Are spool guns necessary for welding aluminum?
ESAB’s Indy Datta says fabricators who routinely work with aluminum should consider them a “must have” accessory for smaller MIG or MIG/stick/TIG systems. “With a spool gun, the soft aluminum wire only gets pushed about 6 in. (152 mm) before it reaches the contact tip. Spool guns eliminate the downtime associated with the bird nests that inevitably occur when trying to weld aluminum with a conventional gun. 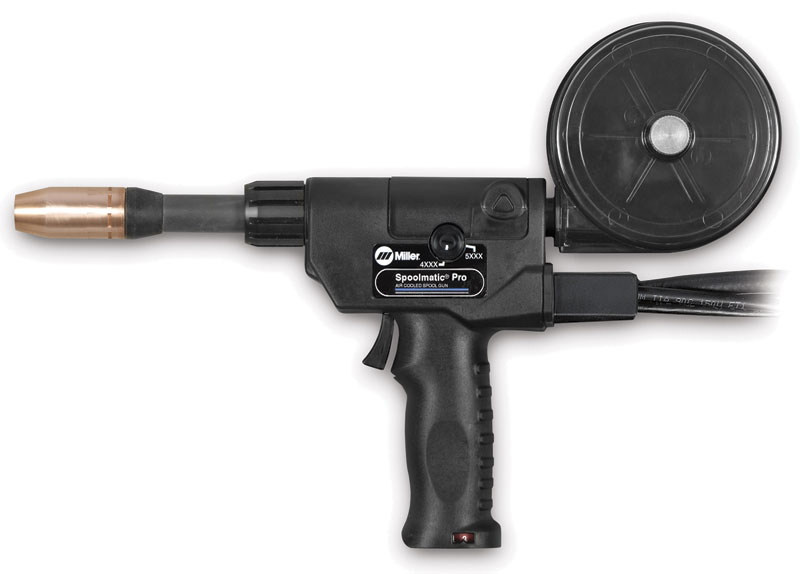 “Switching from steel to aluminum is as simple as resetting welding parameters and picking up the spool gun, as the power source automatically knows which gun is being used (note that these power sources feature two shielding gas solenoid valves for running two different gases, such as 100 per
cent argon for aluminum and C25 for mild steel).”

When is a push-pull system required for welding aluminum?
“If you want to weld aluminum further than 12 ft (4 m) from the power source, then a push-pull gun is a good option,” says Lincoln Electric’s Elliott Ash.

If you want to reduce the changeover time between spools using a spool gun, “switching to a push-pull gun will allow you to use larger spools (e.g. 16, 20 lb etc.) all the way up to bulk packages (275 and 300 lb) to feed the wire through a system,” continues Ash.

However, “push-pull MIG guns add extra moving parts and are complex to maintain, particularly in terms of how their motors coordinate with the motor in the wire feeder,” says ESAB’s Indy Datta.

How well does the push-pull gun feed aluminum wire?
It’s important to test any push-pull gun system for your specific welding application, says ESAB’s Indy Datta. That’s because “so many applications for this type of gun involve draping the cable over large weldments (boats, trailers, truck bodies).”

What length should I buy?
“Push-pull guns come in lengths from 15 ft (5 m) all the way up to 50 ft (15 m),” says Mike Vandenburg, product manager, industrial systems group with Miller Electric Mfg. Co. “It is best to measure the total work area you will be welding in, including length, height and width. After determining the work area, always select the shortest gun possible for the application to ensure the best possible feeding.”

If you need to weld far away from the feeder, Elliott Ash, a product manager with Lincoln Electric Manufacturing Co., says if the distance is more than 10 ft (3 m), then a push-pull gun is a good option. “There are some other applications for nickel and stainless wires because they typically are very rough on feeding and sometimes can be helped by introducing a push-pull gun to give more consistent feeding and a more stable arc.”

Should I buy an air-cooled or water-cooled gun?
You have to consider how long, and at what amperage range you will be welding at in your operation. “This is called the duty cycle rating and is measured at a given amperage during a ten minute period,” explains Miller’s Vandenburg. He cites an example of a welder using an air-cooled gun rated at 200 amps 100 per cent duty cycle welding at 250 amps continuously for ten minutes. “It would overheat and you should consider a water-cooled gun, which is typically rated for higher amperages.” 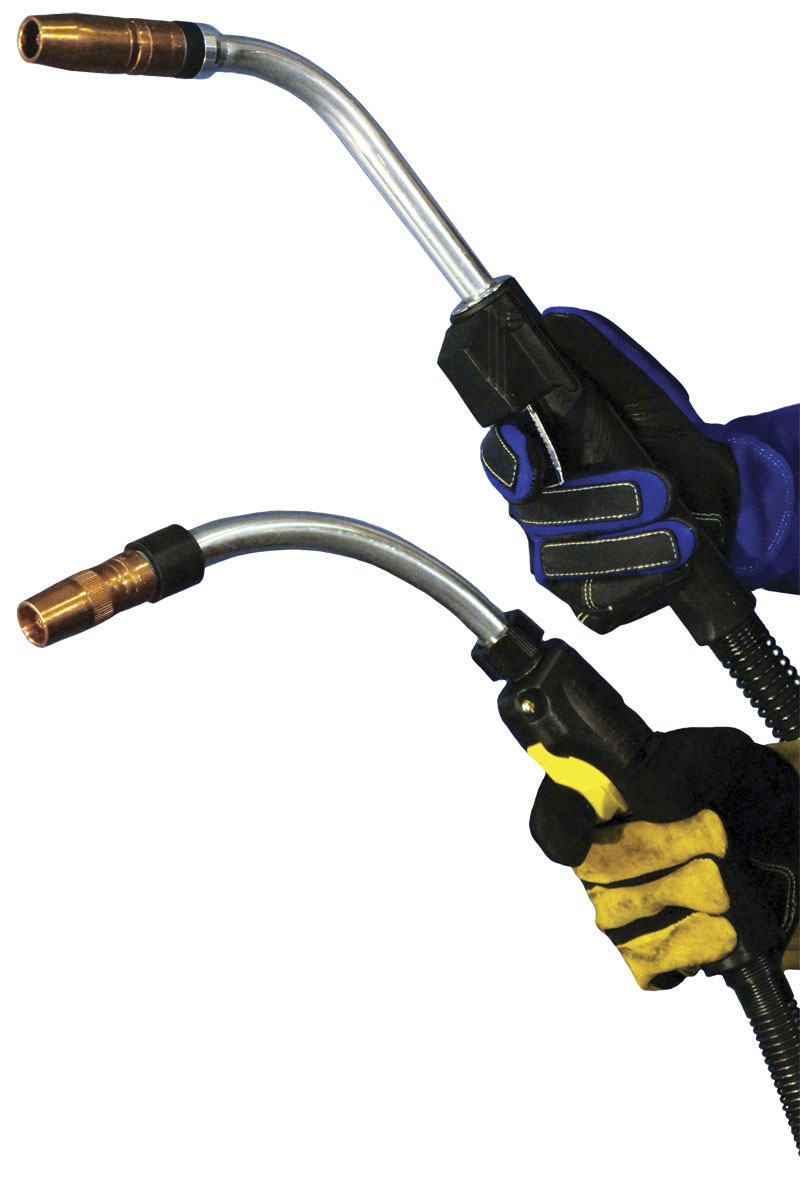 Each type of gun has its pros and cons, says Indy Datta, brand management with ESAB. “Air-cooled guns are simpler and cost less, but the gun and cable will weigh more because of the heavy duty construction required to dissipate the heat. Water-cooled guns weigh less and use a lighter cable, but the cooling system adds significant cost, requires ongoing maintenance, and makes the system impractical for mobile applications.”

Should I buy a gooseneck or pistol style gun?
Miller’s Vandenburg says the pistol style gun is best for straight line welding and can present challenges for welding in tight access areas, “but some welding operators find the balance is more comfortable.” Gooseneck style guns provide welders with a wider range of motion and flexibility to get into difficult areas. He says ultimately, it is up to the welder to select the gun he feels is most comfortable. “Most manufacturers offer optional head tube configurations for different weld joints that have the ability to rotate the head tubes.” SMT