When I started on the shop floor, machine tools were dumb. Communication levels weren’t determined by protocols or baud rates but by which machinist could yell the loudest. NC programs were loaded from paper tape, tool offsets made with a hammer, and part quality results recorded on handwritten forms.

What a change a few decades make. Today’s technology allows shops to monitor virtually every aspect of production, from what tools were changed yesterday to how many minutes the spindles sat idle last week to what jobs are running on which machines right now. So much has changed, in fact, that some say the next industrial revolution, or Industry 4.0, is upon us. 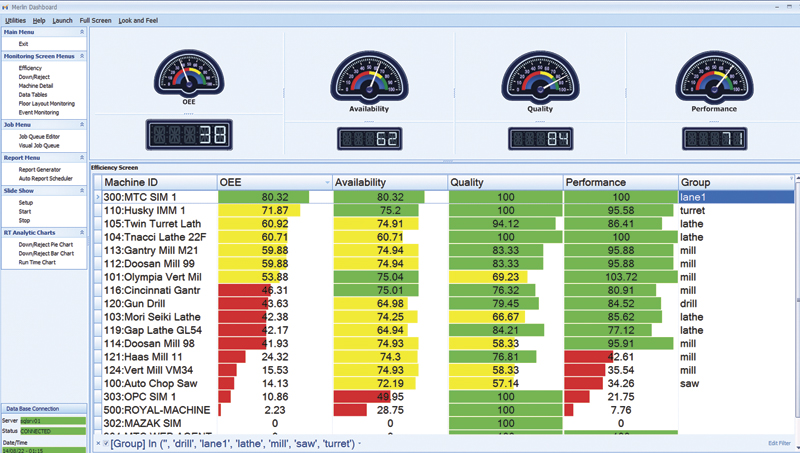 Getting everyone on the same page
One proponent of this revolution is David McPhail, president of industrial communications platform provider Memex Inc., in Burlington, ON, who counts Mazak Corp. among key global customers for the company’s flagship product, Merlin. McPhail points to data driven manufacturing and the Industrial Internet of Things (IIoT) as two examples of the technology companies can leverage to improve productivity and part quality, if only they have the will to overcome fear of the unknown.

“Change of any kind is hard, especially when people don’t understand the technology behind it,” he says. “But when someone thinks to themselves, ‘if I don’t do anything, then there’s no risk,’ it brings about the worst kind of paralysis. Manufacturing companies must learn to embrace technology if they are to gain a competitive advantage.”

Those advantages are numerous. Lights out production, shorter lead times, improved tool life—the list goes on. One often-overlooked benefit of integrated machine communication is better part quality, says McPhail. “Consider the situation where an operator is using a check fixture to inspect parts. By monitoring that fixture, data can be collected and trends analyzed automatically. When a part dimension approaches a set limit, an email can be sent automatically to the quality control supervisor, or a command given to the machine to shut down before it makes a bucketful of scrap.”

Twenty years ago, this was space age stuff. Today it’s increasingly routine, largely because machine tools and ancillary equipment now have a common protocol with which they can communicate, MTConnect. According to McPhail, MTConnect is the de facto standard for industrial communications, one that has been adopted by virtually all of the world’s machine tool builders. 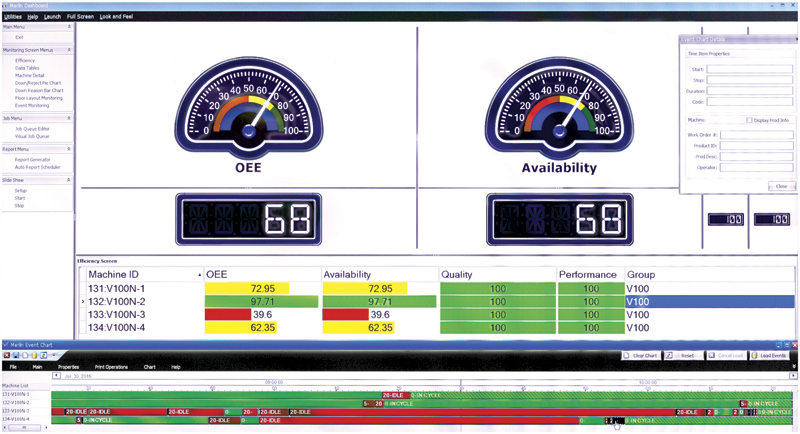 I’m iSMART
Mazak Corp. is one of these. The Kentucky-based company has adopted MTConnect for its iSmart factory concept, and uses it to collect in-process machine data at its manufacturing plant in Florence, KY. Vice president of manufacturing Ben Schawe says CNC mills and lathes, press brakes and lasers, paint booths, and even legacy equipment such as manual grinders are being monitored, with the possibility of far more in the future.

“It’s a work in progress,” says Schawe. “We’re primarily focused right now on machine utilization and overall equipment effectiveness (OEE), but every time we turn around, there are new possibilities. Any sort of sensor or machine-based signals can be captured and sent to a database for analysis and subsequent action by a software system. The MTConnect protocol makes all of the different machine controls equal in terms of data collection. It’s because of these possibilities that more and more companies are jumping on board.”

For those shops with inline inspection systems or on-machine probing, the handshake between metrology-based data collection and process control software is an important one. Jon Kulikowski, president of North American operations for measurement and testing equipment provider Blum-Novotest GmbH, says an increasing number of Tier I and Tier II manufacturers, especially in the automotive industry, refuse to work with suppliers that aren’t equipped with automated in-process inspection.

Achieving more with less
These systems range from basic spindle probing and tool measurement to onboard surface finish profilometers and 3D inspection of complex geometry in the machine tool. For those who balk at machine-based inspection, citing the “it’s only as accurate as the machine,” Kulikowski offers the following argument. “If you’re holding significantly tight tolerances, then yes, measuring in the machine is typically not a viable option. However, most shops aren’t trying to hold those tolerances, and if you consider the high accuracy of most machine tools today, in-process inspection often makes perfect sense.”

Another argument for automated inspection is labor cost. At the turn of the millennium, says Kulikowski, many shops were still of the mindset “one machine, one machinist.” But with the economic woes of the past decade, those days are largely gone. “When the bottom fell out, we saw a lot of people moving towards automation. You’re more likely to see one guy running ten machines now, and using in process inspection and monitoring to keep the process under control. Shops just can’t afford the labor anymore.”

Nor is good help easy to find. Because of this, Blum-Novotest and others are offering intelligent software that acts as a machine tool operator’s wingman, automatically checking that the right tool is in the machine, whether it’s cutting properly, and warning him to stop if problems loom.

Dreaming of tomorrow
“When the factory was built, the vision was that the whole system would be connected through the entire manufacturing flow,” says Julie Murphy, director of marketing for Okuma America Corporation. “Raw castings come in on one end, and finished machines go out the other end. It’s hard to tell our customers to invest in technology when we’re not willing to do it ourselves.” 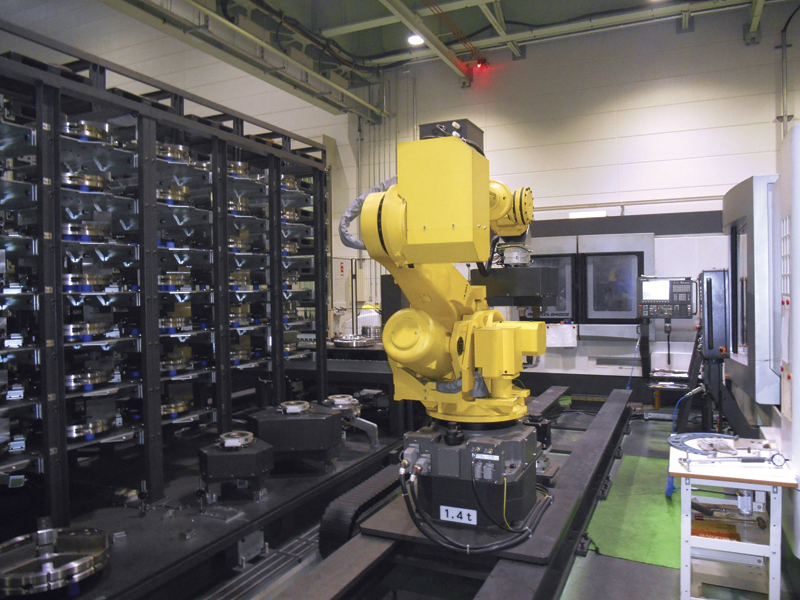 She’s talking about DS1, Okuma’s “Dream Site” factory in Oguchi, Japan, which the company built from the ground up and placed into production in 2013. By merging information technology with its machine tool building “know how,” Okuma was able to increase output by 30 per cent and cut lead times in half.

“We’re using a lot of automation,” says Murphy, “There’s everything from full-blown FMS systems to robotics, and all of it is integrated through our machine control. We utilize touch probes, for example, to collect in process data and analyze dimensional trends, making automatic tool offsets when a feature goes above or below a preset limit.”

Dream shops and smart factories? The average job shop or small manufacturer has neither the technical savvy nor the deep financial pockets of Okuma or Mazak, but that doesn’t mean they can’t benefit from the technology. Indeed, some level of digital manufacturing is within everyone’s reach, and can be achieved without breaking the bank.

“There are lots of partners and providers out there, ready to support small manufacturers,” Murphy says. “It’s easy to get tons and tons of data—what matters most is what you do with it, and how will it help you make better decisions. A simple spindle probe, for example, is easy to install on your machine, and will provide immediate visibility to what’s going on in the work envelope, which in turn helps to improve quality.”

Like Memex’s Dave McPhail said, success here is about mastering one’s fears. “We talk here in North America about the industrial Internet of things, and in Europe it’s Industry 4.0, and it’s a bit overwhelming for some people,” says Murphy. “But it doesn’t have to be. All it means is that the different sources of shop floor data are all interconnected, allowing you to make better decisions. That’s really what it comes down to.” SMT

OUTLOOK 2023: Ten steps on the path to resiliency for metalformers

Biden calls on Congress to prevent crippling rail shutdown in the U.S.