Fulvio Mini has been saving lives for more than 20 years as a non-destructive testing (NDT) technician. From the inspection of components at an independent inspection shop, to running the NDT operations of a major aircraft manufacturer, to being responsible for the NDT of aircraft during maintenance, repair and overhaul, he has had the opportunity to be involved with NDT in all aspects of an aircraft’s life cycle. Now a level three inspector and owner of UberSpec, a private inspection firm based in Mirabel, QC, Mini is well aware of the weight of his responsibility.

“How good we do our job is based on how few accidents are out there,” says Mini. “I don’t want to sound corny, but we do save lives. When we are finding parts that are cracked, if they would go back on the aircraft, who knows the implications of what would happen.”

Cracks, corrosion, inclusions, porosity and tears in an aircraft’s structure, or in any of its critical components, can compromise the safety of the aircraft. NDT is employed to ensure the safe and efficient operation of parts and equipment by detecting defects before they result in severe damage. It is comprised of a group of analysis techniques used to evaluate the properties of a material, component or system to ensure its integrity and compliance with standards, without causing damage.

In the aerospace industry, NDT is used both in the manufacturing of parts, as well as in the maintenance, repair and overhaul of aircraft. It is a critical activity because missed defects can result in downtime, lost equipment or worse. With that in mind, we’ve compiled this list of NDT best practices.

1. Hire qualified technicians: Like many other professions in the industrial arena, there is a shortage of skilled NDT inspectors.

“I’ve been in the industry for more than 20 years, and ever since I’ve stepped foot in it, there’s been a shortage of people,” says Mini.

Why? With five NDT methods typically used in the aerospace industry, technicians must be qualified to perform each technique. It’s not just formal training that’s required. They need on-the-job training, too, which takes time—anywhere from four months to a year for each method.

IMP Aerospace and Defence, a specialized Transport Canada approved maintenance organization for non-destructive testing, has more than 30 years of NDT aircraft experience for major Canadian and international military and commercial aircraft programs. Each of its NDT technicians are qualified to Canadian General Standards Board level two—front-line inspectors who have the skills and knowledge to accept or reject based on set criteria. They are required to train in theory and practical experience,
and must undergo standardized testing to ensure they can conduct the techniques reliably. 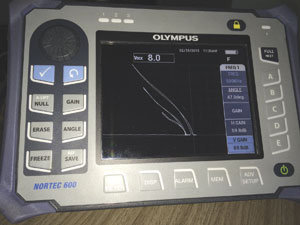 IMP’s NDT technicians represent only about two per cent of its productive workforce. And because it’s difficult to find skilled inspectors, the company is developing one of its junior employees to be an NDT technician.

Sonaca Montreal, a manufacturer of large aluminum wing surfaces for commercial and business aviation, also requires its seven NDT inspectors to be certified to level two.

2. Test equipment: IMP Aerospace and Defence has a large quantity of test samples and standards used during technique setup. This allows the operator to verify equipment capability prior to actually conducting the testing.

“A simple example,” says Kevin Lemke, vice president of production with IMP Aerospace and Defence, “would be when conducting conductivity tests, the equipment is set up and then used on a known standard to ensure the results are correct before proceeding with manufactured parts.”

3. Don’t cut corners: Sometimes inspectors cut corners to save time. Mini shares one example of an employee who wasn’t applying the developer during the liquid penetrant process.

“The developer helps draw penetrant out of the cracks, but a lot of people think that it does nothing, so they don’t put it on to save time. This event happened with an employee who never would put developer [on] until another technician showed him that it actually did bring out small flaws better,” he explains.

Mini requires his inspectors to follow the manuals of OEMs, which outline standard practices for inspecting their products or components, the parameters, as well as what constitutes a pass or fail. He says technicians should always follow the manual, even when inspecting a part that has never shown flaws.

“It doesn’t matter if you’ve done it a thousand times and this part never cracked,” says Mini. “We’re doing these inspections just to catch that one time when it does crack.”

Frederic Turski, quality manager with Sonaca Montreal, oversees the NDT inspectors on the company’s shop floor. Cutting corners is not an option in his facility, as each inspector carefully makes sure each part meets the required specifications.

“Every part that is machined in our facility, and even the ones that we buy from outside, must go through the NDT operation,” says Turski. “We make sure that the integrity of the aluminum is acceptable for each specification for each client.”

4. Keep it clean: Properly pre-cleaning the parts will minimize contamination and reduce the risk of error during liquid penetrant testing.

“If the pre-cleaning is not done properly,” explains Mini, “it can actually inhibit the penetrant from entering the flaws, and let rejectable parts through the system.”

5. Four eyes are better than two: Some companies require “double scrutiny” when it comes to analyzing x-ray film during radiographic testing. They’ll have two people look at the film at different times.

6. Implement automation: Some aspects of NDT in manufacturing can be automated. Sonaca Montreal recently updated its NDT facility, which allowed the company to improve its inspection process and increase the dimension of the parts it can test. The company automated the loading of the booms in its NDT booth, as well the application system for the liquid penetrant and developer, which has been optimized using an electrostatic system. This automation allows the company to inspect more parts per day than before.

Non-destructive testing is more than dipping parts in liquid and inspecting them for flaws, says Mini. Done correctly, with the help of best practices, it’s about prevention and it’s about savings—saving money, saving parts and equipment from failure, and ultimately saving lives. SMT

OUTLOOK 2023: Ten steps on the path to resiliency for metalformers

Biden calls on Congress to prevent crippling rail shutdown in the U.S.