Computer control, precision components and modularity mean CNC CMMs can keep pace with you as you grow, adding advanced capabilities to improve your productivity and maximize the return on your investment. That has been the case at Vector Aerospace of Summerside, PEI, which has enhanced its metrology capabilities dramatically with upgrades to its CMM.

The firm’s facility of about 11,000 sq m is located in Slemon Park, a former air force base. It has about 434 employees. It is one of the leading aerospace shops in the Atlantic region, notes Gary Sinasac, sales and application specialist, Mitutoyo Canada Inc., Mississauga ON.

Among other industry certifications, the company works to ISO 9001:2008 and AS9110B, notes Scott Smallwood, operations manager.

The work
The nature of the work dictates a commitment to work on a variety of complex parts to very high levels of quality with quick turnarounds. Some of the complex components the firm worked with were difficult to measure with manual methods. An upgrade to its measuring technology was in order.

A CNC CMM was added to the manual machine that has been in use since the firm started out. Vector purchased a Crysta-Apex C121210 from Mitutoyo Canada in 2009. The new machine helped considerably with throughput. It offered improvements in accuracy as well, even though the manual machine had given them no real concerns about accuracy, says Smallwood. The CNC machine enabled Vector to increase the consistency of the points being measured and to measure more points more efficiently.

Scan head
As Vector became more proficient with the CNC machine, the company looked at further increasing its capability, beyond the touch probe it was using.

Some complex parts were presenting challenges. One compressor stator, for example, had a concave shape that was difficult to measure conventionally. The answer turned out to be a scan head for the CMM, which the company acquired about two and a half years ago.

“They do a lot of diameters, and the scanning head–which is a constant-contact head–can do diameters in a tenth of the time of a touch probe,” says Sinasac.

As it scans the part, it is collecting thousands of points per second, making it suitable for an irregular shape like a turbine blade.

“That, together with the software that enables it, has definitely increased the accuracy, well beyond our needs,” says Smallwood. When the scan head arrived, Vector spent some time experimenting with it and coming to understand it. The training followed that.

“It went pretty well, right from the beginning,” say Smallwood. “It took a couple of months to get up to speed. We were able to get a handle on basic operations pretty quickly.”

Software
Another significant upgrade was in the control software, to MCOSMOS CNC Level 2 Ver. 4.0, introduced to the market just over a year ago, according to Sinasac.

Smallwood is a strong believer in CNC software updates, to ensure the firm stays current with the supplier. He prefers to avoid rush situations where the company is driven to upgrade by technological change.

The new software helps the shop manage the much greater quantities of data the scan head is giving them. As well, “it enables us to keep growing, with accessories and future developments,” says Smallwood.

These benefits were capped by the software’s capacity for remote support from the vendor. That was “probably the biggest draw for us in upgrading the software,” says Smallwood.

The vendor is able to see what is going on with the control and software from its Mississauga, ON, facility, aiding technical and training support.

Programming and software issues can be addressed easily. Both Smallwood and Sinasac cite this capability as being fast, efficient and inexpensive.

In terms of future development, the software is capable of being programmed with data input from a CAD model. 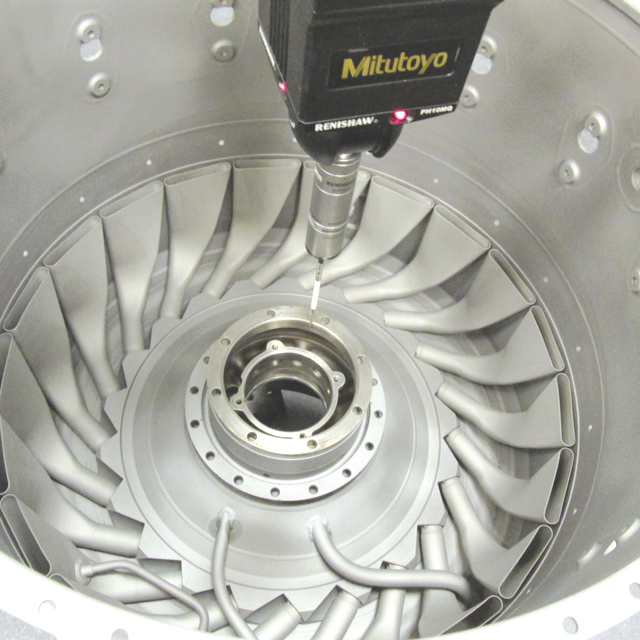 “The software supports this now,” says Smallwood, and the firm intends to develop this capability soon.

Another upgrade consisted of a modular rack system, notes Sinasac, “it is part of the program. If they have to change a probe, it can be changed automatically without stopping the machine,” he says. “Once it is programmed, you can walk away from it, come back later and the program is done.

Training
Training is key with such a sophisticated piece of technology.

“We’re not using that scan head to its full potential, yet,” says Smallwood. When the scan head came in, he was concerned there was not enough trained staff. “We had one very clever individual working with the machine, who is able to work through a lot of the basic challenges,” he notes.

All the training came from Mitutoyo. Three full-time staff work with the CMM, with three more available that are capable of working with it when needed.

In the first round of training, Vector sent staff to the Mitutoyo facility. “In the next round, we’re planning on asking them to come to us,” says Smallwood.

For Vector Aerospace, upgrading, training and experimentation provided major increases in capability while maximizing the return on the original investment. SMT

Jim Barnes is a contributing editor to Shop Metalworking Technology.

Canadian GDP likely up 0.4% in fourth quarter and 3.8% for the year

Small and medium-sized businesses being targeted for cyber attacks

INSIDE THE NUMBERS: Are Canadian metalworkers changing their equipment investment plans?