Despite the hovering economic challenges, thousands of manufacturers attended the 2019 Canadian Manufacturing Technology Show (CMTS), which took place September 30 to October 3 at the International Centre in Mississauga, ON.

The official numbers aren’t in yet, but based on what Shop Metalworking Technology Magazine witnessed, it was well attended.

What seemed different at this event was the level of interest in automation and Industry 4.0 tools. Neither are new components to manufacturing and in fact have been present at trade shows for many years, but exhibitors Shop Metalworking spoke with said there was more “real” interest in exploring automation, robotics and Industry 4.0 tools. Indeed, one exhibitor joked that the interest in an automated loader being demonstrated on a machine tool stole the show away from the actual machine.

A highlight of CMTS 2019 was keynote speaker Jean Charest, currently a partner with McCarthy Tetrault LLP who served as the premier of Quebec from 2003 to 2012.

A packed room listened to his talk in which he made a point of stressing the importance of trade for a country like Canada and how it has to fight to get good agreements. He highlighted two emerging trends that will impact world economies: the rapidly growing middle class emerging around the world except in North America: “the creation of this new middle class is the biggest thing since the creation of capitalism” and the rising debt levels in our economy: “we have never been more in debt than now.”

While Canada has its challenges Charest says Canada is a good place to do business but that governments will have to put in place the right policies to ensure companies continue to invest in their businesses and in people.

CMTS 2021 will take place October 4-7 at the International Centre in Mississauga, ON. 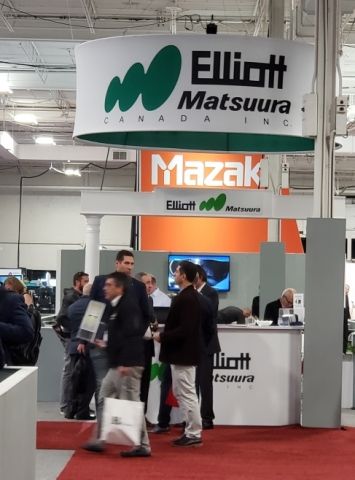 Manufacturing has much growing to do to get to digital maturity: ABI Research

INSIDE THE NUMBERS: How quickly will automation be adopted in manufacturing?

Deploying AI at the edge: from operation to automation

KUKA to showcase automation for Human/Machine Collaboration at ATX West