Horizontal boring mills have long represented the pinnacle of accuracy in large part machining. With names like Giddings & Lewis, Kearney & Trecker, DeVlieg, and Cincinnati, these were the machines that won wars and helped spawn an Industrial Revolution. That’s because a boring mill’s extendable “quill,” or W axis, allows it to reach deep into workpieces, while a massive table and equally massive travels make it possible to machine even the largest of components. Given enough time, there’s little a skilled craftsperson can’t do with such equipment. And there’s the rub. Unfortunately, many of these talented people have gone the way of their machinery, pushing up metal daisies somewhere or resting in a retirement home, dreaming of making chips.

Nor is time the luxury it once was. The days of sneaking up on a tight bore or whittling away at a part for hours or days are gone. Shops need speed and rigidity, attributes that boring mills have historically been a bit short on. That, and manufacturers can no longer afford multiple setups, never mind the fixturing needed to support them. And even though boring mills are known for their accuracy, meeting critical tolerances is made much easier when all related features are machined in a single part handling, something impossible to achieve without modern, multi-functional “done in one” machine tools. Simply put, boring mills are starting to look a little…boring.

Enter the portal
There’s also flexibility to consider. “I think boring mills have dropped in popularity because there are so many different machine tool options out there,” says John Baresic, applications manager for DMG MORI Canada. “Compared to many of the newer styles of equipment, boring mills are quite specific in what they do and people are looking for equipment that can be repurposed easily based on changing needs. Any large machine like this is a significant investment, and it’s important to get the greatest value and usability possible.”

That’s not to say boring mills don’t have their place. Baresic is quick to note their continued use—and sometimes preference—among the heavy equipment, shipbuilding, and even aerospace industries, among others. “There is still a need and purpose for them out there,” he says, “although we’ve been able to show customers on many occasions where they can improve their overall process, efficiency, part quality, and so on by moving to a portal type machining centre.”

At first glance, DMG MORI’s portal mill looks much like any gantry or bridge mill. Appearances can be deceiving, though, as the portal mill is available in a variety of configurations. All portal mills offer five axis simultaneous machining capabilities, but it’s also available as a mill-turn centre, or can be equipped with grinding and power skiving capabilities.

“It’s endless, really,” says Baresic. “Think about all the dedicated equipment and additional processing steps that a manufacturer can eliminate by investing in a machine tool like this. Depending on the machine model, a single portal mill can act as a vertical turret lathe, a gun-drill, a gear skiver or a mill-turn machine, and it’s accurate enough that you can often inspect the parts directly on the machine, eliminating further handling. This makes portal mills an excellent choice for anyone doing die-mould, aerospace, and other complex, close tolerance work.”

Given the increasing popularity of mill-turn centres and multitasking lathes, these are the same capabilities that small parts makers have come to appreciate over the past two decades. Reduced handling and the ability to machine complex parts in a single step, however, is even more important when the workpiece is the size of a pickup truck, and quite possibly costing more than a house in the suburbs.

Milling shoeboxes
In all fairness, today’s boring mills bear only a passing resemblance to the hulking dinosaurs described at the beginning of this article. Like all machine tools, their accuracy, stability, speed and power have improved greatly over the decades, and few can argue that a W axis quill can sometimes go places that a machining centre spindle can’t. This is why DMG MORI augments its portal and gantry mill offerings with the Kuraki line of boring mills, and is also why machine builder Mazak offers a “Q” version (stands for quill) of its HCN series of horizontal machining centres.

“I would classify the HCN-Q as a boring mill,” says Mike Kerscher, national applications engineering manager for Mazak USA. “It’s a great option for large shoebox-shaped parts, for instance, with internal part features that a bridge-style vertical mill might be unable to reach. Bridge machines also tend to be more limited on height than boring mills, so if you need to stand that shoebox on end, a boring mill could be a better choice. That said, the higher you go, the more problems you’re going to have with deflection, so I can make a strong argument for laying the part down whenever possible, which now makes a bridge mill more suitable. Machine selection is very application specific, though, so it’s hard to make generalizations like this.”

Kerscher says much the same thing as Baresic; that the number of machine options and configurations—and therefore flexibility—is greater once you move beyond boring mills. He points to Mazak’s Integrex e-Vertical series as one example, a five axis, tilt spindle machining centre with turning and pallet changing capabilities. “It’s a best-of-both solution, a bridge-type mill that can machine from the top or sides, and turn parts up to 1800 mm (137 in.) in diameter,” Kerscher says. “The machine is also available in a Ramtec version, with a ram that allows access to internal features.” 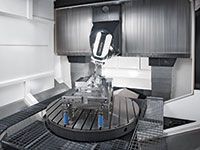 Boring thinking
Despite the potential of multitasking portal, bridge and gantry style machines, all of them frequently face the same roadblock: the status quo. “You can no longer be successful with a boring mill mentality, where you have a highly skilled machine operator who nursemaids the process,” says Kerscher. “We’ve all seen it, where the machinist takes a pass, stops the machine to measure the part, then takes another pass, and another. The part might sit on the boring mill for days because he or she is the only one in the shop who can finesse this giant part into tolerance.”

Kerscher notes that even the most modern of shops, those who’ve invested in modern CNC equipment, tooling systems, in-process probing and toolpath simulation software, sometimes struggle with releasing this outdated way of thinking. A better approach, he says, is to develop a superior process, leave the door closed, and trust in the machine.

Attachment attraction
Tom O’Toole agrees that boring mills have their place, but suggests another way to gain machine tool flexibility: attachments. “The only advantage a boring mill has over a bridge mill would be the W axis, and for that you give up some measure of rigidity,” says the principal sales engineer for Okuma America Corp. “The way we get around those long reach situations is with an attachment that replicates a boring mill’s W axis.”

This isn’t an afterthought, he adds, but rather a strategy of bringing maximum value to a not-inconsiderable investment. With “a hundred or so different attachments” available in the Okuma catalog, O’Toole says he can make one of the company’s MCR or VTR-series double column machines do side work, inside work, angle work…pretty much all five sides plus the interior of most workpieces, and offer greater rigidity and accuracy than a boring mill to boot.

As to the potential height limitations of a bridge-style machine, O’Toole says it’s a standard option at Okuma to pour additional iron during machine construction, raising the column a full two meters if desired. And despite his earlier comment about replicating a boring mill’s quill, it’s probably unnecessary, since the machine’s vertical ram is also equipped with a “contouring” axis, which is called—you guessed it, a W axis.

“We’ve seen a lot of shops replace their boring mills with our double column machines recently,” he says. “That’s because even a modern boring mill is basically the same machine it’s always been, whereas double column, bridge, gantry mills—whatever you call them, they’ve evolved over the years. The technology’s developed to the point that customers can now clamp the part down once and get everything done in one setup. That’s something a boring mill can’t do.” SMT