For some shop owners, the vertical machining centre is the old faithful in in the corner… good at what it does, but not capable of spectacular achievements in accuracy or productivity. It may be time for a re-think.

“A lot of folks are familiar with verticals the way they used to be… big, geared-head machines. They had a brute-force mentality about manufacturing. More power, more torque – basically, force the metal off,” says Bill Howard, product line manager, Vertical Machine Centers, Makino Inc.

Today, you are getting higher surface footages from higher speeds and feeds. “Some of our machining centres come with up to 50,000-rpm spindles,” changing the game in productivity and accuracy, says Howard. “It’s a new concept, and people can be a little hesitant until they jump into the pool.”

It’s almost two diverging trends… “Higher spindle speed and torque on one kind of machine, and higher power and torque on the other,” says Howard.

The vast majority of the market is for mid-range, general-usage machines, says Andy McNamara, director of Sales and Marketing North America, Hardinge Inc. These machines have undergone steady evolution, according to the experts. Integrated pallet changers, rotary products, controls that are more powerful and higher torque ratings are changing the game. 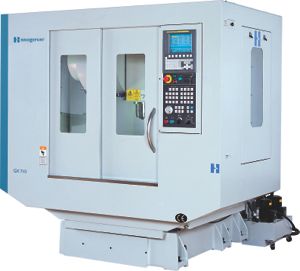 “There’s a big misconception that you can’t hold tight tolerances on a basic machine. It’s a tough sell – getting that out of people’s minds. You have to prove it to them,” says Bryan O’Fallon, product technical specialist, Milling, Haas Automation, Inc. “The lines (between general-purpose and high-accuracy VMCs) are getting more blurred all the time.  Modern tools, CAM systems, more accurate encoders and improved software motion control mean that you can hold some incredibly close tolerances on what we used to think of as a basic machine,” adds O’Fallon.

The high-precision machines incorporate technologies that bring out skepticism in some users.

For example, “Some users still think that a boxway machine is the only way to go. That absolutely is not the case,” notes McNamara. “A good linear guide or roller guide system will give you better productivity and accuracy.”

High-speed tooling offers better repeatability in and out of the spindle and better stiffness. That offers the potential for better finishes and tolerances and longer tool life, says McNamara.

Heat is the enemy of spindle life and accuracy and high-end machines are designed to deal with the thermal effects of machining. “A lot of people just try to compensate for heat… there are many, many approaches to doing that. A better approach is to use technology like chillers and heat sinks,” says McNamara.

“On our VMCs, we use a system called dynamic thermal compensation. It measures the change of temperature in the key areas around the spindle head, and is constantly compensating for those changes,” he says.

Spec’ing can be a challenging task for the user. For example, some builders publish only their peak horsepower numbers. “There is a big difference between a one-minute rating, a 30-minute rating and a continuous rating,” notes McNamara. Let the buyer beware: make sure you are comparing apples to apples.

Be accurate about your requirements for the spindle. “A customer will spec a 12,000-rpm spindle, even though he never goes higher than 8,000 or 10,000,” says McNamara. “People don’t understand spindle life. If you are going to run a spindle at 10,000 rpm for 16 hours a day, 360 days a year, you had better make sure you are maintaining it properly. Even so, spindles have a lifetime.”

The benefits of the high-precision technology are many. “You can run higher speeds and feeds and higher surface footages, and be more productive than you can by using brute force to take the metal off the part,” says Howard. “There is less force in the part, and force and heat distort the part,” and productivity is enhanced as well.

Are users keeping up to date with the technology? “In many cases, VMCs are not being used to their full potential.  One of our biggest success stories is in getting customers to start using a wireless probing system.  Work offsets, tool offsets, broken tool detection… all easily done and very user-friendly,” says O’Fallon.

“Convincing people to use quality tooling and then be aggressive with their cuts, feeds, speeds, and so on can be difficult.  When we do cutting demos, people see what we’re doing and often say, ‘Wow I’d be scared to run that fast,’” says O’Fallon.

“The new technology is counter-intuitive to what many in the industry have been doing for years,” says Howard.

Howard suggests that there are three types of VMC, with a new, distinct category aimed at the micro-machining, nano-precision market. These machines offer micron accuracy with high repeatability. “You are making parts that are so accurate that you have to go to white-light measurement technology to measure surface finishes and other parameters.” 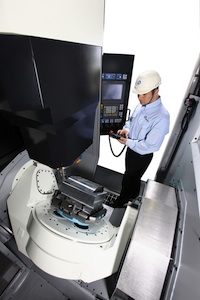 “It takes precision to a whole new level,” he says, with interest coming from the microelectronics, medical device and mouldmaking industries.

Thermal control is a cornerstone. Three separate tactics are used to cooling the spindle: cooling the core of the spindle; cooling the bearings from the inside; and a jacket around the entire spindle that maintains the temperatures of the windings, armature and other components.

On the IQ300 micro precision VMC, the entire work zone is environmentally controlled. “We pass temperature-controlled coolant through the bed and column of that machine to maintain a stable temperature,” says Howard.

The standard for that machine is a 45,000-rpm spindle, with a 50,000-rpm model available. “You are using very, very small tooling and surface footages, so to be productive you need higher spindle rpms,” says Howard.

Sophisticated controls are needed, too, since there have to be higher and higher levels of block processing speed to support higher feed rates and contour accurately.

Jim Barnes is a Toronto-based business journalist with 30 years of experience in writing about technology.