Long considered a mature technology and a production workhorse, the horizontal machining centre is back in the winner’s circle

Higher-end builders are strongly motivated to improve their offerings.

“There are many builders and a lot of demand. The product has been commoditized. It is important for a builder to stand out from the crowd of cheaper machines,” says Vince D’Alessio, executive vice president, Elliott Matsuura Canada, Oakville, ON.

Significant evolution has taken place in the concept over the past five years. One example of the new generation is the DMG 60H from DMG Canada Inc., Mississauga, ON, says Roberto Colombo, application manager.

“The new machine is intended for mainstream horizontal applications, with improved speed and accuracy,” he says. High speeds come from the use of linear motors. A five-axis table is available, and the tool magazine has been designed to optimize chip-to-chip time.

“The whole machine is about optimizing cycle times,” says Colombo. “We can provide the machines standard with a straight, horizontal head, or as part of a custom solution.” 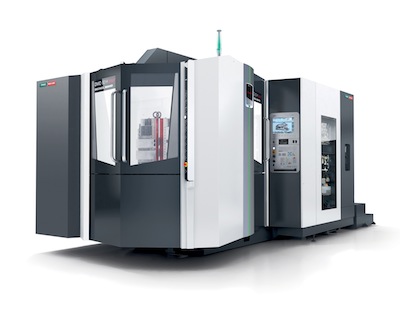 According to D’Alessio, Matsuura has improved machine performance and put more emphasis on automation.

Evolution has been steady, says Ray Buxton, general manager, Mazak Corp. Canada in Cambridge, ON. Integration is a major emphasis. “Pretty much all horizontals have a pallet changer. By going to a pallet system, you can increase the spindle-in-cut time substantially and reduce your operating costs,” says Buxton. “If you work on families of parts, setting the machines up in a Palletech system gets your spindle utilization even higher.”

“For example, integrating a horizontal and a vertical in a cell using Palletech combines the material removal capability and rigidity of a horizontal with the flexibility and “done-in-one” capability of the vertical,” he adds.

Bigger, harder workpieces are another target of HMC design. The oil and gas, mining, construction, and power-generation markets are driving this trend, says D’Alessio. “There is also more demand for cutting harder materials such as titanium, Inconels and 4140 high-tensile strength steels… Matsuura is developing horizontals that are optimized for that type of manufacturing,” says D’Alessio. “They have the power, the feeds and speeds and the rigidity for that type of work.” 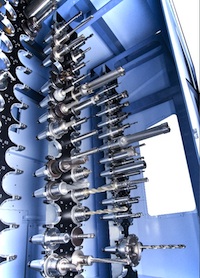 Mazak is also focusing on tough materials. “We offer a couple of machines now with the Hard Metal Package. They are specifically geared to machining titanium and stainless steel in the aerospace market,” says Buxton. The enhancements include greater servo thrust, higher-torque spindles and a stiffer casting.

Horizontals are well suited to removal of large volumes of material. That could be in high-volume production or an aerospace environment where a lot of material has to be removed, notes Buxton. 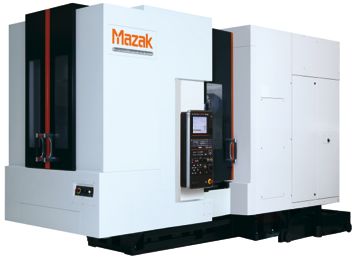 Even with smaller batch sizes, a horizontal may be a better solution than a vertical. It is easier to automate, especially if you have a mix of parts that come through your shop on a consistent basis, says D’Alessio. The pallet changer means high levels of spindle utilization: you can be setting up the next job while the machine is cutting.

While five-axis machining is getting a lot of attention these days, D’Alessio says that some five-axis parts, depending on the production range, might be produced more efficiently on a horizontal.

“With a horizontal machine, you can gang up parts on the four sides of a tombstone – and you might be more efficient, doing multiple parts on the pallet to reduce cycle times,” says D’Alessio. “You can be more productive, even with a second setup.”

Thinking of retrofitting your HMC? Read this.

Jim Barnes is a Toronto-based business journalist with more than thirty years of experience.