When you’re a resource rich economy and one of your key sectors hits rock bottom, it’s going to hurt. Such has been the case for Canada with stubbornly low oil prices throwing a dark shadow on this country’s economy.

Yet against this backdrop, manufacturers have continued to operate and in some instances expanded their businesses. Indeed, for many who participated in two recent surveys conducted by Shop Metalworking Technology Magazine, you might describe their outlook as cautiously optimistic.

Investing for growth
In one recent survey, 50 per cent of the 258 participants noted they plan to hire employees for their manufacturing operations, while another 24 per cent noted they planned to expand operations. And when asked about machinery and equipment purchasing plans for 2017, close to 50 per cent said they would invest about the same as 2016, while 29 per cent said they would invest more, with 23 per cent noting they would invest less. Of particular note was the specific technologies participants expect to purchase in 2017. Among both chip and fabrication and welding shops, automation and robotics was cited as one of the leading areas of investment with 16 per cent of participants and 12 per cent respectively selecting this technology category. Among chip shops, machining centres was the top technology businesses plan to purchase in 2017 (17 per cent) and among fabrication and welding shops, welding equipment was the top choice (29 per cent). 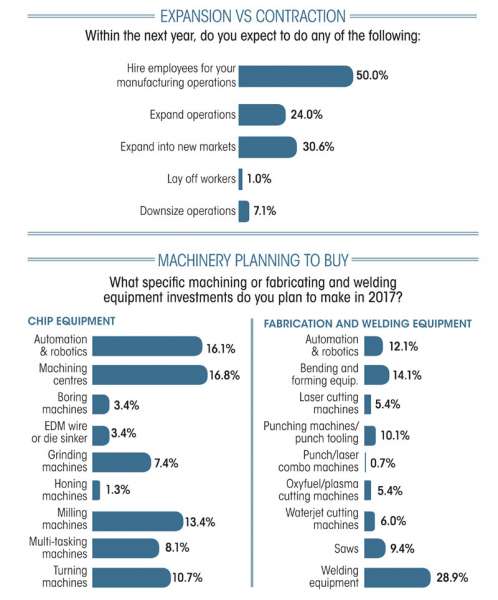 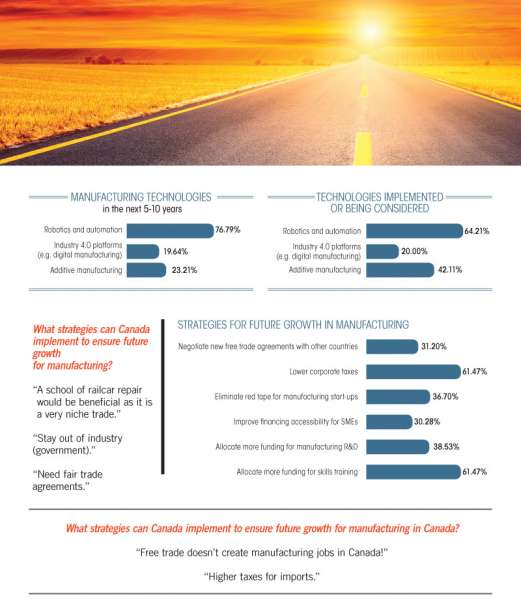 Strategies for success
Much as been written about the strategies you need to succeed in manufacturing in Canada, but the truth is, there isn’t one simple solution that fits every business. We asked participants what key strategies Canada should implement to ensure future growth. Lower corporate taxes and allocation of more funding for skills training were the top items, followed by allocation of more funding for manufacturing R&D.