Airplane wings are wondrous things. If you’ve ever flown through a thunderstorm, wondering how much flex those thin metal structures can endure, or experienced the gut wrenching terror of mid-flight wind shear, you’ve probably given mental thanks to the folks who manufacture them. One of these is Sonaca Montreal. A subsidiary of the Belgium-based Sonaca Group, a Tier 1 aerospace supplier with design, build, and certification authority, Sonaca’s Montreal operation specializes in advanced forming of wing skins, and machining, assembly, and finishing of complex aerostructures.

To remain successful in a fiercely competitive market, Sonaca took steps recently to become a one-stop shop for its customers.

“We’ve always been known for our ability to form complex wing shapes, most of which have the stringers machined directly into the panel. That’s really our specialty,” says Paul Stafiej, VP of strategy and business development at Sonaca North America in Mirabel, QC. “But some of our customers want, for example, a riveted, two-piece stringer and skin assembly, rather than an integral one, so we would end up buying machined components from someone else, and then assemble and finish the wing structures here. And of course, there’s always the possibility of quality and delivery problems when buying parts from someone else. That’s what drove us to purchase the Modig.”

Beyond Kitty Hawk
Although materials and manufacturing technology have improved greatly over the past century, the basic structure of aircraft wings has changed little since the days of the Wright Brothers. From the Avro bombers of WWII to the Bombardier Dash 8 turboprops still flying the skies today, wings are composed of a checkerboard pattern of spars and ribs. Stringers run lengthwise along the wing and are attached to the tops and bottoms of the ribs, holding the assembly together and giving it additional strength. Wrapped around this structure is the skin, which provides the aerodynamic surfaces so critical to flight.

Of course, the wings in today’s aircraft are far more complex than those used at Kitty Hawk. Chock full of electrical wiring, sensors for temperature, air speed, and barometric pressure, hydraulic lines and valves, fuel systems, and myriad mechanical components, aircraft wings are part of a synergistic system that drives the modern world. 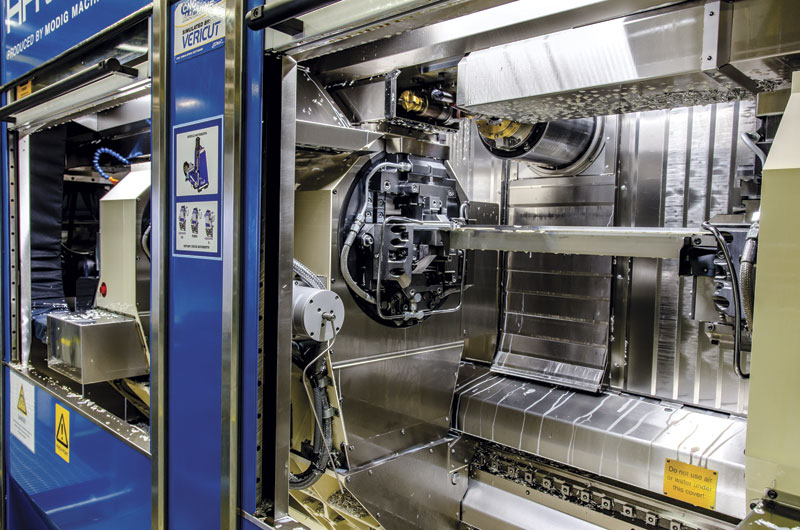 Someone who knows all about it is Paul Stafiej. He says Sonaca’s Montreal facility focuses on aircraft wing structures, and supplies aluminum wing panels to the likes of Bombardier, Embraer, Triumph, Mitsubishi, and others.

With 300 employees and 21,800 sq m (235,000 sq ft) of manufacturing space, the company operates round the clock. Its trio of Cincinnati three-spindle, five axis gantry mills can machine 42 m-long (140 ft) workpieces, while Sonaca’s automated painting and anodizing lines handle wing assemblies up to 18 m (60 ft) in length. It also has two automated riveting lines, capable of drilling, countersinking, and installing threaded fasteners or solid rivets. “We’re a fully integrated operation, with all of the necessary processes under one roof,” says Stafiej. “By machining right through to assembly, testing, and finishing of wing structures, we offer a shorter cycle time and allow the customer to avoid unnecessary logistics costs.”

Transitioning to total control
It wasn’t always that way, and it wasn’t always Sonaca Montreal. National Metal Finishing (NMF) began as a privately owned shot peening service company in 1992, and earned a name for itself as the go-to place for peen forming of wing panels. Unfortunately, the economic downturn following 9-11 hit the company hard and the owner took the difficult decision to sell. After negotiations with Sonaca Group, NMF became part of the aerospace company’s seven facility, 2,400 employee family.

Although Sonaca Montreal has expanded greatly since that time, shot peening remains an important part of its offering. The process induces a compressive layer on metal surfaces, and is used extensively for fatigue improvement and strengthening of aerospace components. In the case of peen forming, this compression can be used to “curl” metal into a desired shape. “All of our skins are built through saturation peening,” says Stafiej. “This has always been a core part of our business, but in an effort to become a one-stop shop, we had to expand our capabilities.”

Sonaca Montreal recently took another step towards that goal. Because it operates the longest anodizing tanks in Canada, and can also perform peening and non-destructive testing processes, Sonaca has long been a preferred provider of these services to other aerospace manufacturers, taking in machined parts on a subcontract basis and finishing them. Over time, management recognized that, given the right equipment, many of these parts could be machined in-house.

Also, because most of Sonaca’s available gantry mill time went towards wing panel machining, there was little capacity for other work such as stringers and spars. As a result, Sonaca found itself subcontracting these parts to other shops, which spurred the purchase of the Modig extrusion mill.

Extrusion excellence
The Modig HHV Extrusion Mill, is 28,000 rpm, 24-tool ATC universal machining centre designed for aerospace parts, including stringers, floor beams, and other long, extrusion-based components. Designed and built by Modig Machine Tool AB, Virserum, Sweden, the HHV is equipped with three rotary chucks, which grip bar stock and extruded materials up to 254 mm across (10 in.) from both ends simultaneously. These support the workpiece and rotate it 360° during machining by the HHV’s three axis horizontal milling spindle. As each section of the part is machined, the chucks operate together to pass additional material into the machining zone, repeating the process until workpieces up to 18 m (60 ft) long are complete.

It was a sizable change for Stafiej and the Sonaca team. Project manager Christian Caron says Sonaca has historically had no problems attracting talented machinists and programmers, but the new machine still presented some learning curves. “Montreal is the third largest aerospace cluster in the world. There are 40,000 workers in the area, and roughly 235 companies. There’s a great pool of resources, so the manpower side of things has never been a challenge. But in this particular case, it’s not like there are people all over the place that know how to program an extrusion mill. We had to learn most of it on our own.” 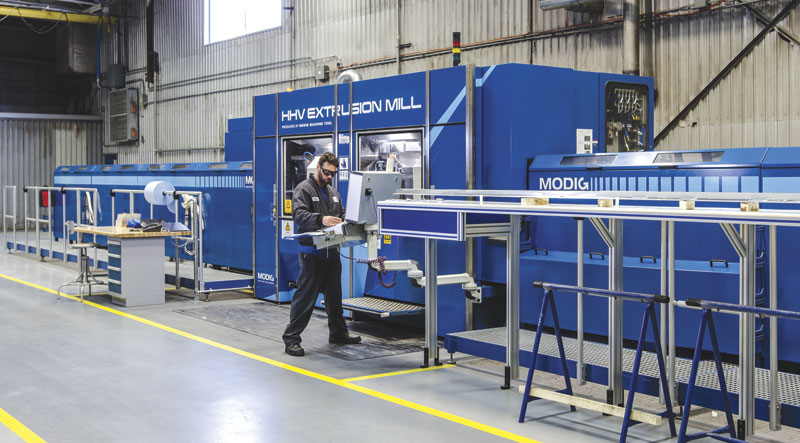 The machine was installed in July of 2015, with the goal of having it operational by year-end. Caron flew to Sweden for training. Upon his return, the first project was waiting for him, a set of 13 stringers for a new wing program. Each part took roughly one week to program and verify, much of that time due to the stringent requirements of the aerospace industry.

Caron and his team also had to learn how to set up new tooling. Because the Modig’s spindle rotates at nearly three times the rpm of Sonaca’s gantry mills, toolholder balance was a concern. To make the most of the available spindle speed, the company decided to invest in shrinkfit toolholders and a balancing machine. There were also some challenges with how to process parts. Used to programming a gantry mill, where the workpiece is supported along its entire length, Caron says he has to pay close attention to the distance between the Modig’s two workholding spindles—if they’re too far apart, or feedrates too high, workpiece vibration may result.

The right decision
“It was a good challenge, but we made it,” he says. “The biggest hurdle for us was getting to know the capabilities of the machine, and the correct programming methodology. But working with the people from Modig, and our simulation software vendor CGTech, we were able to complete all of the parts by Christmas.”

Paul Stafiej says purchasing the Modig was the right decision for Sonaca. “For stringer work especially, the extrusion mill is far more efficient than our gantry machines. On a gantry, you need some pretty elaborate tooling, and you can’t mill all the part faces in a single setup. You have to work around the clamps, and when one section is complete you have to stop, flip the workpiece around, and clamp it again. Granted, the Cincinnati gives us three parts at once, but the handling is very time consuming. With the Modig, raw material goes in one end of the machine, and finished parts come out the other.”

Stafiej says the new machine has generated a lot of interest, so much so that Sonaca has already won three new stringer programs as a result of its purchase. He says laughingly, “being responsible for business development, it’s made my job a lot easier. There are only so many wing panel programs out there, and we already had most of them. We really needed to add a new capability to the operation, one that would allow us to market ourselves better and possibly open the door to different kinds of business. The Modig did that for us.” SMT