Micromachining is a big business that’s only getting bigger.

Here are three keys to success in an increasingly competitive field

It’s an ambiguous term, but many in the manufacturing industry define micromachining as the milling or turning of parts and part features smaller than 3 mm (0.118 in.). Others disagree, saying that micromachining is used where micron-level part tolerances are involved. Still others suggest it requires cutting tools no larger than 0.38 mm (0.015 in.) in diameter.

Technically, they’re all wrong — micromachining is the process used to manufacture micro-electromechanical systems (MEMS) and other microscopic devices from silicon. There’s no actual machining involved, and in the case of surface micromachining, the process is as much additive as it is subtractive.

Technicalities aside, micromachining is essentially the making of very small parts. Easy, right? It could be a tiny watch stem or gear, a high-speed stamping die for miniature electrical connectors, a mould cavity for contact lenses, or stents and other surgical tools.

The right CNC machine
It’s this last example that Slawomir “Sal” Swierczek, assistant sales manager for Kitamura Machinery of USA Inc., will tell you is the micromachining prevalent among medical component manufacturers, and that success in this highly demanding industry begins with the right machine tool. For this job, Swierczeksays you don’t have to look further than Kitamura’s MedCenter5AX five axis vertical machining centre.

“We introduced the MedCenter5AX two years ago with a 40-tool ATC and optional 12-pallet system,” he says. “Our goal for this market is to make sure that customers can set up a variety of different parts and transition between them without delay,” he says, adding that this is achieved through a quick-change workholding system that is repeatable and practically eliminates downtime for each setup.

Swierczek is quick to point out that, despite its name, the Medcenter5AX isn’t limited to medical components. With travels of 254 x 330 x 330 mm (10 x 13 x 13 in.) and a work envelope that can accommodate parts measuring up to 220 mm (8.7”) in diameter x 175mm (6.9”) tall, the five axis simultaneous CNC machining centre is suitable for defense work, aerospace, mouldmaking, hard milling, and more. “It’s like buying a Ferrari,” he says. “You can take it to the speedway and break 200 miles an hour, but it’s still good for cruising around the city. It’s just a great machine with a small footprint, blazing speeds, high accuracy and a relatively large work envelope for its size.”

When it comes to micromachining, the MedCenter5AX checks several boxes. The 30,000-rpm spindle generates sufficient cutting speeds for smaller cutting tools, while an HSK-E40 interface provides the required rotational balance. It also boasts full-stroke positioning accuracy of ±0.002 mm (±0.000079 in.) and repeatability of ±0.001 mm (±0.000039 in.), both of which are essential when machining Lilliputian parts and part features.

The right CAM system
Don Davies, vice-president of DP Technology, developers of ESPRIT CAM software, concurs with this last point. “All CNC machine tools are limited as to the minimum movement they’re able to make,” he says. “So if your CAM software—or more accurately, its post-processor—outputs segment lengths smaller than the drive system is capable of, the control will generate an alarm, or in some instances, the machine will simply not perform as expected.”

Somewhat surprisingly, it’s this second part—the post-processor—that’s most critical in this equation. Davies relates a story where an applications person he worked with was disparaging a well-known brand of CNC control for its inability to achieve the necessary precision during a micromachining operation. As it turned out, the fault lay with the post-processor, because the person who developed it was unaware that there are specific G-codes needed to turn on the high-precision function for that control. “That’s why I tell people that you can’t separate the post from the CAM software, no matter what you’re machining. If you do, you often end up with a dysfunctional situation.”

He notes as well the need for a certain level of micromachining expertise, regardless of the CAM software and its post-processor. “I’ve seen some mouldmakers, for example, who can do absolutely beautiful work with a lower quality programming system, and vice-versa,” Davies says. “There is a certain amount of knowledge that resides within the part programmer’s head, and it’s this secret sauce that’s often the most important aspect of any machining application, micro-sized or not.”

The right cutting tools
Lastly, don’t forget the end mills and drills. David Casey, supervisor for Industrial Medical Solutions at Mitsubishi Materials USA, suggests that there’s no shortage of cutting tools for shops engaged in small parts machining, which he describes as being about 3 mm and smaller. “It’s all relative, of course, because everyone has their own definition of micromachining, but we offer a variety of small endmills for machining a wide range of materials,” he says. “This includes our Diaedge and Moldino brands, with specific products for medical, mouldmaking and other industries.” 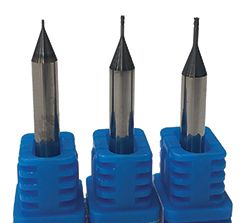 The geometry of these cutters isn’t all that different from that of their larger counterparts, with variable helix angles and variable pitch flutes, as well as coatings designed for cobalt chrome, titanium, tool steel, and other demanding materials. What’s different is the application of such tools—Casey recommends an easy-does-it approach when using cutters the size of pencil lead.

“Some people try applying the high-efficiency milling strategies that have become quite popular over recent years, but when you’re talking about extremely small tools like this, the slightest amount of radial pressure might be enough to snap the tool,” he says. “Granted, it depends on the actual application, but instead of machining along the entire flute length like you would do with a 12 mm end mill, for example, you might need to take a series of cuts using smaller step-downs and shallower depths-of-cut. That said, you still need to keep continuous engagement on the tool, or you can end up work-hardening the material. You should also turn off the high pressure coolant because this alone is enough to break a tiny drill or end mill. And check your surface speed calculations. You might need to invest in a speeder head or air-powered spindle to achieve the correct operating parameters.” SMT