One of the critical measurements of machine shop productivity has always been equipment uptime, and in recent years that factor has been dependent on improvements that amount to a few minutes or even seconds.

In large production shops making long runs of metal and composite parts, the difference of making tool changes alone can add up to hundreds of thousands of dollars annually.

One of the milestones in improving machining uptime was achieved in the 1990s with the advent of the Coromant Capto quick-change tooling system by Sandvik Coromant, which resulted in up to a 25 per cent increase in productivity. 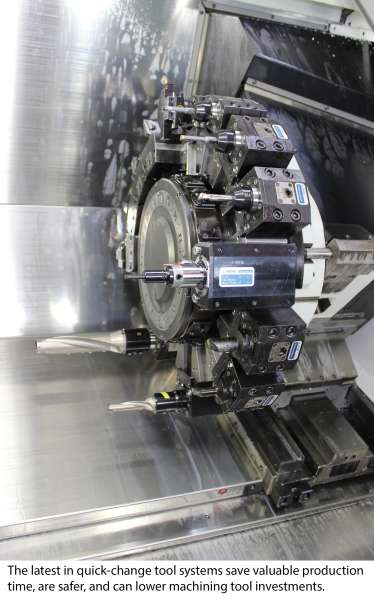 More modern tooling is now taking those gains and reducing change time even further, taking tooling changes from minutes down to seconds.

“One of the major factors behind our decision to incorporate the quick-change system is our goal of improving setup time,” explains Jimmy Lytle, president of Daystar Machining Technologies, Inc. (Fletcher, NC), a job shop with state-of-the-art CNC turning and milling centres. The shop focuses on precision machining and fabrication with quick turnaround for short-run, prototype, and specialty-part production. “Now our setup time has been reduced from minutes to seconds.”

Today, making quick tool changes and improving tooling life continues to be a priority among production machine shops as well as job shops everywhere. Not only is the saving of setup and changeover time increasingly valuable to them, but also important are the flexibility and stability of the quick-change system, as well as the potential for reduced capital investments in tooling.

One approach is the Benz Solidfix system, a versatile, modular quick-change collet system that enables machine operators to perform setups and changeovers in speeds of 15 seconds or less.

“We have quick-change adapters on all the live tooling for those lathes,” Lytle says. “We can set the adapters out on the work bench and get everything ready for a setup. Then we are in and out of the machine very quickly.”

The adapters to which Lytle refers are a central advantage of the Benz Solidfix quick-change system. Adapters are attached to individual tools and are quickly and easily inserted into a head via a bayonet-type mount that is then secured by simply turning a single nut using an Allen wrench. Various popular soft tools, such as live turrets, angle heads and static tools, can be interchanged with different size adapters. The system will fit older machining equipment as well as newer models.

With conventional tooling, when shops finish a run they have to take out their driven tools, remove and clean the collet–a relatively cumbersome operation requiring the use of two hands and multiple tools–then install the new tooling and take offset measurements. All of that can easily take two or three minutes.

Using the Benz Solidfix system, operators don’t have to remove the main tooling unit itself; they simply change the adapter, which holds the pre-measured tool. This also means that the machine shop doesn’t have to buy as many live tools, which are expensive by themselves. All they have to do is buy quick-change adapters.

“We are able to switch from a collet chuck to a shell mill adapter to a solid end-mill holder without having to change to a different live tool holder for every application,” Lytle explains. “Using this quick-change system, we have one somewhat expensive tool holder and everything else is fairly inexpensive, which gives us a great deal of versatility without a major capital investment.”

Large and small shops can reduce the number of live tools or angle heads using Benz’ quick-change tooling system, as the spindles can be changed from ER collet to mill arbor adapter, wheldon or whistle notch adapter, shrink fit, and various special tooling.

In developing its new modular system, Benz took the original quick-change technology and simplified it. Instead of requiring operators to spin on and tighten tooling in the holder using a wrench, the new system requires only a simple turn of an allen wrench.

Also, in a traditional quick-change system the operator has to remove the tool, install a new tool, and then touch-off the tool to ensure the offset is correct. With the Solidfix, the operator can preset tools on a granite surface plate. When the tool starts wearing or another type is required, he simply inserts and secures the new tool.

“Essentially, they’re putting the whole tool aggregate back in, and the repeatability is so accurate they can program in what they just measured off their height gauge so they don’t have to go through that scenario of touching-off the tool, and then programming the offset,” explains Mike Starnes, Benz sales application engineer. “So, it is really a plug-and-play system. Operators just switch out the soft tooling, and they’re all set.”

An added measure of safety

When operators try to work quickly on a traditional setup, they can be exposed to injury,” Starnes explains. “Normally, the cutting tool they are removing is very sharp. Even if it’s too dull to accurately machine a part, it’s still very sharp to the human skin. If the operator gets cut while handling one of those tools, the wound could be deep enough to require stitches. So, even highly experienced operators have to be very careful when handling cutting tools. When these mishaps occur, they have to go the nursing station and at least get the wound cleaned up. In more serious cases, they may have to go offsite to a doctor or even the hospital. Of course when such injuries occur, even more production time may be lost.”

Starnes adds that with the Benz Solidfix system, operators are performing a much simpler task, which in most cases can be performed using one hand. Because of the ease of mounting and securing the adapter and tooling, exposure to potential injuries–and loss of operator time-is minimized.