Thick packets of work instructions, job travelers, tooling lists and part drawings are a common sight in most shops. Everyone from the receptionist to the head engineer participates in printing this small forest’s worth of paper, while operators and quality control people struggle to make heads and tails of it all. Then along comes an engineering revision or customer change request and everyone runs around like chickens with their heads cut off, swapping paperwork and redlining drawings. There has to be a better way.

Machine builder Haas Automation Inc., Oxnard, CA, once struggled with the same problem. Think about everything that goes into machining and assembling the thousands of components needed to build a CNC machine tool and you’ll have some feel for the magnitude of the problem. Jeff Law, manager of manufacturing engineering, says it’s nice to help the environment, but the company’s move to paperless was purely pragmatic. 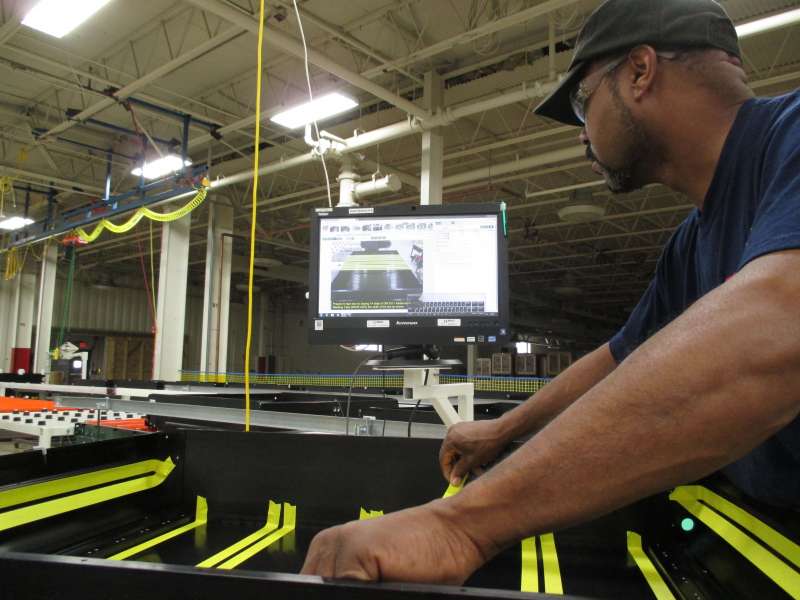 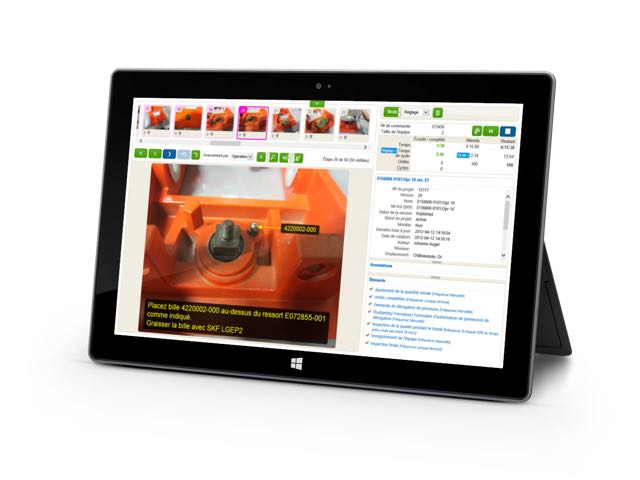 “We have a team of around thirty manufacturing engineers,” Law says. “A big part of their job is to create and maintain our procedures, of which there are thousands. When all this stuff was on paper, we had Word documents all over the place. As the company grew, there was so much paper floating around that the whole system became too unwieldy to manage. We ended up re-documenting the same procedures multiple times just because no one could keep track of the changes.”

Before the paper chase got too out of hand, Law got with the IT team at Haas and began building a better mousetrap. Using Drupal, an open source content management system (CMS), the company developed its own internal website, then created an iPad app linked to that site. Whenever a job is released to the floor, a single piece of barcoded paper goes with it. The operator scans the barcode and the iPad displays the work instructions associated with that job. Law says document revisions are flagged automatically, and a stripe on the document hyperlink indicates to the machinist or engineer that something has changed. “It’s a million times better than it once was,” says Law.

Another company that’s going sans paper is industrial gas supplier Praxair Inc. Charles Catron was once an IT manager at Praxair, but has since left to open his own manufacturing consultancy, Advent Solutions Co. in Noblesville, IN. While working at Praxair, he took an approach similar to Haas’s, creating a master PDF job document that contained barcoded hyperlinks to the appropriate documentation. Catron explains that it wasn’t all that difficult to do, once you knew the network locations for all the different files, but that upper management can be a roadblock to change when implementing a project like this. “On the surface, it’s might seem tough to justify,” he says. “Paper and ink cartridges and such don’t cost all that much, so it’s important to point out the less tangible benefits if you want to get everyone on board.” 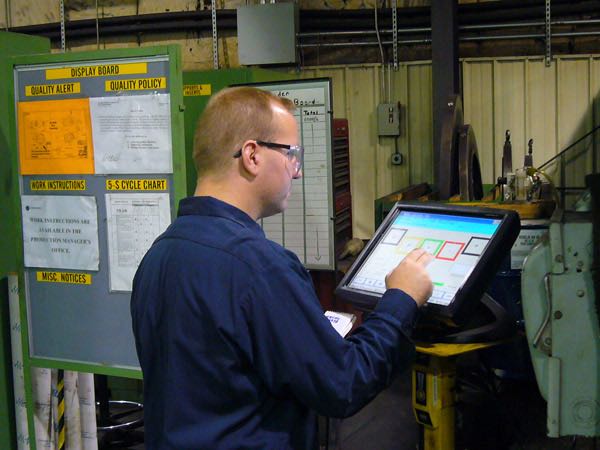 According to Catron, those benefits include easy accessibility of shop floor documents, no time lost tracking down obsolete revisions, the ability to include movies and other forms of visual documentation, recording of electronic signatures and quality metrics, mobile applications, simplified archiving, more secure storage…the list goes on.

Kyle O’Reilly agrees. As sales and marketing manager for Visual Knowledge Share Ltd. (VKS), a work instruction software provider in Chateauguay, QC, O’Reilly says paper in today’s high tech environment is like using your arm to wipe the snow off a car. “It works, but it’s tedious. You’re throwing paper out left, right and centre. There’s no rev control, so you end up with outdated documents on the floor. And a lot of times, people don’t even open their paper documents, relying instead on historic job knowledge. It’s just not very efficient.” 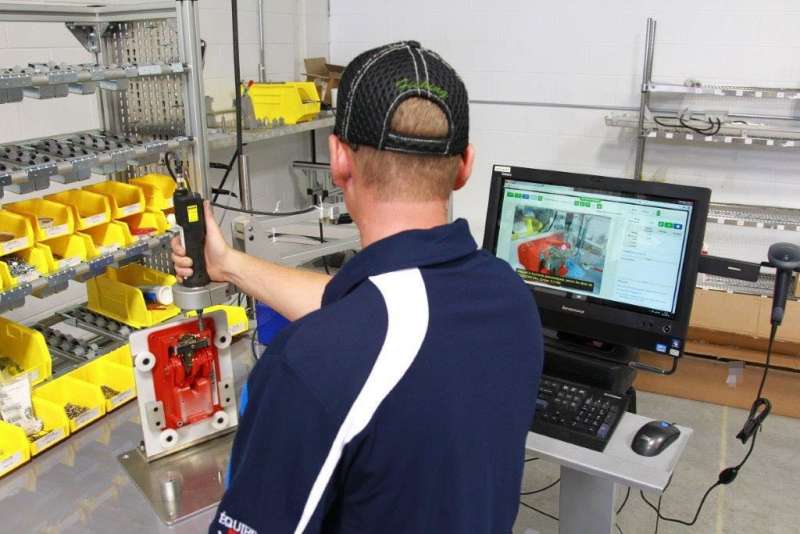 He should know. VKS is the brainchild of Steve Zimmermann, president of fabrication company CMP Advanced Mechanical Solutions. Prior to developing its own in-house solution, CMP was dealing with the same situation faced by many manufacturers today: too much paper. Around seven years ago, Zimmerman had had enough. He put together a solution, tested it on his own shop floor, and quickly realized the software would be beneficial to other manufacturing companies, not just his own. A few years later, Visual Knowledge Share was born.

O’Reilly describes VKS as a browser-based application, one that allows companies to quickly and easily create work instructions. “The problem with using Word or Excel for making work instructions is that it’s not designed for that,”says O’Reilly. “Shops need a solution that lets them standardize their documentation, using a tool that drives them step-by-step through the process. They can capture text, images, and video, and stream it to the shop floor, where operators can then interact with the information provided to them.”

Inspection results and production data are collected, and operators are prompted through the different manufacturing steps. “It eliminates the dependence on tribal knowledge, while promoting accountability and traceability,” he says. “And if there’s a problem, management can be alerted to it right away, instead of finding out after the job is done.”

“Investment in a good shop floor management system helps manufacturers get more business and grow.” That’s according to Richard Deeran, vice-president of sales for Casco Development Inc., Portland, ME, the provider of ShopVue, a manufacturing execution software (MES) system. Deeran says the company’s paperless concept started in the early ‘90s, but was slow to catch on at first. “Now, it’s pretty much what everybody wants.”

Systems such as this eliminate the Monday morning huddle, Deeran explains, and get rid of the whiteboards. “You go to Burger King and there’s a screen that tells the kid working the grill what to do next and how to do it. This is the same idea. There’s no more chasing down the supervisor for instructions. The operator simply agrees to the next order in line, and with one click can see all the drawings and documentation needed to do his or her job. It makes life simpler for everyone.”

It’s clear that going paperless can revolutionize the shop floor, whether it’s a hyperlinked document strategy on an iPad or a complete MES system that’s been linked into the company’s supply chain software. Be prepared to spend some money, however. A basic cloud-based system can be rented for a few hundred dollars per month, while a full-blown software package can easily cost $100,000 or more. If that’s too steep, there’s always the homegrown approach, but managers and business owners should realize the time spent by in-house talent isn’t free either, and there’s always the risk that your developer might move on at some point, leaving ongoing support and future development plans in limbo. Whichever way you go, electronic documentation makes good financial sense. It greatly reduces mistakes, improves quality, and preserves historical information through version control. Best of all, it protects valuable natural resources. Maybe it’s time to ditch the paper.