Automating CNC machine tools has not only become more necessary, but much easier as well

Implementing an automated CNC machine tending solution has historically been a complicated task. There were conveying systems and safety barriers to consider. Fixtures were needed to get raw material lined up just right. Shops had to fine-tune machine interfaces and end-effectors, and when all was ready, adopt robot programming languages alien to those familiar with G and M codes. Unless orders were for parts by the tens of thousands, many wondered if it was worth the effort.

Get going
That’s all changed. Where finding skilled labour was already a challenging task, it’s become even more so thanks to the pandemic. Add the relentless pressure for job shops and OEMs of all sizes to increase OEE levels (overall equipment effectiveness and you will see there’s more reason than ever before to make your CNC machinery as self-sufficient as possible.

Here’s the good news: this seemingly daunting undertaking is now no big deal. Thanks to a host of almost plug-and-play automation systems, marrying a robot to a CNC lathe or machining centre has become no more challenging than installing a barfeeder or pallet changer. What’s more, the lead-times for these systems are best measured in weeks rather than the months, with installation and training completed in just a few days. 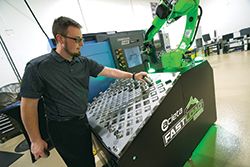 One such system comes from Gosiger Automation, a machine tool solution provider that has partnered with robotic specialist Automation Within Reach (AWR) to produce the Load and Go family of turnkey automation systems. “We have two versions, each available with three different robot options for lathes,” says Greg Feix, Gosiger’s vice president of sales. “The DC series is a drawer-style system, while the RC takes a rotary table approach. Both work on any brand of CNC lathe, both are equipped with adjustable workholding trays, and both provide an easy-to-use, low-cost, low-risk way for manufacturers looking to get into automation.”

For vertical machining centres, Feix points to the VBX-160. Rather than drawers, this system uses adjustable shelves to position raw material and finished parts. And the company’s patented MultiGrip workholding allows manufacturers to run multiple operations on up to eight different workpieces concurrently. “The robot processes Op. 10 and Op. 20 on the first job, changes the program, swaps out the machinable top jaws which double as the robot end-of-arm tooling, and moves on to the next part,” he says. “It’s designed specifically for high-mix, low-volume work.”

There’s also the FastLoad CR2000, which uses a Fanuc CR-15iA cobot (collaborative robot) rather than the traditional (and admittedly faster) industrial robot found on most similar systems. It boasts an adjustable workholding tray, where the DR2000 requires drawer-sized, machinable templates to position workpieces. Like the Load and Go from AWR, both support multiple machines with a single robot.

“We’re seeing a lot of activity here because the delivery time is very attractive, as is the DR’s small footprint,” Morgan says. “We’ve installed quite a few of the collaborative systems as well, but they’re a bit more restrictive regarding part shape. The stock has to be round or square, and there are some limitations as to the part geometry it can grip post-machining.”

The fine print
Caveats exist with any of these systems, albeit small ones. Regardless of the brand or type of robot, automation providers recommend that shops undergo a safety assessment before investing in robotic part handling. Morgan notes that even cobots can pose a risk to nearby humans when handling sharp workpieces, although numerous guarding options are available. These include traditional fencing and laser-based area scanners, each with pros and cons that manufacturers should discuss with their provider.

These solutions require Ethernet connectivity to the machine control, an option that may not exist on older machines. In this instance, it’s usually easy to wire-in an aftermarket Ethernet adapter. “We also recommend an automatic door opener,” he says. “Some have asked about using the robot for this, but it creates unnecessary wear and tear on the grippers, as well as potential chip problems with the door that, over time, the robot may be unable to overcome.” 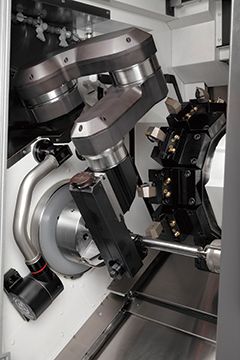 Meet Roid
For owners of equipment from Okuma America Corp., product specialist David Fischer says two recently introduced automation options are available, both were slated for unveiling at IMTS 2020 before the show was cancelled. The Standroid is a standalone automation cell not unlike those described above. The key differences are that it can only be used with select lines of Okuma brand lathes and machining centres; it is integrated directly with and controlled from the OSP control, and; is completely enclosed, eliminating the need for external guarding.

The same arguments can be made for the second new product, the Armroid, a robotic arm designed for Okuma LB3000 EX II lathes and Multus B250II series multitaskers. The Armroid is mounted above the spindle directly behind the left firewall. When equipped with a gripper and removable material stocker—which sits in front of the lathe just to the left of the operator door—it loads and unloads material much like any other machine-tending robot. But here again, because the robot works entirely within the confines of the machine enclosure, there’s no need for guarding.

“The Armroid can also be used with an auxiliary coolant nozzle that blasts air and cutting fluid at the work zone to remove chips, or as a work support to suppress chatter on long workpieces,” Fischer says. “The system switches between these functions automatically based on commands from the machine’s OSP control, so there’s no need for the operator to pick up another programming language. And because it’s an integral component of the machine tool, we’re able to provide collision avoidance, just as we do on some of our other equipment. All in all, these are all unique solutions given the industry’s need for flexible, cost-effective automation. SMT