Ontario: The Spice of Life

Precision metal fabrication is rewarding work, but governments could be helping a lot more

Define Metal Fabrication owner and president Michael Grieger founded the company in 2011 after he was downsized from the fabrication company he had been with since starting his career. He also spent some time teaching metal fabrication at Durham College in Oshawa, Ont.

Define Metal’s biggest customer is in the marketing and product display market, and almost half of Define Metal’s work is on displays for high end cosmetics. “We work with the awareness that the general public will be interacting with our products,” Grieger says. “That means making sure all the edges are well deburred and that kind of detail.” Define Metal does shelving and displays for a range of other retail-oriented customers.

But variety is the spice of life, and one of Define Metal’s other major customers couldn’t be farther away from the fashion and retail sphere; it’s a finishing company that refurbishes vessels for the Canadian and U.S. navies.

“We’ll take in airway frames and air hatches and work with our customer to rebuild them,” Grieger says. This involves cutting out the existing louvres that may be damaged or rusted and replacing them with stainless steel louvres and chevrons to original specifications. Then they’re shipped back to Define Metal’s customer, which applies proprietary coatings to restore the components to original equipment standards.

Another line of work is supplying galvanized steel wall systems to a customer who builds prefabricated wall sections for hospitals in its own factory. Prefabrication of building components– sometimes entire rooms–is one of the latest trends in construction and Grieger is happy to have a foot in the door.

“It’s a very interesting line of business. We bring the material in, we’ll either punch it or laser cut it and bend it, and most of the time it goes out the door as a finished product–there’s no further finishing required.” Some other work for the same customer involves stainless steel work where Define Metal will weld and polish an enclosure, again winding up with a finished product.

One of Define Metal’s workhorses is its AccurMax AM2258 Ultra CNC turret punch press, which Grieger acquired new two years ago. The AM2258 really shines where a lot of straight edges are involved, as in the wall system work. 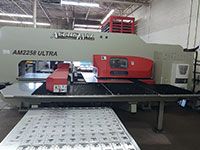 When it comes to more complex shapes, Grieger knew he needed to up his game, and at the beginning of the year he brought an HK FS3015 25 kW fiber laser on board.

“Designers long since threw out their straight edges,” Greger says. “Everything now has curves and angles and so on, which makes punching more of a challenge.” With the turret punch press, radii and arcs have to be nibbled, which isn’t as convenient or efficient and leaves a burr and a sharper edge.

The laser is also more efficient for the large amount of prototyping and low volume work that Define Metal gets, where the potential cost of the assist gases doesn’t add up as it would on high volume jobs. “The upside with the laser is that you don’t have tool changes,” Grieger says. “You import your DSX file, and from there you make a basic change or adjustment in the cutting head to suit the material that you’re cutting, and you’re away to the races.”

When you ask Grieger what his biggest challenge is, of course he mentions the difficulty of finding skilled labour, as so many shop owners do. But he is especially frustrated by what he sees as an indifferent attitude to businesses like his from the public sector.

“Running a manufacturing business in southern Ontario, I can’t help but feel that all levels of government, municipal, provincial and federal, have really abandoned Canadian manufacturers. They just don’t support small and medium-sized businesses the way they used to.”

Grieger would like to see some relief on taxes, and more in the way of financial help with machinery and equipment purchases. But it’s apprenticeship in particular that frustrates him.

“I’ve heard so much about supporting apprenticeships, but I don’t see it happening. Every politician talks about it, but none of them actually do anything.”

The problem is the lack of education, Grieger says. It’s not just that trades training is frowned on in high school in favour of university preparation–a phenomenon he witnessed as his daughters grew up– but the post secondary training has withered away. The precision metal fabrication course Grieger taught at Durham College was discontinued, and he says Durham was the last Ontario college where it was taught.

“Where are you going to find people to do the kind of work I need? My only alternative is to train up those employees or poach them from competitors, which I really don’t want to do. I’m left to my own resources.”

Two years ago Define Metal hired an apprentice who had worked there in a co-op program in high school. They’re continuing to nurture his skills, but they haven’t found a school to send him to.

“It’s really frustrating. There’s just no schooling to be had. We have yet to find the answer.”

That frustration aside, Grieger has had the satisfaction of seeing his two daughters join the company, the elder in an operational role, and the younger one, who has HR training, handling a number of roles including accounting.

And the workday of a precision metal fabricator is full of variety, which Grieger says is what keeps him coming back.

“I try to keep things diverse, so that if there’s an economic downturn, one sector may be down but another one will be picking up. As a result, we cater to many different industries. There’s never a dull moment.” SMT