Canada’s resource sector, which includes what are called “primary” industries, has been an important backbone of the Canadian economy for more than 100 years. However, industries such as mining, agriculture, forestry, and even oil and gas, have been criticized for lacking in innovation and investment. As commodity prices have softened, the road to success in this market will be open to those companies that can help their customers do more with less. This will be particularly true in mining.

“We see cost pressures caused by lack of new discoveries, lower grades from mines as higher grade ore is mined, and general cost inflation,” says Glenn Ives, chair of Deloitte Canada in Vancouver, BC. “This will cause mining companies to become more innovative.”

From a job shop perspective in the resources sector, innovation can take many forms, but it is highlighted by a requirement that products and services be delivered to where the client does business. That means being able to manufacture and maintain equipment that is being used in harsh conditions–in Canada and abroad. And all of this has to be done in an environment where capital purchasing is under pressure.

“When we look at the technology spend in Canada, primary industries will have a slightly negative five year compound annual growth rate [CAGR] of -0.3 per cent, dropping from $1.55 billion in 2014 to $1.53 billion in 2019,” says Nigel Wallis, research director for vertical markets and new initiatives at research-firm IDC Canada. “And computing hardware actually has a negative five year CAGR for primary industries, at minus 3.5 per cent.”

That hardly looks like a sector that is embracing innovation. With equipment purchases under pressure, the resources sector will be looking to drive more value out of the machinery and parts they already have. In agriculture, for example, Deere & Co. expects to see a 20 per cent drop in farm machinery sales in 2015, with the IBISWorld Tractors & Agricultural Machinery Manufacturing market research report stating that in Canada “slumping crop prices and reduced purchases will reduce revenue.”

That may not seem like good news, but it can spell opportunity for those companies involved in maintenance, repair, and operations (MRO). As well, getting your foot in the door to help resource companies keep their operations going could spell greater opportunity when things turn around, as they will.

“Primary industries, reflecting the contraction in commodity prices and the drop in the price of oil, will be in negative territory in 2015,” says Wallis from IDC. “But they will recover to 2.5 per cent growth in 2019.”

Forestry is one area where there is more innovation than many realize. The industry, which employs 200,000 Canadians, is embracing value-added products and more efficient, sustainable practices. The upshot of this is that there is opportunity for those companies active in building new machining processes, and in leveraging alternative energy. This will be true in mining as well.

“We do not believe that the recent decline in oil prices will change the general momentum to introducing more use of renewable energy in mining,” says Ives from Deloitte. “As well, leading companies continue to look at new technologies, such as nanomaterials, 3D printing, modular design, robotics, bioengineering and alternative haulage, in an effort to further improve operational performance.”

The price of oil is the elephant in the room when it comes to addressing Canada’s resource sector. On the one hand, the drop has sucked a lot of money out of the economy, but on the other, it has lowered operational costs for energy intensive industries such as mining and forestry. Analysts see the sector as having bottomed out, though they aren’t anticipating strong growth in the near term. 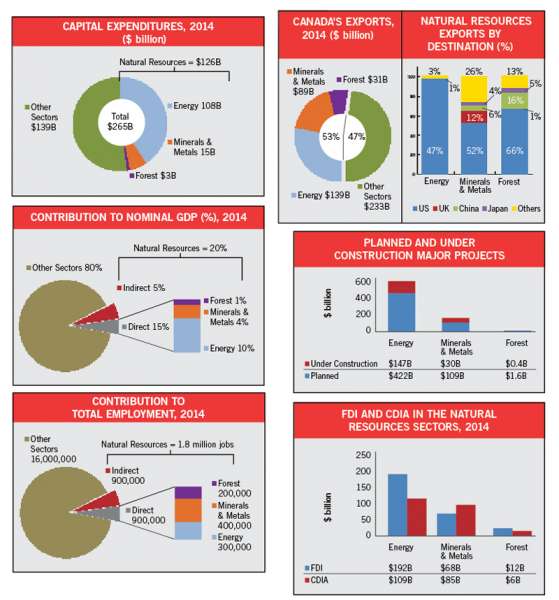 “After closing 2014 with commodity prices hitting four-year lows, by the summer of 2015 there were broad-based increases, suggesting that the market has bottomed,” says Wallis from IDC. “Nonetheless, central bank support has been unable to bolster sluggish growth in advanced economies and the slow-down in China.”

With the Bank of Canada having dropped the benchmark overnight rate to just 0.5 per cent, and the US expected to raise rates later this year, the Canadian dollar will stay under pressure. That might provide a boost to the domestic resources sector, which contributes on average about $26 billion per year in revenue to municipal, provincial, and federal governments. It also might increase consolidation in the mining sector.

“Mining companies have always tended to purchase properties that are further along the development curve, as it reduces their risk, such as with Goldcorp’s acquisition of Eleonore, and HudBay’s acquisition of Constancia,” says Ives. “I believe this trend will continue as companies continue to reduce their project risk by purchasing more advanced projects.”

When seeking opportunity in the resource sector–particularly if you want to establish a longer-term growth plan–it makes sense to assess the intentions of the dominant companies. Canada ranks among the top three global producers for softwood lumber, wood pulp, uranium, aluminum, and platinum. We are also the global leader in the production of potash and newsprint. Finding the major players, and assessing how innovative delivery of products and services can improve their business, is a good way to get your foot in the door. And once you’re in, you’ll likely be able to stay a while. SMT