Getting employees lined up with the right skills to get the most out of today’s advanced machining technology can be a challenge.

In Canada, there is strong regional support through community colleges and apprenticeship programs. But is that enough?

“There is a missing element,” says Les Payne, executive director of the Canadian Tooling and Machining Association (CTMA) in Cambridge, ON. “In Canada the government does not directly fund on-the-job training.”

From Payne’s perspective, direct funding to companies who are doing the work makes sense.

“Colleges should be supporting training,” he says, “not leading it.”

But an overview of skills training and the colleges who provide it, as well as apprenticeship programs, suggests that Canada has a number of regional programs that are making a difference. 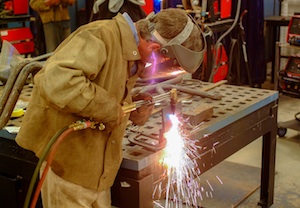 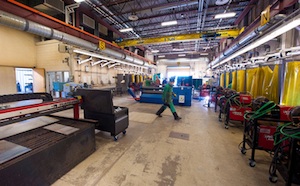 That’s a hefty number, but welding is not advanced CNC machining. In time, some of these workers might acquire machining skills. In Alberta, most apprentices who enter their first year of training are only 20 years old, suggesting a quick pass-through from secondary schools to community colleges. None of this works, however, if the candidate doesn’t have a job first.

“Apprenticeship programs in Alberta require a student to secure employment prior to attending post-secondary studies,” says Bourke, who is based in Edmonton. “They spend 80 per cent of their time learning on the job and 20 per cent at a post-secondary institution.”

That means to start working in Alberta you must first be an apprentice or journeyperson. To get youth started early, Alberta’s Registered Apprenticeship Program (RAP) allows students to start while in high school, earning hours toward their journeyperson certificate and high school diploma at the same time.

“About 1000 Albertans become RAP students each year,” says Bourke, who emphasizes that helping youth transition into post-secondary studies, pre-employment programs, and even online programs will continue to be necessary to meet industry demand.

On the other side of the country, Nova Scotia Community College (NSCC) sees itself as filling an important gap between what the government and the private sector can provide. When it comes to machining skills and certification, this is crucial.

“We have a really good relationship with the province,” says Kevin Gerrior, who manages the apprenticeship program at NSCC. “They work with employers to sign up graduates as apprentices, who then come back here to complete their training.”

Nova Scotia appears to be heeding some of the advice proffered by Payne from the CTMA.

“Nova Scotia has an employer incentive grant to hire apprentices,” says Gerrior. “The province will write a cheque with specific amounts for first, second, third and fourth year apprentices.”

And because the government is involved, it has a large mandate to represent opportunity for the entire population. Machining is a little different from other trades in that it is chock full of white men – well under 50 per cent of the available workforce. Not to reach out to other demographics is a missed opportunity.

“In metropolitan areas like Halifax and Sydney women are under-represented,” says Gerrior. “And, overall, Native and African-Nova Scotians are also under-represented. Getting these populations involved helps spruce up the programs, and entices employers to hire from scratch.”

This isn’t charity. Canada needs more skilled machinists. Nova Scotia, in fact, is working out its strategy by following the advice offered by private sector councils.

“In the machining sector, we have industrial and mechanical engineering programs that feed into industry demand,” says Gerrior.  “A few years ago industry was complaining that they wanted more focus on metal fabrication, and we responded with a more robust training and certification program.”

Indifference on the part of industry can have dire results, just as a proactive role can turn things around. A few years ago the NSCC was facing declining enrollment in its CNC and machining programs. Few graduates were going out, and fewer apprentices were signing up.

“It was almost fizzling, so we suspended the program,” says Gerrior, “Industry was in an uproar. But then they banded together, brought the province to the table, and formed the Machining Association of Nova Scotia (MANS).”

MANS is specifically mandated to improve apprenticeship training and pre-employment programs associated with the machining trade. Training must still dovetail with certification, but it is really industry demand and guidance from organizations like MANS that sets the stage.

“If there is a certification that exists, we want to attach our graduates to it,” says Gerrior. “So, we still want Red Seal, but industry has to align itself.”

And industry has to get organized. Often, industry members aren’t able to provide government and educational institutions with an overall demand profile for manual operators, numerical control operators (NCOs), and full-on CNC machinists. Assessing demand is essential to get the training right.

“Everyone is talking about skills shortages right now, and the move to a knowledge economy,” says Payne from the CTMA. “The politicians are aware of the issue, and of the need to increase skill levels.”

And with big markets like Ontario boosting capacity–the province has at least seven colleges offering machining training–young students have an ample number of programs to choose from. That’s good news, because it means that young Canadians from across the country can now get the training they need closer to home.

One big challenge Canada faces is that although industry may be the source of knowledge with regard to training demand, it does not necessarily have the internal competencies–or organizational structure–to support rigorous training programs on its own.

“CSTD members come from virtually all industries and sectors,” says Danielle Lamothe, Director of Professional Services at the Toronto-headquartered Canadian Society for Training and Development (CSTD).

However, the CSTD, which brings together training practitioners to solve organizational challenges, is notable also for its modest representation from within the manufacturing sector.

Lamothe emphasizes that the CSTD has more of a strategic, organizational focus.

“In all sectors, it is clear that an understanding of the business is key to developing training interventions that help organizations achieve their goals,” says Lamothe. “People are at the heart of any training intervention; the topic of the training itself can cover any subject that is crucial to the workplace in question.”

But when one looks at the CSTD’s membership, there is clearly a lack of representation in manufacturing. We see big resource industry names like Diavik Diamond Mines and Teck Coal, but there is little from major manufacturers to suggest a skills training culture is top-of-mind.

“We believe that the process necessary to develop sound training programs and learning interventions is the same regardless of the industry, sector or purpose of the training itself,” says Lamothe.

She may be right. The key is to create an integrated culture without internal disconnects. No one wants to see HR departments post requests for fully-qualified CNC machinists, when all they need is an NCO (Numerical Control Operator) that, if desired, they could train themselves. Clearly, Canada needs the private sector to look beyond governments and local colleges, with a stronger focus on building internal competencies.

“Developing a nimble, competence workforce is in the best interest not only of individual organizations, but of the Canadian economy overall,” says Lamothe.

Tim Wilson is a contributing editor to Shop Metalworking Technology.