Demand from industries that are central to Canada’s industrial and economic growth, such as aerospace and energy, has resulted in innovative new technologies that can machine very big parts.

It’s an exciting time to be in this area, with special machines from a few key players raising the bar.

“We have a machine called the DMU 600 P that is good for aerospace,” says Roberto Colombo, application manager with DMG Canada Inc., Mississauga, ON. “It can handle parts that are six metres by three metres, with weights of up to 40 metric tons.”

The DMU 600 P is certainly a big machine: it requires an area of approximately 17 metres by seven metres. It can combine five-sided and/or five axis simultaneous machining, and leverages ultrasonic technology as a standard feature, which then combines with a carbide head to offer more cutting options.

Makino is also in the game. The company’s T-series five axis horizontal machining centres use Makino’s Advantige technology, which is built specifically for titanium aerospace parts such as edge frames, pylons and bulkheads. This is state-of-the-art machining when it comes to titanium.

“These titanium components are necessary for a new generation of aircraft, such as the 787 and the Airbus A350, that rely to a large degree on composite structures,” says Mark Rentschler, marketing manager, Makino, Cincinnati, OH.

Makino’s T-series is notable for its speed, and also for its ability to hold heavy parts: the T4 can hold workpieces that are 4 meters long and weigh up to 5,000 kg. 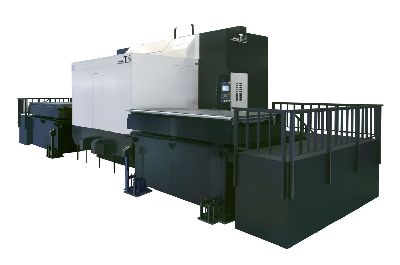 “Machining big titanium parts is a growth area,” says Rentschler. “Beside aerospace, we see demand also where corrosion is a concern, such as chemical industries and desalination plants where large valves are required.”

“As far as we know, Okuma makes more double column machining centres than any other manufacturer.  We made the first one in 1966,” says Julie Murphy, marketing manager, Okuma America Corp., Charlotte, NC. “We use them to manufacture our own machines.”

One aspect of large parts is that they are often in unusual shapes. To address this, Mazak has the Orbitec 20 for turning large, odd shaped parts which are typically not conducive to normal turning operations. The headstock can turn diameters of 508 mm on parts fitting into a cylinder up to 1,050 mm in diameter and 1,300 mm in height.

“A lot of people in the valve industry require a continuous groove from the centre of the part outward – it is used in gaskets so that there is no easy path for leakage,” says Mike Kerscher, national applications manager at Mazak, Florence, KY. “This was previously only possible in turning operations, but we are now bringing it to machining centres.”

“The Orbitec is a very new product that we are marketing around the world,” says Kerscher. “Part of its appeal is that it uses our Palletech automation system, so set-ups are immediately available. It is equipped with a standard two-pallet changer, and can combine with our Horizontal Nexus machining centres for complete large part manufacturing.”

Having the ability to machine big parts quickly presents a challenge: how to manage all the waste material.

“When you are slogging through large pieces of metal, the sheer volume of chips is daunting,” says Murphy from Okuma. “Conveyor and filtration are critical.”

“We have a large chip conveyor and flusher under the NT6600 DCG. The machine is sealed, and we are sending coolant through the spindle at 1,000 PSI. We also have internal washing.”

All told, as innovation solves many of the challenges big part machining presents – from quick tool changes, to cutting newer materials, to the ability to evacuate large volumes of chips and fluids – it is clear that increased industrial demand is spelling real opportunity for the future.

“The number of shops doing very large part machining is low,” says Murphy form Okuma. “This creates an opportunity for the shops that do this type of work.  Often they can make very good margins because they have little competition.”

Tim Wilson is a freelance writer based in Peterborough, ON.