BC job shop takes a slow but steady approach to growth

The Problem: Switching machine tool brands to save costs leads to lacklustre results
The Solution: Return to the fold with a vertical machining centre

Innovative Tool and Die Inc., Delta, BC, has been an Okuma customer for more than two decades. Owners Walter and Stieny Klomp bought the first one–an MC-4VAE vertical machining centre–in 1993, from Thomas Skinner & Son Ltd., Richmond, BC. Back then, the majority of the company’s income came from the design and manufacture of injection and blow moulds, and much of the machining was done on a German-built Deckel 1:1 3D Pantograph, which cut mould cavities by manual tracing of a pattern or cast part.

Twenty-three years later, the company is on its fifth Okuma. Walter and his wife are “mostly retired,” but still show up occasionally to bring their son and general manager Frank out to lunch, or offer a bit of business advice. And that first Okuma? It’s still in service.

Walking out to the shop floor, Frank Klomp says it’s obvious the machine is from a different era. “There’s no guarding on it like the newer machines, so it sits off by itself. It’s still making parts though, 22 years later. It’s kind of fun to show it whenever an Okuma rep stops by.”

The company opened in 1981. Walter Klomp was employed at a local tool and die shop when he and a co-worker decided they had the skills and experience to make a name for themselves and broke out on their own. The partnership didn’t last, however, and four years later Klomp bought out his partner’s share and brought wife Stieny in to run the books. Around the same time, Frank started working in the now family-owned business, and served his five-year apprenticeship under his father’s careful tutelage. He’s been managing the shop since 2004.

A lot has changed in 34 years. What started out as a shop specializing in injection moulds has since evolved into prototype and low to medium volume CNC machining. “The tooling business got pretty dire after 9/11, and slowed down again in 2008,” Klomp says. “We had a few lean years. Luckily, we had some opportunities to do some precision machining, which turned out to be a great source of work.”

In fact, that side of the business has blossomed. Where many shops in North America have closed their doors, Innovative has carved a niche doing difficult machining work, balancing that opportunity against the company’s historical demand for complex tooling. Straddling this sweet spot is what’s allowed Klomp and his team to remain active and stay in business, he says. “We still do a fair amount of mouldmaking–that’s what we’re known for. But there’s also a lot of specialty die work and tooling that doesn’t fit neatly into any specific category. We started doing more and more of that, largely because of the fuel cell industry in this area. That’s been a big driver for us.” 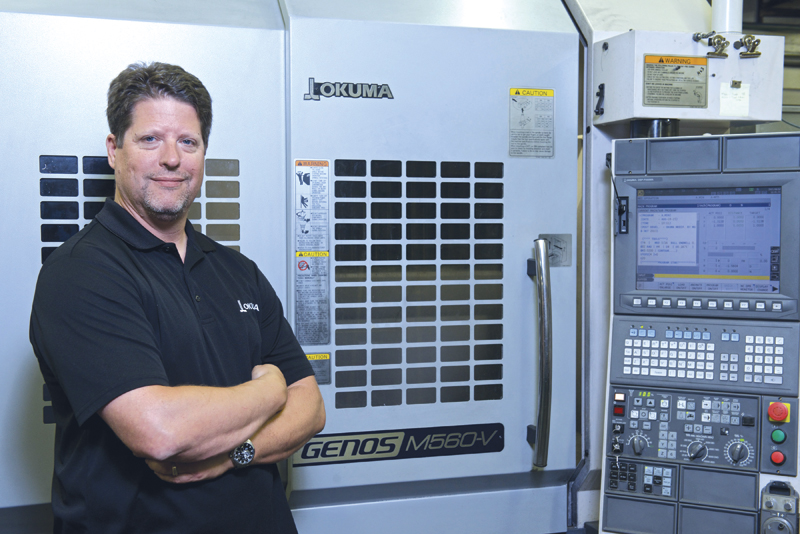 According to Klomp, the BC area is world-renowned for fuel cell development. Much of this has been funded by automotive companies such as Ford, Daimler, and Mercedes, but this work has since spawned applications for light industrial and even residential use. The result has been an agreeable mix of prototype work, tooling, and in some cases, production volumes of several hundred pieces.

Aside from the obvious revenue benefit, the evolution to light production and the influx of new customers has helped Innovative grow into a more mature manufacturing company. It’s had to adopt new quality procedures, and has learned to apply the demanding practices of mouldmaking to precision machining, something that’s been a win-win for customers and company alike.

Through it all, the shop has seen a slow but fairly regular arrival of Okuma machining centres. Klomp says the machinists have always enjoyed the ease of programming and operation that came with the machines, while he’s enjoyed the reliability. Despite this, he decided at one point to purchase a different brand of machine tool.

“There was a Japanese builder at the time that was rebranding a line of Taiwanese machinery,” he says. “It was being offered at a great price, and the control came with a 64-bit RISC processor so it cut pretty fast, even faster than our Okumas at that time. We learned pretty quickly, though, that it couldn’t take a hit. Rather than stopping with an error when an axis became overloaded, something mechanical would slip and the machine would be down. Each incident meant a call to the service guy. Compared to an Okuma, it was half the machine.”

Klomp learned his lesson. He’s since gone on to purchase an additional Okuma machining centre from Thomas Skinner, a Genos M560-V VMC with 15,000 rpm and 1050 x 560 mm (41 x 22 in.) X and Y travels. Equipped with Super-NURBS, the control supports high speed mould machining through definition of a tolerance band that creates a “best fit” curve through the intended toolpath. This produces smooth motion without sacrificing productivity and, as an added benefit, is easy to program.

He had to do some rearranging to fit the last machine in. The company’s five Okuma’s, 12 employees, and an eclectic mix of wire and sinker EDM, pantographs, grinders and miscellaneous manual and CNC equipment fit into just 700 sq m (7,500 sq ft) of floor space; Klomp and his employees refer to the back part of the shop as “Okuma Land.” Despite the tight squeeze, everyone’s happy with the new machine, and the operators have no trouble bouncing between today’s OSP control to one that’s more than two decades old.

“The OSP control is very user friendly, especially with 3D surfacing,” he says. “You give it a number: this is the accuracy I’m looking for, and the machine just does it. By comparison, we have a graphite mill with a different brand of control. When we first bought it, we had to bring someone in from Japan to tweak the parameters until we were happy with the performance. Even now, we don’t have a clue what some of those numbers mean.”

With Innovative’s product mix, efficiency is important. Klomp learned early on that a centralized programming function wasn’t going to work for them, so today each machinist is responsible for programming his or her own machine. A typical setup starts with clamping down a block of metal, programming the roughing toolpath, and starting on the next operation while the machine is cutting. Klomp admits his unorthodox approach takes a higher level of operator skill, not to mention additional licenses of CAM software, but he has come to realize it’s the best way to run things at Innovative.

“We’re a small shop. If there’s only one person doing the programming and there’s a problem, the machine has to wait while the code gets fixed. It’s simply less efficient, especially when you might only be making one of those parts. For us, it’s a matter of getting that thing cut as fast as possible. The Okuma helps us do that.” SMT