Meet the Asterix, the first large naval ship to be built in Canada in more than 20 years. The new ship, built by Davie Shipbuilding, made its debut on July 20, 2017.

Davie’s 1,369 staff together with over 900 Canadian suppliers spent just under 2 years delivering the Resolve-Class naval support ship which will enter into service with the Royal Canadian Navy by the end of this year as initially planned. 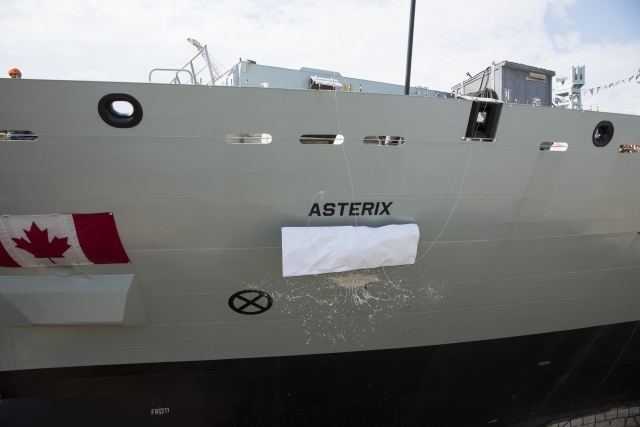 “Today is a demonstration of human endeavour and a celebration of what our team has achieved in such a short time frame,” stated Alex Vicefield, Davie Shipbuilding’s chairman during the unveiling. “With the entry into service of this first-in-class ship, we will be half-way there to fully restoring Canada’s support-ship capability. The delivery of this ship will restore Canada’s ability to form a naval task group. What a great way to celebrate Canada’s 150th anniversary.”

The Resolve-Class naval support ship will be the largest naval platform in service with the Royal Canadian Navy for the foreseeable future and will provide a wide range of functions from at-sea replenishment of fuels and cargo to aviation support, fleet medical support and humanitarian and disaster relief.

This program involves three levels of innovation for Canada allowing the delivery of a most needed ship in a timely manner and with the best value for Canadian taxpayers. Firstly, instead of building a ship from new, a modern containership has been converted into a state-of-the-art naval support ship. Secondly, the ship has been privately financed by Davie and will be leased to Canada–that means a fixed, transparent cost to the Canadian taxpayer. Thirdly, Federal Fleet Services, Davie sister company, will operate the ship with a mixed crew of merchant seafarers and Royal Canadian Navy personnel.