Jumping into the Melt Pool

The manufacturing industry was built on the process of metal removal, but having a lathe, mill or multitasking machine capable of adding material to a workpiece as well as removing it makes a lot of sense. Such a machine would make it possible to build up a round boss on the side of a turned shaft, or machine internal cavities in the face of a milled part before adding material to the top, closing it up forever. It sounds futuristic but it’s hardly science fiction. Hybrid additive machine tools typically employ a laser to melt metal powder or wire feedstock as it makes contact with the workpiece, building up features one layer at a time. Every so often, a cutting tool swoops in to clean up these rough 3D-printed surfaces, and the process repeats until the workpiece is complete.

Join the Hybrid Club
There’s no shortage of companies climbing aboard the hybrid additive train. Hermle, Optomec, Fabrisonic, Sodick, and TRUMPF are among a growing list of machine tool builders—many with decades of machining history behind them—that are combining additive and subtractive manufacturing technologies in a single machine. Their efforts have opened doors to part configurations and production efficiencies that were impossible to fathom even a decade ago. 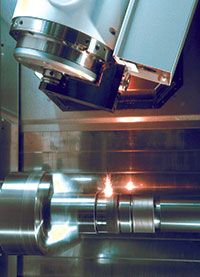 “We’re seeing continued interest in hybrid machine tools,” says Paul Kingsley, senior applications engineer at Okuma America Corp., who supports customers on the company’s MU-8000V Laser EX, an LMD-capable version of its five-axis vertical machining centre. “The challenge is that most shops have only recently begun to get a handle on regular 3D printing, and hybrid additive is a completely different animal. The level of process control that a company has to practice is much higher when you’re in the additive space, and now, hybrid is taking that level even higher.”

Challenging or not, the hybrid additive market is moving forward quickly. Kingsley notes that many of these machines are going to research facilities, but this is likely to change as more manufacturers recognize the immense potential of hybrid additive manufacturing. With that will come advances in CAM software necessary to make hybrid programming more practical, and in-process metrology to assure high levels of part quality.

‘Ambit’-Dexterous Manufacturing
Dr. Jason Jones, inventor of Ambit laser cladding heads and co-founder of Hybrid Manufacturing Technologies Inc., first introduced CNC+DED hybrid machines to the market in 2013, and now plans to make even more machine tools additive capable. “We’ve had the privilege of working with a variety of end-users and machine tool builders in implementing our directed energy deposition (DED) technology,” he says. “Our general philosophy is to take a host platform—a milling machine, robot, or multitasking lathe—and add to it deposition and inspection heads in order to give you a full suite of hybrid functionality.”

As with a number of the systems just described, Hybrid Manufacturing Technologies’ Ambit head uses a laser and blown metal powder or wire to build parts and part features. One significant difference is that Jones’ solution can be retrofitted to practically any machine tool. He has since expanded on this offering with the introduction of the Ambit Xtrude, a polymer extrusion head that deposits thermoplastics at a rate “between 200 and 2,000 times the output per minute as you would from a conventional desktop 3D printer.”

Jones has taken that concept one step further with his unveiling of AXIOM, an acronym for “Automated eXtrusion Into an Open Mold.” The process employs an Ambit Xtrude 3D printing head and CNC machining centre, depositing material into a machined mold cavity and then milling away excess material from the top face of the resulting workpiece. In a recent webinar, he demonstrated AXIOM producing 3D-printed polypropylene headbands for the face shields worn by COVID-19 first responders, although he’s quick to point out that the technology is suitable for a variety of prototype and low-volume applications that might otherwise require investment in a plastic injection mold. 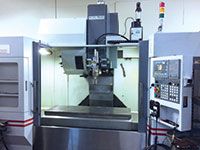 Different Directions
The startup company FormAlloy has developed its own DED process, which “deposits metal with a coaxially-aligned laser/powder
nozzle to achieve faster build times, superior material capabilities, and larger build envelopes compared with powder bed technologies.” That’s according to business development manager Kevin Luo, who explains that FormAlloy’s Form, Enhance, and Repair approach to metallic parts can be used in a standalone 3D printing system, or incorporated into a CNC machine tool for applications requiring hybrid capabilities.

“We’ve developed proofs of concept on both robots and CNC machining centres, showing that we can add a metal deposition technology to various production systems,” says Luo. “That being said, our plan going forward would be to integrate our DED system with a pallet changer and standard workholding of some kind for use in a machining cell. One of the challenges with most hybrid systems is that you can only do one operation—either additive or subtractive—at one time. That, and you have to deal with additive-related contaminants getting into the mill’s or lathe’s cutting fluids. Our integration concept eliminates these and other problems and provides the highest productivity possible out of all the machines in the cell.” SMT