Two years ago, Carl Hungerbuehler realized something was not right. ELPA (Ontario) Inc., the precision machining, welding and general manufacturing firm he heads, had a full order book and a slew of satisfied clients. But operating margins weren’t on par with the amount of work they were doing.

“We reinvest almost all of our profits,” explains Hungerbuehler, who, in 2004, took over the business, that his father Kurt Hungerbuehler had co-founded a quarter century earlier. “However you need to be productive to do that. I knew we had good people. But I also realized they would work better if they had better tools.”

After closely studying the market, Hungerbuehler decided to invest more than $2 million to completely re-equip ELPA’s Ontario plant. The new machinery, which was still being installed when we visited the facility, includes four Matsuura machines purchased from Elliott-Matsuura Canada. These are complemented by a turning centre picked up from Doosan, through distributor Ferro Technique.

Key efficiency boosters at the plant, located in L’Original, a tiny berg adjacent to Hawkesbury, will be two new palletized machines, which can operate with minimal supervision. ELPA’s new five axis machines will also provide significant enhancements relative to its three and four axis variants, due to their 360° rotation B axis spindles.

“The new equipment will increase our efficiency on a variety of fronts,” says Hungerbuehler. “Our people will be able to take on a greater variety of tasks and accomplish them more effectively. But most importantly, it will enable us to better serve our existing client base by offering them a wider range of capabilities. We have always prioritized quality and service and that will not change, however, in addition to being incredibly precise, the new machines are also workhorses. That means that we can significantly boost production volumes by running them for two shifts a day, and even three shifts, if the need arises.”

He adds that the company philosophy has always been “change or die. In our case that means we need to grow. Our target is thus to double sales during the next five years. We have a great customer base. But we also know that if we don’t supply a broader range of products and services, then they will be forced to look elsewhere.”

Hungerbuehler’s wants to take the company to the next level. One strategy is finding compatible acquisition targets. Five years ago, ELPA acquired Cawa Precision, a competitor based in nearby Vankleek Hill from its owner Ray Martel.

In the process, he also picked up Martel himself, who today acts as chief operating officer of the combined operations. “We initially got to know each other when Ray asked us to do some subcontract work on a large project,” explains Hungerbuehler. “However our chemistry was so good, we kept talking and talking. Pretty soon we talked ourselves into a deal.”

“Today the move is really paying off,” says Hungerbuehler. “Having an experienced manager like him around enables me to delegate a lot of work. I also know that if I need to be away for an extended period of time that things will be taken care of.”

The Cawa Precision acquisition worked so well that three years later, in 2014, ELPA also acquired D.P. Digital Precision. The Laval, QC-based EDM firm added another key capability to the combined operation, as well as better diversification due to its strong client base in the aerospace sector. 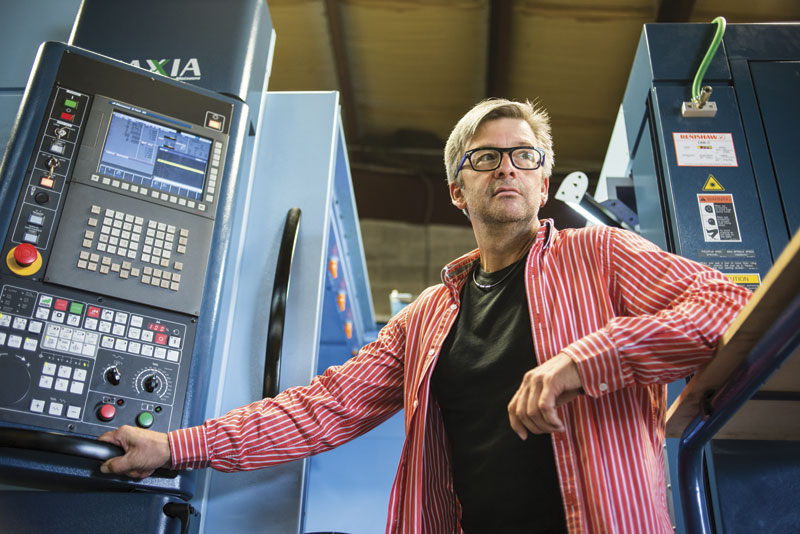 Another important step that Hungerbuehler took was to diversify ELPA’s sales, which at one time were heavily reliant on a local client Ivaco Rolling Mills, a local producer of steel billets and wire rods. “During the 2009 recession they shut down their factory for almost six months, and we barely got a single order,” says Hungerbuehler. “I realized then that I had been putting too many eggs in one basket.” Today ELPA has a broad range of clients in a wide variety of fields including defence, mining and simulation products. Their one common denominator is that they all are strong exporters. ELPA, which does not export a lot itself, is thus positioned to benefit from Canada’s current favourable currency environment–if he can help those clients take advantage of it.

Hungerbuehler doesn’t use financial or quantitative methods to gauge customer satisfaction, preferring instead to rely on human factors. “My goal is to put a smile on my clients’ faces. If I do that, I know we at ELPA are doing our jobs.”

That said, ELPA’s growth hasn’t come without challenges. These include finding young, qualified and motivated workers, that pay attention to detail. “Kids today are not getting exposure to the trades that we did when we were in school,” says Hungerbuehler. “The shop classes we took are a thing of the past.”

Hungerbuehler says even graduates from trade schools, including one in nearby Ottawa, aren’t fully qualified when they go out into the job market.

“They know the basics,” however they generally also have a lot to learn. So we have to bring them along slowly.”

That said, once employees join the firm and set up roots in the local community, they tend to be loyal. Hungerbuehler says turnover last year was near zero.

Like most entrepreneurs with families, Hungerbuehler, who has three kids, thinks long-term. However he has yet to see any interest in the company among his offspring–though the door is open.

“We are already a family business here,” says Hungerbuehler, gesturing towards his employees with a smile. “They are my family.” SMT