Which is the more capable technology, additive manufacturing or subtractive? Invest in one of these machine tools and you’ll never have to decide

The day will come—and possibly sooner than anyone thinks—when 3D printing will be as widely-used as other metalworking processes. There will no longer be additive manufacturing and subtractive manufacturing—just manufacturing. Powders and resins will take their place alongside billets and sheets, lasers and deposition heads will be as common as end mills and drills. And just as multitasking machines have combined once-disparate processes such as milling, turning, hobbing and grinding operations onto the same platform, so too will these and other machine tools have the ability to 3D print certain part features.

How do they work? Each of the machine tool builders in this space—DMG MORI, Matsuura, Mazak, Okuma and Optomec among them—has its own unique machine configurations and distinctive approach to additive manufacturing. In a nutshell, however, two types of technology are available: machines that blend three axis machining with metal powder bed printing capabilities, and so-called “blown-powder” machining centres and multitasking lathes.

With the latter, a laser deposition head directs a stream of fine metal powder towards a workpiece while the head’s laser simultaneously melts and bonds the powder to the part surface, building it up layer by layer. You can think of it as cladding, except that the addition of a milling cutter or turning tool able to “clean up” printed surfaces as soon as they’re built means part accuracy is significantly increased, as is the range of potential geometries.

Complex, highly accurate parts can in many cases be built from scratch in a single operation, greatly extending the capabilities of what were already quite capable machine tools. Printed features can be added to previously machined surfaces or previously machined parts, increasing manufacturing efficiency and reducing waste. Add in-process machine probing to the mix and it’s possible to efficiently repair parts such as turbine blades or stamping dies by measuring the damaged areas, adding metal as needed and then machining the workpiece back to its original dimensions.

“We’ve seen great interest from a number of different areas,” says Fischer. “University researchers, for example, are adopting laser metal deposition (LMD) strategies, as are manufacturers that want to be on the leading edge of technology. Of course, there are also companies looking for more efficient ways to develop new products, or who have been hampered by traditional metal-removal processes—all are great candidates for LMD.” 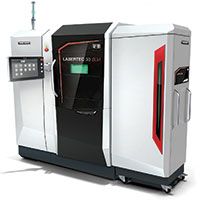 Metal mixers
Fischer explains that the two key features of LMD are material freedom, or “putting the material you want, where you want it,” and geometric freedom, which is the ability to create shapes such as mesh and bonelike structures that would be very difficult if not impossible to produce using conventional processes. Having printing and machining in the same machine tool also makes it possible to manufacture complex internal part features and then “close them up” by laying additional material over the top.

Another capability that falls squarely into the “conventionally impossible” category is the mixing of multiple metals within the same workpiece. Gregory Hyatt, senior vice president and chief technical officer at DMG MORI, says his company’s five axis Lasertec 65 3D hybrid and Lasertec 4300 3D hybrid can create sandwich-like layers of bronze and Inconel, for example, or melt copper with stainless steel, giving users the ability to not only generate bold new shapes, but bold new physical properties as well.

If the thought of DIY metallurgy gives you a headache, Hyatt agrees that this aspect of hybrid additive is admittedly not for everyone, although neither is it all that difficult. “An awful lot of our customers employ engineers with metallurgical backgrounds, expertise that in a conventional environment is needed for quality control of forgings, castings and other sourced metal products,” he says. “So even though these companies may not have been doing additive work in the past, metallurgy is metallurgy, and if someone understands the principles of the science, it’s pretty easy to apply it to additive manufacturing.”

For that matter, the hybrid additive process itself isn’t particularly challenging to master. Hyatt says that what at first glance appears to be a space age, highly specialized technology is actually fairly straightforward. “It’s not a machine for an informal job shop, but its use certainly extends downstream a long way from the NASAs of the world. In fact, we have a number of customers in the die and mouldmaking industries who are certainly quite capable of supporting the machines, and profiting from their use.”

Keeping cool
It’s this final manufacturing activity—mouldmaking—that was in part responsible for the development of Matsuura Machinery’s Lumex-brand hybrid additive machine, a combination three-axis machining centre and metal powder bed printer designed specifically for the production of conformally cooled moulds and mould inserts. As with other powder bed machines, the Lumex builds parts one layer at a time from the bottom up, but the addition of a high speed milling spindle means those layers can be machined as needed for accuracy and surface finish.

More efficient moulds and mouldmaking may have been the machine designer’s original intent, but Tom Houle, director, Lumex North America for Matsuura USA, is quick to point out that the Lumex is garnering interest from a number of additional industries—including medical, aerospace, and tooling manufacturers—for its ability to do what traditional powder bed machines can’t: produce extremely accurate parts and part features. 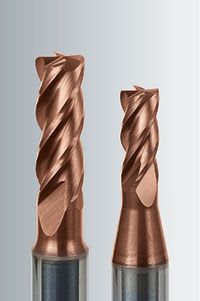 Still, there’s no arguing that the Lumex offers significant benefits to its target audience. “The return on investment is really threefold,” says Houle. “First off, additive manufacturing allows mouldmakers to create conformal cooling channels and porous venting, both of which improve mould efficiency. Secondly, the ability to build a production tool in days versus weeks or months is obviously a huge gamechanger for anyone in this industry. And finally, those toolmakers who are also injection moulders are reaping the additional benefits of cycle time savings, reduced capital expenditure and moulds that are less expensive to run day after day.”

Tooling up
Anyone who’s machined a welded workpiece will tell you the surface is both hard and irregular, leading to premature tool wear; cutting the 3D-printed workpieces just discussed is quite similar. Adam Dimitroff, Application Engineer at OSG Canada Ltd., has a solution, however—a series of cutting tools designed specifically for hybrid additive machining.

“With direct metal deposition (DMD) like that used on DMG MORI, Okuma, and other brands of multitasking CNC equipment, the workpiece surface hardness can be upwards of 50 to 60 Rc,” he says. “There might be sandwich-like layers of disparate metal, and the depth of cut will almost certainly be inconsistent. OSG has developed the AM-EBT ball-type and AM-CRE radius-type end mills to handle these adverse cutting conditions.”

The CRE-series is intended for five axis machining, Dimitroff explains. Programmers should try to cut along the tool’s relatively large corner radius as much as possible, as this maximizes the heat dissipation provided by the CRE’s 60° helix angle.

A six-flute, negative rake geometry helps to minimize chipping while providing maximum productivity. The three-flute ball-nose CRE, on the other hand, is best suited for the centre cutting typical of three-axis surfacing operations. It sports a large chip gash to aid in chip evacuation, and like the CRE, has a negative rake to avoid edge chipping. Both tools are coated with OSG’s proprietary Durorey surface treatment.

“We have a great video up on YouTube showing this, but these AM-specific tools make it so that shops don’t need to change their milling strategies with hybrid machining, like they might have to when using a conventional end mill,” Dimitroff says. “The Durorey coating, together with the negative geometry, means they can plow right through the hard scale, and there’s no worry about the varying chip load common in this environment.” 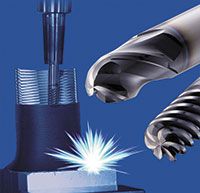 Slicing through powder
Powder bed hybrid additive machines present a different machining challenge, one that any machinist can relate to: chip recutting. There’s no cringe-worthy crunch, crunch, crunch here though, only an end mill prematurely worn thanks to repeated passes through tiny metal chips and fine metal powder, unaided by coolant or air-blast.

In a typical powder bed hybrid additive process, the first few layers of powder are laid down and sintered, after which a semi-finishing end mill traces the part profile, in essence cleaning up the relatively rough sintered edges. A special “necked” end mill resembling a dog bone then reaches under the top layer or two to machine away the small amount of material left for finishing—in other words, a cross-section of the in-process workpiece would have an inverted staircase or hourglass shape. This process is repeated, the finished part profile gradually working its way upwards until the workpiece is complete.

“There are significant thermal and abrasive factors that must be taken into consideration when working with additively manufactured parts, particularly in a powder bed environment,” says Dan Doiron, milling product manager for cutting tool manufacturer Emuge Corp. “Because of this, we’ve worked closely with Matsuura and put a great deal of internal effort into the design, coating and programming of the cutting tools used in these machines. The result is our line of solid carbide Expert and TopCut ball-nose, mini torus and back taper milling cutters, made specifically for this style of hybrid machining centres.” SMT