Getting “the whole picture” on drilling

The event was part of the first drilling conference for cutting tool distributors to introduce them to the new generation of drilling products, says Tom Chevalier, national channel manager for Sandvik Coromant Canada. 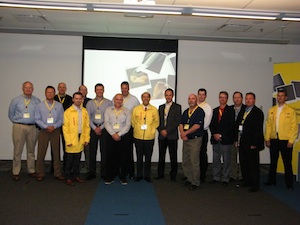 Several tooling distributors were invited to the one-day event, including Jon Varey, president of Varco Industrial Sales Ltd., a distributor of variety of industrial products for manufacturing with facilities in Kitchener, Chatham, London and Windsor, ON.

“Sandvik is our biggest line of products as far as sales and we came to this event to learn more about the drilling products Sandvik Coromant has introduced. This is probably the single biggest event Sandvik has had with a focus on drilling, which is the company’s focus for 2012. The products are fabulous. We brought our people to this facility about six weeks ago and they played with the feeds and speeds on machines in the Productivity Centre and their abilities are beyond what I’ve ever seen.” 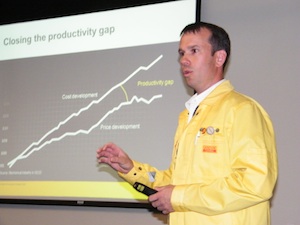 “See the whole picture” is the second smart event that Sandvik Coromant has launched. Several years ago, the company’s “Art of Milling” event was an innovative approach to introducing manufacturers to new products and new milling techniques. This new event takes the same approach and is about providing some insight into drilling techniques and how manufacturers can improve processes, says Aaron Habeck, marketing project manager, Fair Lawn, NJ, who has been spearheading the initiative in North America.

There will be three more events in Canada: June 20 at Sandvik Coromant’s Productivity Centre in Mississauga, ON, August 15 in Alberta, and September 5 in Montreal.