The Trans-Pacific Partnership (TPP), designed to create the world’s largest free trade area, will cost Canada 58,000 jobs according to a US study. 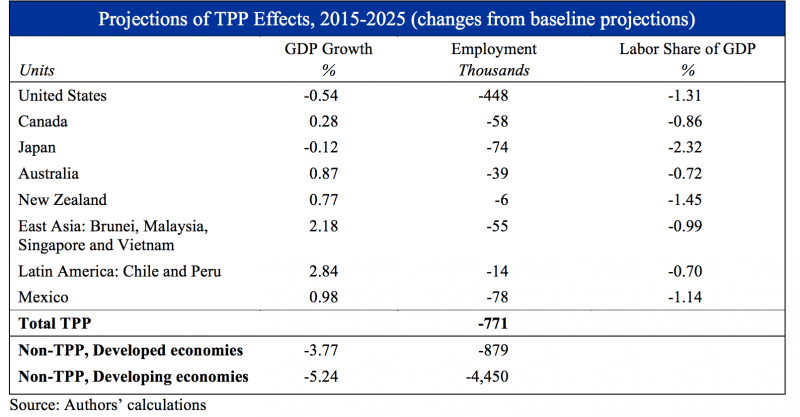 “Trading Down: Unemployment, Inequality and Other Risks of the Trans-Pacific Partnership Agreement” developed by the Global Development and Environment Institute at Tufts University in Medford, MA, says the agreement will lead to employment losses in all countries, totaling 771,000 lost jobs, and that economic gains would be “negligible” for participating countries: “less than one per cent over ten years for developed countries and less than three per cent for developing countries.”

According to the authors of the study, Jeronim Capaldo and Alex Izurieta, with Jomo Kwame Sundaram, “proponents of the Trans-Pacific Partnership (TPP) agreement, the trade and investment treaty agreed to by twelve Pacific Rim nations, led by the United States, emphasize the prospect of economic benefits, with economic growth increasing due to rising trade and investment. Widely cited projections suggest modest GDP gains after ten years, varying from less than half a percentage point for the United States to 13 percent for Vietnam. However, these projections are based on unrealistic assumptions such as full employment and constant income distribution.”

The study also notes that the TPP would lead to higher inequality, with a lower labour share of national income. “We expect competitive pressures on labour incomes, combined with employment losses, to push labor shares of national income further down, redistributing income from labor to capital in all countries. In the USA, this would exacerbate a multi-decade downward trend.”