Successful machining once depended on knowing which knob to turn and what lever to pull. Since the advent of CNC, success depends in large part on one’s mastery of the control. Yes, sound toolpaths and cutting tool selection are important, but so is understanding what G and M codes to use and when, and above all, how to make these mysterious collections of letters and numbers perform as intended.

This situation is only growing more challenging as machine builders add axes to their CNC lathes and machining centres, thus requiring more capable controls. As a result, some programmers might decide to bypass the more advanced functions available on these controls and operate them as they would yesterday’s machine tools, providing less-than-optimal results. Fortunately, CNC control and equipment builders recognize these challenges and are continually working to make their wares easier to operate.

Brad Klippstein, product specialist at Okuma America Corp., notes that these and other control features have been available for years. Using many of them requires no more than the appropriate G-code and associated parameters. The same can be said for a newer feature—dynamic fixture offset—which he says eliminates the need for multiple work offsets and dramatically reduces setup times.

“On our machine tools, this is accomplished with a G605 command,” says Klippstein. “It’s a modal call, and it automatically keeps track of the work offset as you move the part about the rotary axes. It’s a huge timesaver because you no longer have to worry about getting the part exactly on the centre of rotation. This and other functions make five-axis operation easier than it’s ever been.”

Tuning up
No matter how capable the control, however, all machine tools require mechanical alignment and calibration. Given the large number of moving components, pivot points, and potential stack-up errors, this task is particularly important on a five-axis machining centre. Each machine builder deals with this in different ways—in Okuma’s case, the solution is known as 5 Axis Auto Tuning.

Okuma product specialist Errol Burrell suggests it might take a skilled engineer armed with an indicator, gauging blocks, and a magnetic mounted precision sphere a full day to manually calibrate a five axis machining centre. The company’s auto-tuning function shortens this to the length of a coffee break. “You mount a sphere on the table, pick it up with a probe, and press the start button,” he says. “When the cycle stops a few minutes later, your machine is calibrated. What’s more, the system automatically compensates in real-time for any positioning errors during machine operation.” 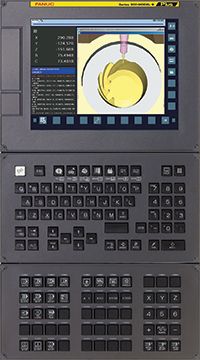 Rick Schultz, aerospace program manager at FANUC America Corp., agrees that such auto-tuning functions can save shops a lot of time, but notes that those “chasing microns” will be well-served by looking at the entire system. This may involve hiring the skilled engineer mentioned earlier, who will analyze the machine tool’s following errors and volumetric accuracy and then fine-tune these variables according to the specific machining application.

Of SUVs and Ferraris
“If your machine tuning is poor, the resulting error will be larger, which means that for an accurate part, you’ll need to feed more slowly,” says Schultz. “It’s a lot like tuning a race car. You can’t just put new tires on a standard SUV and expect it to perform like a Ferrari. You have to evaluate the suspension, the powertrain, the aerodynamics of the vehicle, and make sure that everything is dialed in properly for the upcoming race.”

Despite this warning, FANUC continues to make its controls as user-friendly as possible while also increasing their performance, no matter whose machine tool is using them. To this end, they’ve gathered the most relevant five axis machining options and bundled them into Milling Standard Package III for simplified deployment. These include High Speed Smooth TCP, Workpiece Setting Error Compensation, Smooth Tolerance Control+, and others. 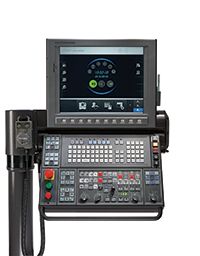 Schultz also emphasizes the need for good post-processors to ensure that shops can take full advantage of their machine tool’s functionality. “That’s where a lot of the magic occurs and is why we actively partner with most of the CAD/CAM vendors,” he says. “Machine tool builders are experts on their products just as software developers and control manufacturers are experts with theirs. Anyone wishing to maximize their machining capabilities should engage with each.”

Moving targets
Gisbert Ledvon agrees. The director of business development for Heidenhain Corp. points out the unfortunate fact that machine tool kinematics change during operation due to thermal growth, and continuous accuracy depends on the ability to adjust for these changes in real-time. To this end, the company has developed its KinematicsOpt software option, which allows manufacturers to periodically and automatically measure their machine tools, then compensate for any errors.

“There are a lot of very high precision five axis machining applications throughout Canada,” he says. “Obviously, you need a powerful control like our 640-series if you’re to meet these requirements, but you can’t just focus on the CNC, and must instead look at the entire system. This includes the motion control, the feedback loop, and as already mentioned, the kinematics of the machine tool. The goal is to achieve the smoothest, most consistent motion possible with the least amount of following error, in turn providing the greatest tool life, part accuracy, and surface quality.”

The control must also make some tough decisions, and do so quickly and independently. In Heidenhain control-speak, this is called advanced dynamic prediction. Ledvon offers a simple example of a CAM system “spitting out one hundred points” in a three-dimensional tool path. A smart control will understand which of these points are necessary to achieve the desired part tolerance, then automatically eliminate the ones that would lead to slowdowns and surface mismatches. “For mouldmakers, medical manufacturers, and those in the aerospace industry, this level of control intelligence is a game-changer,” he says. SMT