EMO 2013’s theme “Intelligence in Production” was aptly named and clearly in evidence among many exhibitors.

The world’s largest event for the metal product manufacturing industry ran September 16 to 21 in Hannover, Germany. More than 140,000 people from more than 100 countries attended to see the 2,100 exhibitors.

While many manufacturing technologies made their debut at the event, several exhibitors were more focused on showcasing how they could enhance the manufacturing experience for their customers–and it goes beyond simply offering new products.

Seco Tools has launched MyPages, a service platform that allows the exchange of data between customers and Seco technical support staff.

“This is an interactive system and is like an experience exchange between our customers and Seco,” explains Heinz Peter Boost, head of product management for Seco Tools, based in Erkrath, Germany. “For instance, we will write test reports on tools we’ve tested and customers will be able to access this information and also provide feedback on their experience with the tools.”

Walter’s concept is called Walter Xpress. The company announced an expansion of the service, adding drilling and reaming tools with inserts.

“The overall direction we are taking right now is to focus on services and software,” says Muff Tanriverdi, president of Walter USA, LLC, who spoke with SMT at EMO. “The reason is that as skill levels degrade, people have a need for competence and we have just announced Walter Xpress to address this.” The service is designed for faster delivery of special tools and puts the information into users’ hands. Customers provide specific parameters for special tools and the system takes the information and designs and calculates the required tool with a 3D drawing, within a short period of time of approximately four weeks.

The decline in skill levels among trades people is pushing manufacturers to create more user friendly, but also smarter machines. Machines are being built with automation in mind.

“There has been a paradigm shift; it used to be about cost reduction and eliminating people and getting robots,” says Greg Hyatt, senior vice president and chief technical offer with DMG Mori Seiki USA. “Now manufacturers want the skilled people but they can’t find them so the only way to grow is through automation. But automation is also growing because of the need for consistent quality.” 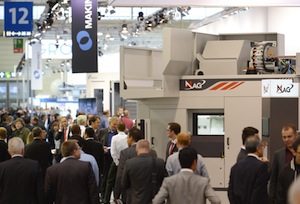 Automation is only one component of today’s smarter machines. Human machine interfaces (HMI) offer more sophisticated control of the manufacturing process and a good example is DMG Mori Seiki’s launch of CELOS. The new HMI will be available for new machines starting in 2014. The system is compatible with PPS and ERP systems, can be networked with CAD/CAM applications and features 12 apps for a variety of functions, such as machine monitoring, machining data and documentation storage, and remote troubleshooting and monitoring. The system uses a customized Smartkey for employees that allows selective access to different functions based on the worker’s level of experience.

“So depending on the level of experience of the worker, the Smartkey provides limited access,” explains Surya Kommareddy, manager for DMSQP-Software and Software technical sales for DMG Mori Seiki USA. “Customers have level one to four access. If someone with level 1 access enters the Smartkey into the system, any keys associated with level two, three and four level are locked and not accessible to that person.

The two respective companies behind DMG/Mori Seiki announced a name change. Gildemeister AG and Mori Seiki Co. Ltd. will change their respective names to DMG Mori Seiki Co. Ltd. Going forward, the new brand name that will appear on the machine tools will be DMG Mori. In Canada, the cooperation will be known as DMG Mori Seiki Ellison Technologies. As part of the rebranding, the company unveiled 15 new machines with a new unified design featuring larger windows and two colour options of black and white.

United Grinding underwent a re-alignment of its corporate identify. Known by its parent name Korber Schleifring globally and by United Grinding Technologies USA in North America, the company has renamed itself United Grinding, Korber Solutions.

“We’ve done a good job in North American establishing the brand name and the company decided it made sense to use the United Grinding name globally,” says Rodger Pinney, president and CEO of the newly renamed United Grinding North America. “The tagline of Korber Solutions is an indication that we’re providing a solutions approach, which is what our customers are demanding. As part of this change, we’re incorporating a new machine design that features better ergonomics and a better appearance that will appeal to a younger generation interested in getting into manufacturing.”

SMTCL, one of the world’s largest machine tool builders, has undergone some transition. Andrew Heath, international marketing director, says “a new generation of talent has stepped up and the majority of top management is now 45 years old or younger.”

At EMO, SMTCL showcased its new German-lead R&D strategy with the introduction of a new machine, the VivaTurn 4. The slant bed turning centre was designed in Germany by Berlin-based Schiesss Tech, and will be manufactured in China.

Another change at SMTCL is the launch of a new subsidiary company called UNIS. Heath says the new company “will provide end-to-end manufacturing solutions featuring products from both SMTCL and other strategic partners.”

While Europe is slowly emerging out of an economic downturn, industry leaders at EMO say economic growth is more likely to emerge in North and South America and Asia.

According to figures released by the German Machine Tool Builders’ Association (VDW), machine tool consumption in 2013 is expected to hit a value of € 68 billion (CDN $94 billion) and 2014 will see 2.4 per cent growth. Asia is forecast to growth 3.9 per cent, North America will see 0.5 per cent growth and Europe’s growth will be 1.5 per cent. “My personal feeling is Europe will be better, Asia will be worse and US will be stronger,” noted Masahiko Mori, president of Mori Seiki, speaking at the DMG Mori Seiki press conference at EMO.

For Seco Tools, the outlook for economic growth in North America is better than that of Europe, according to Michael Klinger, CEO of Seco Germany. Chris Kaiser, president of BIG Kaiser says sales for the company have been flat but “year over year the last couple of months have been above last year. Manufacturing is growing and that is really growing for us is workholding because people are looking at their processes and how they can improve them.”