Altintas is a professor in virtual machining in the Manufacturing Automation Laboratory at The University of British Columbia. Article content was supplied by Altintas and edited by Robertson.

Original equipment manufacturers (OEMs) and independent shops make significant investments in machine tools for their high positioning accuracy, torque, and spindle speeds to produce high quality parts efficiently. Typically, what limits machine tool productivity are chatter vibrations, excessive deflections beyond part tolerances, spindle torque, and power limits; tool wear, and breakage. The present goal of engineering research is to develop simulation technology that allows machining of parts in a virtual environment ahead of costly physical trials on the machine. Considering that the cost of aerospace parts may range from $10,000 to $500,000 each, virtual machining trials and optimization is vital to achieve first-part production correctly and economically.

In 1999, UBC released the CUTPRO system with unique milling, turning, boring, and drilling process-simulation engines at the core, surrounded by engineering utility tools. This makes the system shop-friendly for machining application engineers. Typically, the technology is applied as follows:

i) CUTPRO MALTF: The user takes an accelerometer and attaches it to the tool tip using wax, and applies five to six impact blows with a hammer instrumented with a force sensor. MALTF is extremely easy to use with human voice feedback that guides the user who does not need to be a modal analysis expert, and does not need to use very costly and sophisticated Fourier analyzers. MALTF measures the Frequency Response Function (FRF) of the tool attached to the machine tool. FRF is used in predicting the amplitude and frequency of vibrations for applied cutting load at various speeds. [Note: Machine tool builders can predict the FRFs using Finite Element methods from the CAD model of the machine ahead of physical prototyping.] 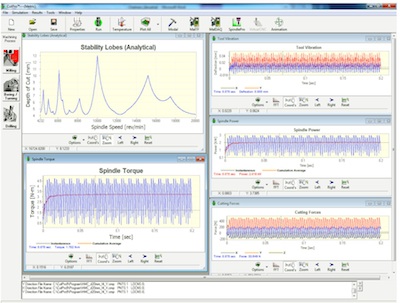 iii) CUTPRO Milling, Turning, Drilling and Boring Modules accept FRFs and/or modal parameters to predict the stability lobes, which indicate chatter-free cutting conditions (depth of cut and speed), as well as virtual simulation of cutting processes. The user selects the most productive chatter-free depth of cut and speed from the stability lobes; and simulates the operation to predict force, torque, power, chip load, bending load on the spindle bearings, vibrations and vibration frequencies.

iv) CUTPRO MALDAQ: Once the planner is happy with the cutting strategy, it can be tested by conducting a short-straight cut or by trying the NC program directly on the machine. MALDAQ can be used to record microphone or other sensor signals during the test. It has machining troubleshooting features that guide the planner to identify the source of the problem.

CAM systems are unable to make a calculated judgement about process efficiency or security and therefore uncritically accept cutting conditions given by NC programmers. NC programmers, feeling the pressure to deliver parts faster, prefer using conventional parameters based on their accumulated experience gained through trial and error type testing over a period of years. Unfortunately, this “one size fits all” approach frequently results in overly conservative toolpaths under-utilizing the equipment and tooling. UBC has been developing next-generation, CAM-based virtual machining technology since 2002 in partnership with Pratt & Whitney Canada and NSERC. We released the commercial version of the software under the product name “MACHPRO” in the autumn of 2011. MACHPRO reads the NC toolpath and part geometry from standard CAM systems, parses the NC blocks and operations, simulates the peak forces, torque, power, deflection errors, and detects the occurrence of chatter along the toolpath. MACHPRO also automatically adjusts the feeds and breaks the long NC toolpaths into smaller segments to reduce the machining time without violating chip load, torque power, deflection and force limits imposed by the user and machine tool. CUTPRO is used at the core of the MACHPRO system. It is designed to be used by process planners to simulate the physical machining of parts ahead of costly trials. It is recommended that cutting conditions are first selected by using CUTPRO, and the NC part program performance is further optimized by MACHPRO afterwards. A sample window of MACHPRO virtual machining system is shown in Figure 2. The aerospace part is machined without any error as shown in Figure 3. 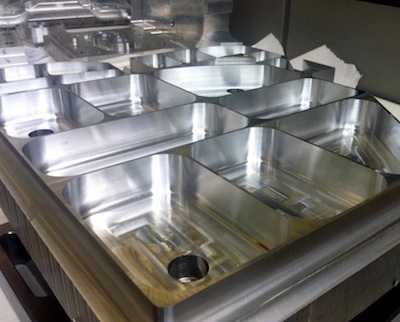 Frequency Response Function: Measured Frequency Response Function of a ¾-inch (19.05 mm) diameter end mill on HSK63 spindle is shown inFigure 4. Each peak at the imaginary part represents mode at a machine natural frequency. The highest peak represents the weakest part of the machine tool structure that affects the vibrations most. In this particular example, the weakest mode is at 1268Hz, which happens to belong to the spindle shaft/tool holder/tool assembly. The chatter will occur at this frequency when the spindle speeds are larger than typically 5000 rev/min.

Stability Lobes: Stability lobe diagram for a four fluted cutter is shown in Figure 5. The machine tool chatters when the depth of cut is more than the lobe limit at a given speed. For example, the depth of cut must be less than 2mm at 5000 rev/min spindle speed. However, the depth of cut can be as large as 8 mm at 7500 rev/min which is 600 per cent more productive. Such pockets are called lobes or “sweet spots” by the operators. If the depth of cut is selected above the stability limits, machine chatters at one of its natural frequencies, leading to severe vibrations, larger chip loads and therefore excessive loads on the machine tool. Vibrations, chips and forces rapidly grow exponentially until the tool jumps out of cut due to excessive vibrations or tool breaks due to forces. The cutting loads on the machine tool, cutting tool and bearings may grow more than 250%, which significantly shorten tool and spindle life. 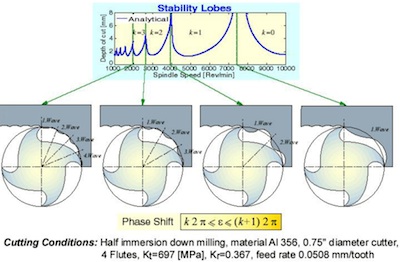 We are designing a special five axis machine tool for our laboratory in partnership with a Taiwanese National Research Center using our knowledge and algorithms. They will build and donate the machine to our lab. We receive machining centres from Mori Seiki through their Machine Tool Technology Research Foundation. We receive the cutting tools free from Sandvik Coromant Sweden, Mitsibishi Materials, Data Flute and from other users of CUTPRO. Siemens provides free CNC systems for research. We still have a lot of problems with chatter, brought forward by CUTPRO users, hence we don’t have to dream and create artificial problems. We are now working on the milling of thin-walled aircraft parts.

Located on UBC’s Vancouver campus, MAL employs five full-time machining and software engineers, a secretary, and an accountant. It has never borrowed any money, and has been profitable since its founding in 1996. CUTPRO and MACHPRO were developed in my laboratory, but belong to UBC. MAL Inc. is a UBC spinoff, and markets CUTPRO and MACHPRO under the license of UBC.

The MAL laboratory consists of 12 graduate assistants, four full-time research engineers (two Ph.D., two masters, and one bachelor), several visiting engineers from industries in Japan, Taiwan and Europe, and several post-doctors, visiting professors, and interns from different parts of the world. Visitors are paid by their companies or governments.

Some customer testimonials: “Most advanced machining software system in the world; I never had a chance to use more than half of it but whenever I ran into a unique problem, we discover quickly that CUTPRO has the solution.” MAL is continually adding new features and conducting research in the laboratory, which is becoming noteworthy throughout Canada and the world in the field of machining and chatter research.