2015 was a good year for TK Mold and Engineering. In the first six months of 2015, it hit its total revenues from 2014, and president Thomas Barr expects his Romeo, MI, company to nearly double revenue year over year.

It’s all because of the company’s investment in a Makino a61nx horizontal machining centre equipped with an FCS modular workholding system. TK Mold can now produce more custom moulds for the automotive industry because of how the a61nx and the new modular clamping work together to significantly speed up mouldmaking.

“Water lines, angled setups, 3D contouring and some things you would have three machines do, you can now do in one machine,” says Barr. “This machine has not stopped running since we installed it. We would not have been able to handle what we’ve got going on without it.”

In part, the company’s success is due to Barr’s philosophy about how to run the business.

In the highly competitive manufacturing marketplace, he says no one can know everything, so everyone in his work family must keep learning. Barr has put that into practice by asking all employees, including himself, to change from their traditional approach of mouldmaking to a more production-oriented method.

Custom mouldmaking needs a facelift
TK Mold and Engineering, located near Detroit, is a family-owned business Barr founded in 2003. Barr has witnessed firsthand the ups and downs of manufacturing, learning how to guide his company through shifting changes in the economy, customers’ needs and technology. In 2013, when faced with increasing global competition and customers’ demands for lower pricing, Barr and his team decided to take a leap forward in capacity and quality. TK Mold would continue to make high quality moulds but would do so in new ways not only less expensive but also consistent and repeatable.

To accomplish this goal, Barr would lead his company through a transformation to approach every job with a production mindset. He wanted TK Mold to move from every job requiring custom setup to a mould handling system that could be set up once and used on every machine on his shop floor. However, to do that, Barr would need new machining technology. 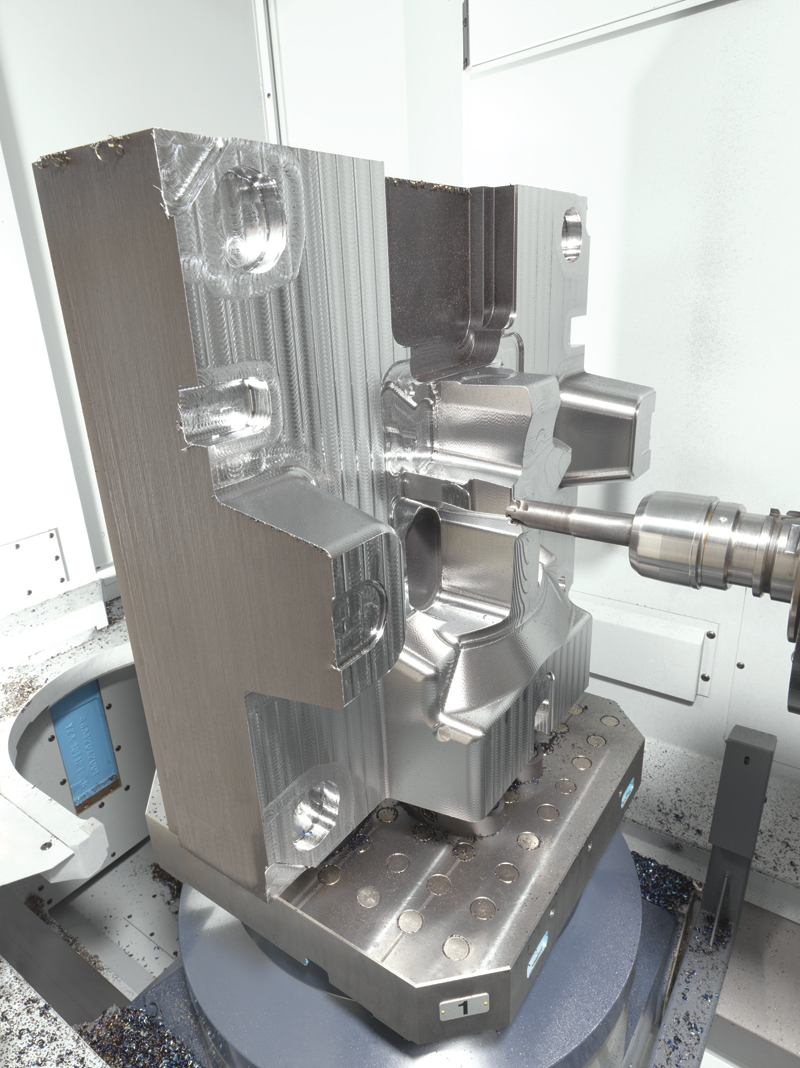 Barr turned to Single Source Technologies because the distributor has been one of his long-time suppliers. He appreciates the knowledgeable support and no-nonsense approach of SST representatives.

TK Mold didn’t make a purchase as much as establish a partnership with SST, which recommended an a61nx horizontal machining center with an FCS modular clamping system. The a61nx, traditionally considered a production machining centre, arms TK Mold with the quality, speed and utilization rates to boost capacity significantly. Simultaneously, the FCS system enables the company to reduce setup time dramatically and focus on achieving a production mindset while still performing one-off mould processing.

Adopting a production mindset wasn’t easy and it required employees to learn how to operate the precision controls for the a61nx, along with techniques that are different from what they were used to when running commodity vertical mills. Among the changes: machine operators now can set up the next pallet outside the a61nx while running another job. That’s typical in a production environment but central to the new approach to mouldmaking that Barr wanted.

“With the ease of setup afforded by the FCS and the second pallet for exterior setup on the a61nx, flexibility has improved dramatically,” says Barr. “Schedule changes are simple with this combination of technology and they no longer require a substantial amount of time or labor. We’re more responsive than ever before.”

Picking up the pace with modular clamping
Since investing in the a61nx with FCS system in 2014, TK Mold has been able to quote work much more aggressively and produce more moulds than the company could make with its previous machinery.

Barr compares the capabilities and capacity of the new horizontal machining centre with FCS to running three standalone verticals, but without the additional manpower or extended setup times.

The combination of the a61nx and FCS has yielded additional benefits. Bruce McGregor, TK Mold’s plant manager, describes FCS as both simple and as complex as a box of LEGO blocks. The FCS system is so flexible with individual parts that it at first seems overwhelming, however, once his operators were able to gain hands-on experience with FCS, McGregor says they could design and build fixtures with ease. The technology enables new employees to accomplish far more than Barr said he was able to do during the same point in his own career. One operator with a year’s experience in the industry loaded a mould onto a machine in a matter of minutes. This same setup once took hours without the FCS clamping system.

Key to the speed and accuracy the FCS system delivers is its precision design. 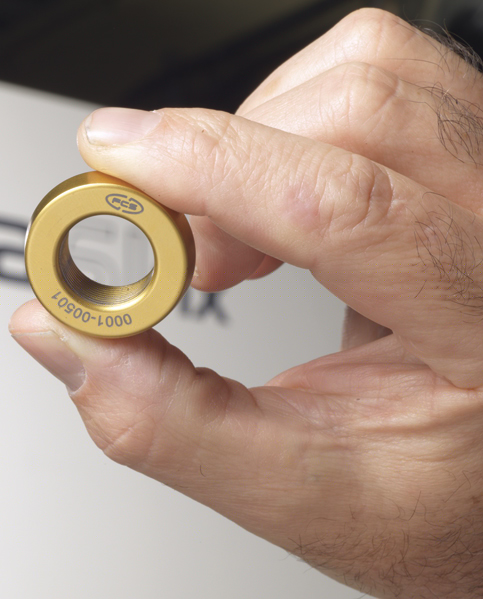 Moulds are mounted on four points bored into the bottom. Once the mounting holes are machined, they become the fixed X-Y reference points for the life of the mould. The FCS system achieves positioning repeatability down to five microns with precision-made clamps and rods that support moulds of all sizes at all angles on a base plate that attaches to a machine’s table. The base plate has mounting points on a 50 mm grid that ensure positioning. No special equipment or maintenance is needed for this system.

Shops that use FCS increase production time by an average of 88 per cent, saya Darrell Johnson, SST product manager-milling consumables. The FCS system makes it easy to recreate the exact fixture needed when another copy of a mould is ordered or moulds are returned for engineering changes or repair. Moreover, TK Mold is no longer locked into manufactured or fixed work-fixture sizes. The FCS system can be used with a mould block of any size and can be taken apart and reconfigured for each specific project.

“Even though your work base is unique, custom, a specialized job, the discipline behind it is a production approach,” says McGregor. “You’re not spending so much time on the art of mouldmaking. You’re spending more time on the production
of the mould. It [FCS] removes or starts to constrain the number of variables so that you end up with a very simple process.”

Additionally, the FCS system has been integrated within other machining centres in the shop. Employees now create fast, accurate setups of moulds and mould components, and move them onto various machine platforms, including vertical mills and EDM equipment. The combined performance of the a61nx and FCS has also led to a 60 per cent reduction in handwork and spotting. EDM processing has been reduced or eliminated in several applications, saving additional time.

As a result, lead-times have improved, along with the ability to meet customers’ demands for delivery. TK Mold can now be more flexible with customers who have urgent needs.

“You can’t have a production mindset in a mould shop without FCS,” Barr said.

A good ROI
Based on these results, Barr anticipates a full return on his investment in the a61nx and the FCS modular workholding system within two years.

TK Mold’s initial results also have confirmed the strategy for achieving Barr’s goals for his company and his family of employees. Each employee can keep learning and growing on the job and feel great about what they accomplish, which is possible because of the investment in the a61nx and FCS work-holding system.

“It’s amazing what the technology enables us to do,” says Barr. “We are creating efficiency for TK Mold and opportunity for our employees.” SMT