Shortly after I began my career in manufacturing, the big kid on the milling block was the Bridgeport Series II CNC mill with a BOSS control. The spindle maxed out at 4,200 rpm and the table rapid traversed at 250 ipm, although only a few of us dared run it that fast. It was an impressive machine. Times have changed.

Today, spindle speeds of 12,000 rpm are common, 20,000 rpm is expected, and 38,000 rpm or greater not unheard of. Yet there’s far more to high speed machining (HSM) than how quickly the spindle rotates.

Without positional accuracy, rpm matters naught. Without high feedrates, cutting tools rub and quickly fail. HSM is a balancing act, one that requires machine tool excellence, tooling to match, the fastest possible computers and motion control, and sensible toolpaths that can marry these machining technologies together.

The view from 61 Neue Straße
Machine builders each have their own definition of HSM, although most agree on the basic principles. DMG MORI, for example, says machine tools designed for HSM need high static and dynamic stiffness, which “almost eliminates vibrations.” Second, heat input must be reduced to a minimum through application of consistent cooling and a thermo-symmetrical machine construction, which guarantees extreme and long-term accuracy.

“Also, machines should have the latest spindle technology, dynamic direct drives, and fast controls like Celos.”

That’s according to Markus Rehm, managing director of DECKEL MAHO Seebach GmbH, a division of DMG MORI. Rehm says HSM has its roots in die and mouldmaking, but adds that industrial sectors like medical, automotive, or optics are increasingly interested in the technology.

“Innovative applications and new materials also raise demand for high speed machining,” says Rehm. “Regardless, the matching of all the relevant machine parameters is decisive. Thus, DMG MORI focuses on the entire process chain—tools, toolholders, CAD/CAM software, cooling liquids, and external influences that determine the results of HSM, as well as an appropriate machine concept able to provide a maximum of precision and the best surfaces possible.”

Imagining the mechanics
Scott Walker, president of Mitsui Seiki USA, Franklin Lakes, NJ, explains it a little differently. “For us, HSM is all about the commanded tool point centre position versus the actual measured surface dimensions of the finished workpiece. For example, let’s say you’re cutting a titanium engine blade on a blisk or IBR (integrally bladed rotor). The cutter’s moving along the outer surface at 120 ipm (3,000 mm) and is commanded to go around the corner of the blade’s leading edge, a very important feature that’s typically held to a thousandth of an inch (0.025 mm) or less. Most machine tools will look ahead in this situation, and slow down around the corner. That’s the only way they can achieve positional accuracy.” 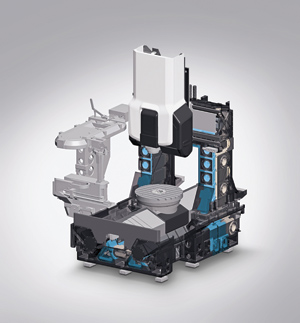 An HSM-capable machine tool doesn’t slow down, says Walker. Instead, it interpolates the corner at the programmed feedrate, instantly reversing direction to machine the back side of the blisk. “Imagine the mechanics,” Walker says. “You’ve got all this mass flying along and it’s suddenly told to change directions. Yes, the machine is made of metal, but still the ballscrews stretch, the spindle strains, the casting and ways want to bend and twist. You need a very stiff machine tool to maintain the commanded position under these conditions.”

Granted, all this machine tool twist and shout occurs at the nano level, but it still must be tightly managed throughout the entire machining volume. There are several things needed to accomplish this. One focus for HSM machine builders is the ballscrew, on which rides a series of balls that are contained within the ballscrew nut. On a typical machine tool, these balls make contact on just two points—during cornering and profiling operations, these two points are responsible for supporting the entire moving mass of the part, fixtures, table, and ways. High speed machines, on the other hand, use specially ground bearings offering twice as many contact points, allowing for greater loading at high velocities.

“The same holds true for the end thrust bearings, the spindle assembly, and other mechanical components,” he says. “Machine tools are not inherently stiff. They are only inherently stiff within their operating capacity. This is true of any machine. The trick is to design the components such that the bending moments and structural yield points are always under control, so that you can corner at high rates of speed and still hold tolerance. The entire machine is simply designed differently, just like a Ferrari has a different design than a Toyota.”

Ironically, those machines that do a very good job at HSM may actually produce surface finishes that look worse than those made on less capable machine tools. This is because the more accurately the machine follows the programmed toolpath, the more it shows every facet and imperfection of the CAD model, something that many machines avoid by “smoothing” between programmed points.

Says Walker, “if you’re trying to generate a point to point surface, as is typical of many profiling operations, you will actually see those shift points in the completed surface finish. The only way to take that out is to add more points in your CAD data. Of course, that means the program can become quite huge, but a lot of people have to do this if they’re making really accurate component dies, for example, or medical parts such as eardrum repair or spine components, where surface finish and profile accuracies are quite important.”

Drip feeds and data servers
The ability to run humongous G-code files is not the problem it once was. Joe Kraemer, manager of national account development at Mazak Corp., Florence, KY, says the need for drip feeding and dedicated data servers has largely been eliminated thanks to the low cost memory available in modern machine tool controllers. “Control memory is huge compared to what was available in the past,” says Kraemer. “Today, unless it’s an extremely large program, you can keep it resident on the control.” 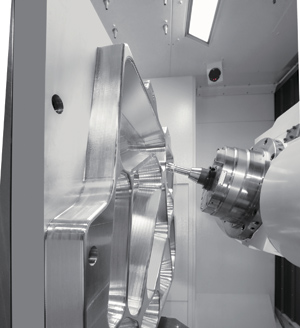 Memory is an important part of the HSM equation, but processing speed is even more so. Mazak and other HSM players boast super-fast controllers that were nothing but a computer engineer’s fantasy even ten years ago. In Mazak’s case, this is its Smooth CNC technology, which according to Kraemer is 30 per cent faster than previous generation Mazak controllers.

“Mould work and three-dimensional aerospace parts are the ones that really tax any machine tool control,” Kraemer says. “You have these free-form surfaces with small step-overs and millions of data points, which are then pushed through the control at the extremely fast processing speeds needed to support the feed rates used with HSM. We work with some aircraft suppliers that are machining large, complex airfoils and similar surfaces at upwards of 25 m/min (1000 ipm). Thermal control becomes critical at these velocities, which is why Mazak uses hollow core ballscrews filled with recirculating coolant, able to maintain temperature to within +/- 1° C (34° F) on most machines.

Kraemer agrees that stiffness and machine integrity are key to success with HSM. “You need the right processor speed, capable tooling, and a very robust machine tool. It’s all about the construction of the machine—the type of cast-iron, linear guide ways and high quality ball screw. Fail on any of these components and it doesn’t matter how good of a machine controller you have.” SMT