In a demanding industry, survival and success require constant improvement

Self improvement is a core value for Omega Tool Corp. Based in Oldcastle, ON, just outside of Windsor–the ‘capital’ of Canada’s mould, tool and die industry–Omega produces plastic injection, compression, R.I.M. and die cast moulds primarily for automotive sector customers, including the large OEMs as well as major automotive suppliers. Customers include Ford, GM, Chrysler, Toyota, FNG, Faurecia and the Magna Group. Omega does a lot of business in the US, and also exports to Europe and Asia.

The 95,000 sq ft (8826 sq m), ISO 9001 certified Oldcastle plant provides tooling, machining and assembly capabilities. Omega has more than 200 employees and generates around $50 million in sales annually, about half of it in exports to the US, Europe and Asia. Omega’s CNC machining centres run 24/7. Large overhead cranes with 60 metric ton capacity play an indispensable role in handling the tooling Omega produces, which can weigh as much as 110,000 lbs.

A strategy for growth
Continuous improvement comes with the territory when you build large, extremely complex tooling for big, demanding customers. It’s been a big part of Omega’s corporate culture since the company was founded in 1981. But several years ago it became an even bigger part thanks to a supplier initiative launched by one of Omega’s largest customers.

Omega was one of some 180 companies that Harbor evaluated based on parameters such as technological capability, flexibility, overall “fit” with Ford, corporate culture, dedication to continuous improvement, and more. When the vetting was complete, Omega took the results and embarked on a five-year plan that included equipment upgrades, reduced outsourcing, better throughput and the development of new standards. Harbor consultants took part in the process.

“We weren’t using simulation at all until we started using the Tebis simulation system in 2013,” says Sal Mazza, facilities resource manager, “It’s had a tremendous impact on our operations.”

The numbers tell the story. Omega’s improvement strategy has boosted utilization rates to over 90 per cent while cutting total machining time by 10 per cent. Overall productivity rose 30 per cent in two years. 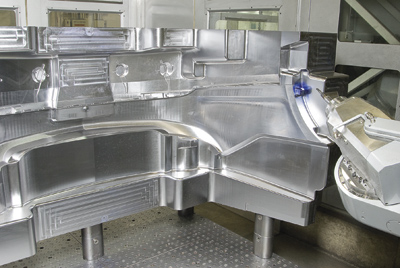 The big guns
As part of its plan to reduce outsourcing, Omega made major investments in horizontal CNC machining. In 2007 it purchased a Makino a81 multi-pallet horizontal milling machine with a four axis rotary table to bring outsourced small to midsized work back in-house.

The a81 features a 10,000 rpm spindle speed, maximum feed rate of 1968 in./min. and 3600 lbs. weight capacity. The unit brought productivity up by more than 30 per cent and reduced manual intervention–with the associated risk of error–more than 20 per cent. The spindle utilization rate is typically over 85 per cent–and frequently above 90 per cent. Omega uses a fixture coordinate system with the a81’s onboard software, which has reduced setup, benching and spotting by over 20 per cent. 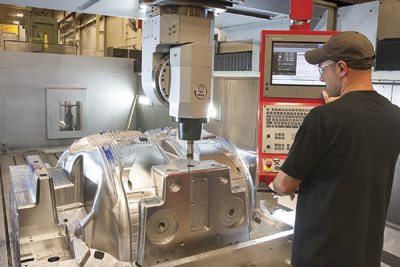 Part of Omega’s plan was also to boost capability on midsized and large applications. At the time, the company outsourced hundreds of thousands of dollars’ worth of midsized and large jobs and wanted to bring that revenue back inside. In 2008, Omega turned to Makino again and procured its A100E horizontal machining centre. The A100E has a B axis rotary table, 132-capacity automatic tool changer – and a 12,000 rpm spindle speed that produces the exceptional surface finishes needed, reducing electrical discharge machining (EDM) and benching operations by over 20 per cent.

Before acquiring the A100E, operators would typically have to perform as many as four or five setups for a job, which represented a lot of time and labour, especially on the larger moulds. Because the A100E can access the mould from every side through the fourth-axis rotary table, Omega reports that setups, even on large applications, are down to two or less. 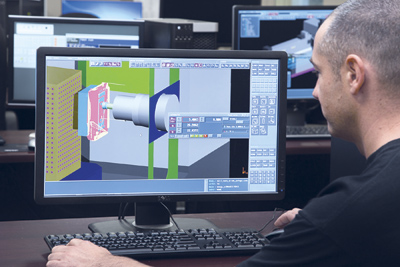 The Tebis simulation software Omega adopted in 2013 was a huge improvement given that Omega’s five axis simultaneous milling is inherently complex and data-intensive. The software has improved equipment utilization rates and throughput, and generated time savings through the ability to do programming offline.

It has also proved its worth when it comes to the “head work” – or 3+2 axis tip angle work–that Omega does. Head work is often required during the machining of large parts, when the machine head has to be tipped to adjust the machining angle. This adds complexity and scope for error. The software allows the operator to click on the machine head and simulate its operation, make necessary adjustments offline and then send the corrected program back to the machine.

Omega has its own in-house validation facility, so that validation doesn’t have to be outsourced or left to the customer. Having validation capability on-site gives customers an added reason to stay with Omega, says general manager Peter Villalta. “We’re a one-stop shopping centre, so it prevents customers from going elsewhere to validate, or going back to their home base to validate. These are all elements that we want to be a part of in order to be able to minimize that validation time.”

In 2014 Omega launched “Omega Tool Canada de Mexico,” a 32,292 sq ft (3000 sq m) high-tech manufacturing facility in Querétaro, Mexico. Employees from Mexico received training in Canada, and Omega has also shipped its own people south to deliver training on-site. The experience and skill set of its employees remains a key differentiator for Omega, as for most companies that have enjoyed similar success.

“On average I think we have from about a 15 to 20 year maturity rate amongst our employees,” Villalta says. “They’re very well experienced, they’re excellent field technicians, they’re great troubleshooters; they’re some of the best – if not the best – in the industry. With the team we have in place here, we can build and manufacture anything you need.” SMT

Written by Andrew Brooks supported with information from Tebis.